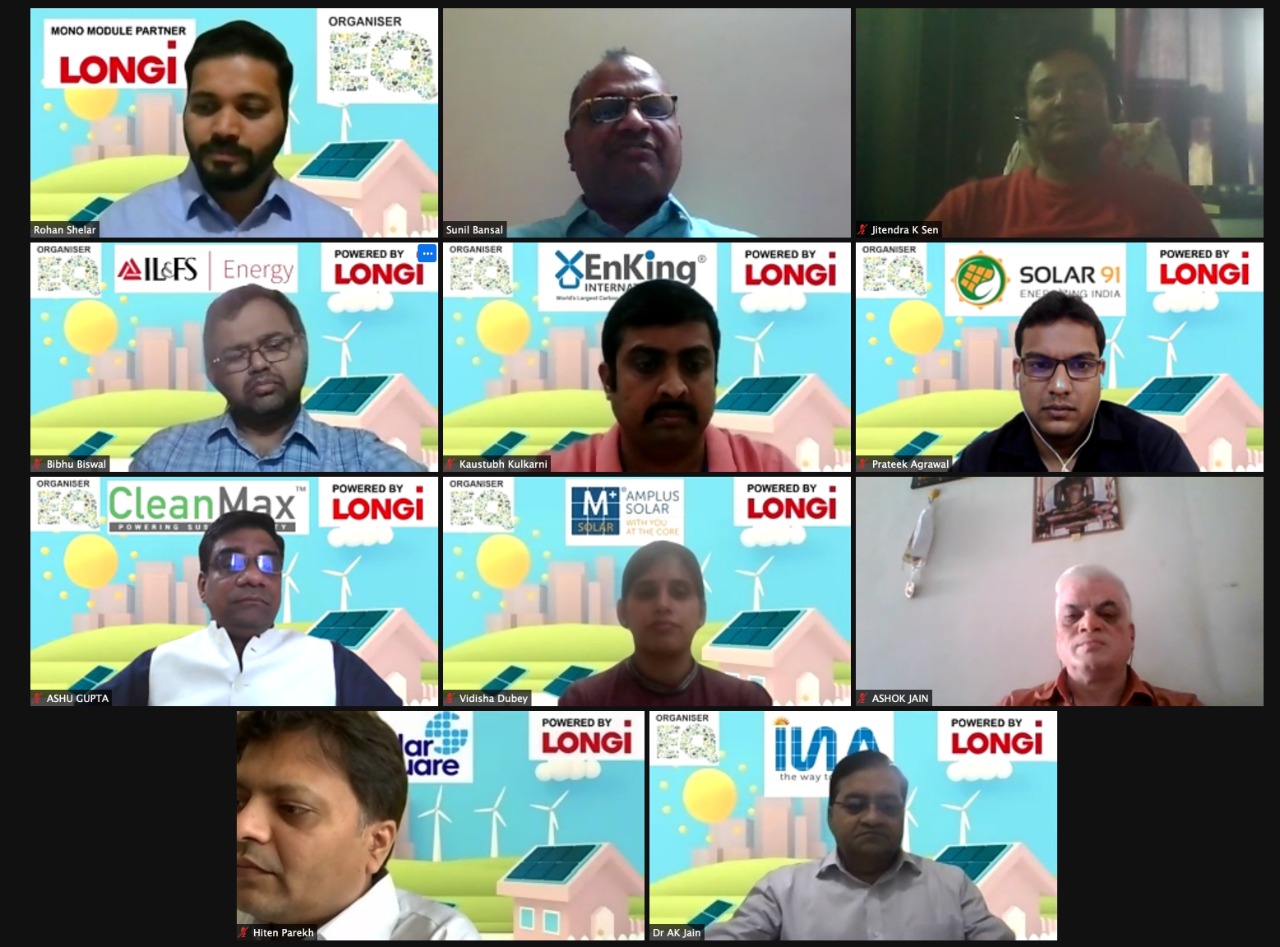 EQ Magazine organized a webinar on Rajasthan Grid Interactive RE Systems Regulations 2021. The event powered by LONGi Solar was conducted on May 13, 2021 at 04:00 pm. The webinar included two sessions. The topic for the first session was ‘Rajasthan Grid Interactive RE Systems Regulations 2021’ and ‘Using Technology for Reducing LCOE’ was the topic for the second one.

RERC Regulations for installation of Grid Interactive Distributed RE Generating Systems were issued on April 8, 2021. The webinar discussed the positive and negative impacts of the Rajasthan Grid Interactive RE Systems Regulations 2021 in the first session. The challenges which were previously faced and the impact on the industry was also discussed. The implications and view of the industry on these regulations were talked over. The discussion was based on how huge the rooftop industry is and how solar energy in Rajasthan can be sustained. The first speaker Mr Prateek Agarwal, Co-Founder & Director, Solar91 Cleantech Pvt Ltd spoke on the regulations and expressed his views on them. He talked about the challenges and changes required for the better growth of the industry. He further spoke on the future of the rooftop industry.

Followed by Prateek Agarwal, Dr AK Jain, Former MD of REIL talked about the future of the rooftop and what is the rooftop for MSME and the country. He said, “It would impact only MSME which is the front arm of Indian Solar business that provides employability and grassroots level engagement to workers. I think without MSME, solar cannot reach people at the grassroots level. MSME works in many ways. It works as a manufacturer, a service provider, an installer, as a consumer and serves as a consumer.”

He further said, “When we talk of regulations, it should take care of all the sectors. It should take care of manufacturers, service providers, entire MSME. As regulator, they should care about how the target will be met and how the sectors will be benefitted particularly the institution and the industries based in Rajasthan.”  He also discussed what else could be included in the regulations.

Vidhisha Dubey, DGM, Policy & Regulatory Affairs talked about the futuristic aspects of the rooftop and shared some of her experiences related to the industry. She further spoke on the positive sides and challenges of the regulation in her views. “On the positive side, they have increased the transformer cap from 30 per cent to 50 per cent and also the contract demand limit has been enhanced from 80 per cent to 100 per cent which is to a certain extent is going to release the block capacity that was not getting tapped due to restrictions. Also, they have implemented the web-based online system for the application and processing of net metering which will certainly bring transparency and speed to the approval process. Coming to the challenges side, we need further deliberation and support from the industry for the further mitigation of these issues.  These are the imposition of cross subsidy charges and additional charges imposed on the RESCO model.” She further said that all of us need to gear up and face these challenges to meet the set targets.

Bibhu Biswal, Senior Vice president, IL&FS Energy Development Company Ltd, spoke next to her about the contribution of IL&FS to rooftop solar. He said, “Basically, the fundamental of the solar of the rooftop. If every roof can have a solar system then probably the large scale projects must not be required.”

Ashu Gupta, Head regulatory and Government Relation, CleanMax spoke after that. He criticized the amended regulations and discussed them in detail. Sunil Bansal then said that the promotional time of the industry has passed from some perspectives. He then invited Rohan Shelar, Dy Manager Channel Business (India & SriLanka) at LONGi Solar to speak.

Rohan Shelar said that the world is currently using 90 per cent mono. “In India, We have supplied nearly 1500MW mono last year.” He further said that our focus is on the long term service of the solar rooftop. He spoke about the achievements of the company. He also discussed the new technologies like mono perc solar technology.

Kaustubh Kulkarni, Deputy General Manager- Sales, EnKing International elaborated on carbon credit and related subjects. He said that carbon revenue has always been an avenue that is not much explored or an underrated avenue.

In the second session, moderator Hiten Parikh, CBO, Solar Square asked Alok Singh, Business Development, Fourth Partner Energy to share his views on the overall Rajasthan Regulation market just as overlap and how technology plays a role to make more yields and returns for the stakeholders. Alok Singh spoke about the financial effects on the customers and the technical limitations or challenges faced by the industries.

Ishan Chaturvedi, Co-founder & Director, Vareyn Solar Pvt Ltd discussed his company and its activities along with approaches towards enhancement of the LCOE and making customers get more returns on their investments. He further discussed the combination of equipment and technology available today that could help to lower the existing LCOE. Followed by Ishan Chaturvedi, Ajay Singh Shekhawat, MD, Ratan Green Energy Services discussed the inconvenience faced by the guidelines and related amendments in detail.

Rohan Shelar further spoke about LONGi and its achievements. He spoke that some things can help to reduce LCOE. “First of all, the first and foremost thing as a module manufacturer, we are doing is trying to come up with the highest possible efficiency.” He further said that there are three to four points that can be discussed while checking LCOE. He said first is the transport cost and other the labour cost which is going to be incurred while the installation. The next is the compatibility of the system and the main thing is value for money, he added. The webinar was concluded with a Q and A session.