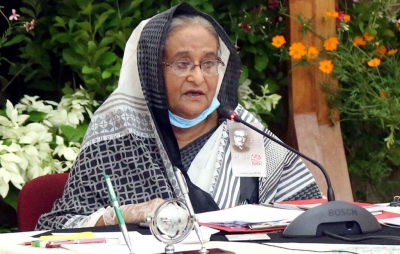 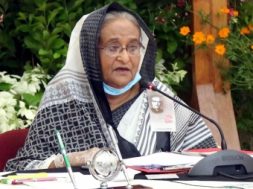 She made the remarks while launching two power plants, 11 grid sub-stations and six new transmission lines vitually from her official Ganabhaban residence on Thursday.

“A huge amount of money is being spent for producing electricity. We’re now importing LNG and we are still giving a huge amount of subsidy to the power sector. But we have to keep in mind that itis not always possible to give subsidies,” she said.

“We’ve taken massive programmes to celebrate the birth centenary of Bangabandhu Sheikh Mujibur Rahman this year and the golden jubilee of independence in 2021 and our goal is to light up every house of the country by 2021,” she added.

The premier said the government was not only producing electricity and constructing power plants, but also making arrangements of transmission lines.

“We’re expanding rural electrification and reaching power to every house by adopting multifaceted plans. As a result, the rate of electricity users enhanced to 97.5 per cent from only 47 per cent and the number of clients increased to 3.74 crore from 1 crore.

“We’re increasing and developing transmission and distribution lines to ensure electricity for all as well uninterrupted power supply,” she said.

Noting that the government has multifaceted the electricity production, Hasina said power is now being generated through gas, coal and solar panel.

“As many as 58 lakh solar panels have been set up in the country and grid line is being set up so that the electricity produced from solar energy can be added to the grid lines,” she said.

The Prime Minister requested the people not to misuse electricity.

“It’s my earnest request to you to maintain austerity in using electricity… you’ll be benefited if less electricity bill comes,” she said.

During the launch, Power Division Secretary Sultan Ahmed made a presentation titled “Power Sector in Bangladesh: From Bangabandhu to Bangabandhu Daughter” on the sector’s development over the last 11 years.

Besides, a documentary on the power sector development was also screened.

While talking about the coronavirus pandemic, Hasina said not only Bangladesh, the entire world is now suffering for it.

The premier urged all to comply with the health codes properly to protect themselves from the transmission of the disease.