Why Is the Narendra Modi Government Selling off a Profit-Making PSU?

Why Is the Narendra Modi Government Selling off a Profit-Making PSU?

Employees call Central Electronics Limited a ‘national asset’, but the government is selling 100% of its stake in the company.

Sahibabad (Uttar Pradesh): It has been a month since employees of the government-owned Central Electronics Limited (CEL) started an indefinite protest demonstration at their factory gate in Sahibabad, Uttar Pradesh.

Four or five permanent employees can be found sitting on plastic chairs in a red makeshift tent right outside the gate every day during working hours. They wear black armbands to work and take turns to sit outside so that even during the protest, the daily functioning of the company remains unaffected. During the lunch break and while leaving for the day, they gather around the tent to raise slogans against the Narendra Modi government and assert their unity in the struggle against attempts to privatise their company.

What does CEL do?

Set up in 1974, CEL aims to ‘commercially exploit the indigenous technologies developed by India’s National Laboratories and R&D Institutions’ and operates in four verticals – solar energy, railways signalling, defence electronics and integrated security and surveillance. CEL has played an important role in the electrification of remote and hilly areas where private players are reluctant to go, and also produces sophisticated products like the Phase Control Module (PCM) that is used in missile systems and is of strategic importance for India’s security.

The company has a net worth of Rs 50.34 crore as of March 2017, employs over a thousand workers (435 permanent and over 600 contractual) and is under the administrative control of the Department of Scientific and Industrial Research (DSIR), Ministry of Science and Technology. 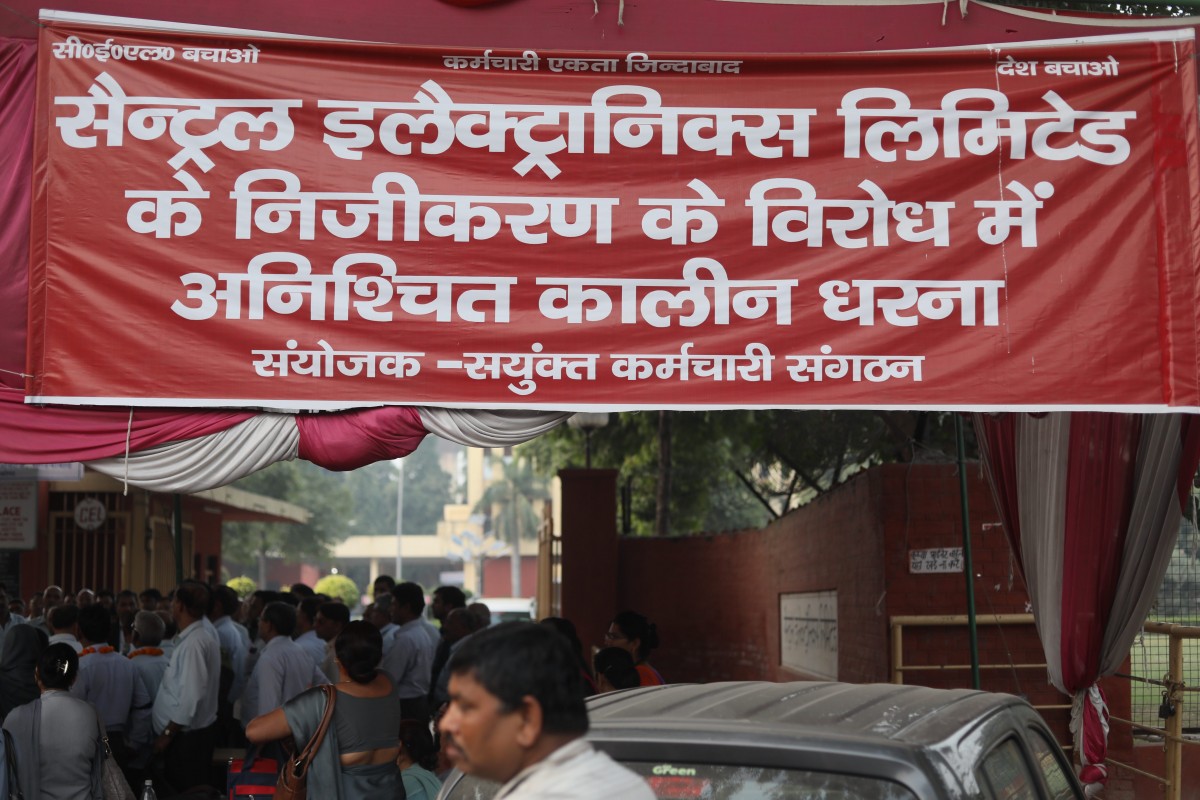 Employees protesting outside the CEL building.

Why are workers protesting?

In 2016, the NITI Aayog listed CEL as one of 74 ‘sick or loss-making’ Central Public Sector Enterprises (CPSEs) to be considered for strategic disinvestment or sale. The government then cleared a proposal last year for 100% stake sale through strategic sale with transfer of management control. The employees have been up in arms ever since, saying that CEL has been wrongly clubbed with other loss-making CPSEs. The employees and executives argue that since CEL is a ‘national asset’ and has also turned profitable, the government should retain control.

When repeated appeals to the concerned authorities fell on deaf ears and the deadline for private bids for sale loomed large, workers escalated their movement by starting an indefinite protest demonstration.

According to CEL’s balance sheets from the last five years, the company has been increasingly making profits (almost doubling net profits every year since 2013-14). It made profits of Rs 16.81 crore (after tax) in the last financial year (2016-17) alone. “We have worked hard all these years to develop indigenous technologies, our labour is finally bearing fruit. We have orders worth over Rs 1,000 crore for this year and expect at least double the same next year,” T.K. Thomas, working president of the CEL Employees’ Union (CELEU), tells The Wire.

CEL had been ‘loss-making’ for most of its existence but started turning in profits in the last five years without the help of any immediate revival package from the government. The employees are confident that the trend will only go upwards. 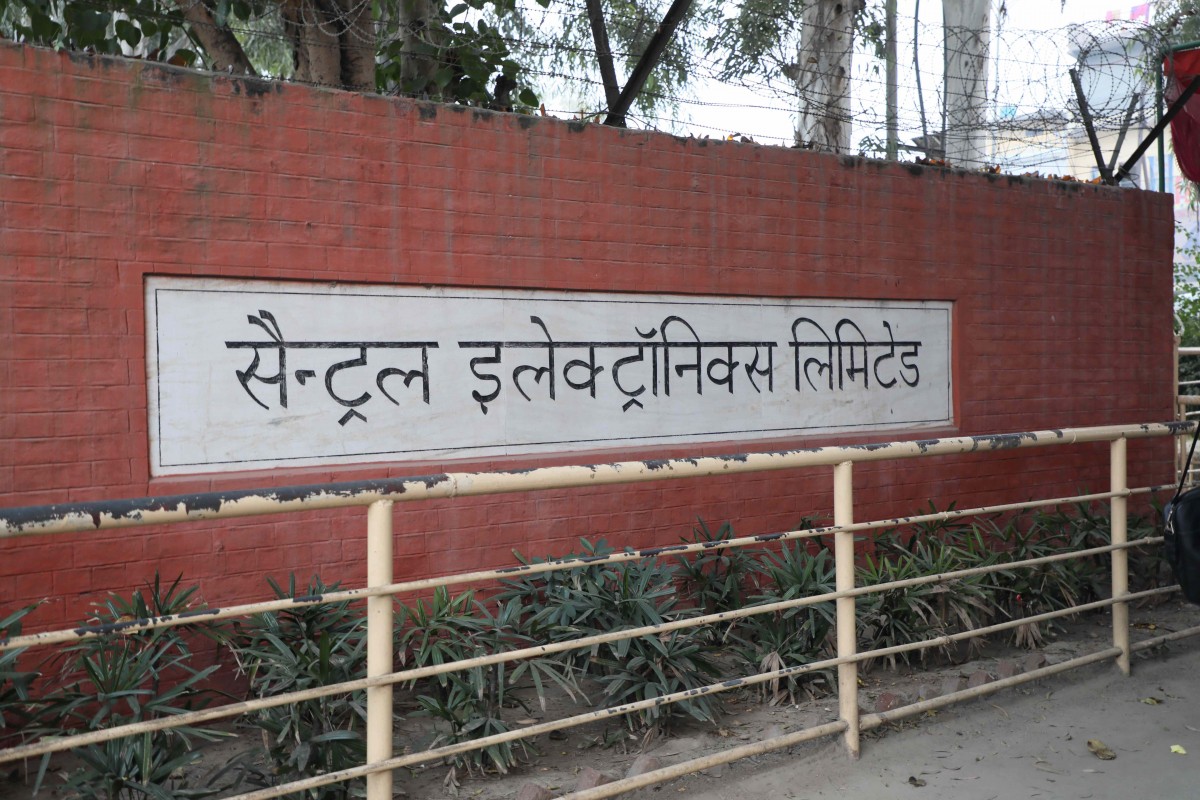 “In addition to electrification and infrastructure projects, we also handle sensitive defence orders which should not be transferred to private companies. We want to help reduce India’s dependence on imports for products we are capable of producing here and boost ‘Make in India’. We have the skills and resources and can do it at a much lower cost than imports, just need support from the government. News of privatisation has only demoralised us,” Virendra Kumar Singh, general secretary of CELEU, says.

CEL has earned wide acclaim for its expertise in design, development and supply of strategic devices and components. It has also done pioneering work in solar power and railway signalling systems, winning many awards including the ‘Leadership Innovation Award’ by the Institute of Economic Studies in 2017 and ‘National Award for Excellence in Cost Management’ by the Institute of Cost Accounts of India, presented by then power minister Piyush Goyal in 2016. 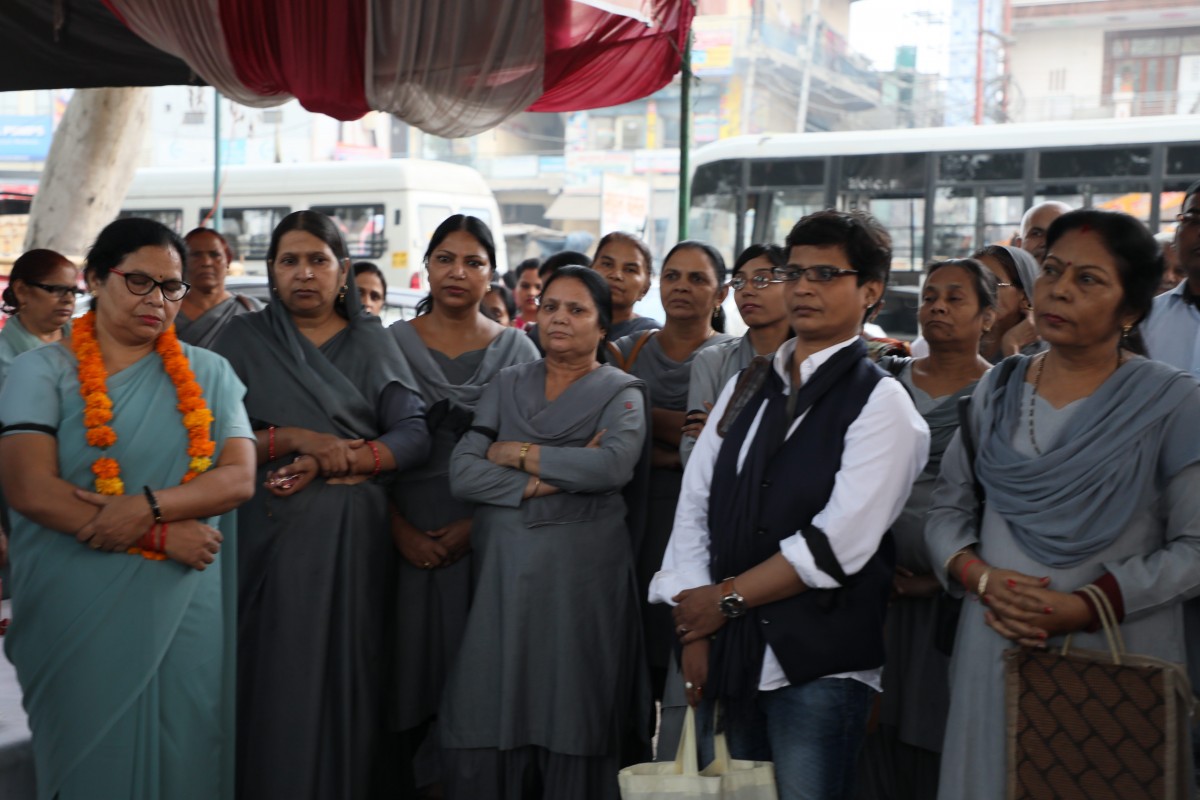 Employees protesting outside the CEL building.

But CEL’s solar photovoltaic operations have suffered due to fierce competition from Chinese counterparts. “We could use some help from the government to invest more on cutting manufacturing costs and innovating further. Solar power is our specialty and we can assure the highest quality unlike private competitors. Instead of encouraging us, the government plans to get rid of us,” a worker says, requesting anonymity.

Prime Minister Narendra Modi has personally been advocating for clean energy, from calling the International Solar Alliance (ISA) ‘the biggest achievement of Paris climate change talks’ to increasing the national solar mission capacity from the current 22 gigawatts (GW) to 100 GW by 2022. “At such a time when India could use all the manufacturing and innovation in solar power it can find, why is a state institution that has pioneered it being sold off?” the worker adds.

In addition to solar power and railways safety systems, CEL has also been working with the Defence Research and Development Organisation (DRDO) and Bharat Electronics Limited (BEL) to manufacture devices and components for India’s defence departments.

Workers skeptical about motive to sell

On being asked what they think could be the government’s motive, the workers allege that it could have more to do with personal favours for politicians and policymakers than genuine concern for CPSEs. CEL sits on 2,41,614 square yards (around 50 acres) of prime land in the National Capital Region, close to New Delhi. Workers fear that the company might not even continue to function after a few years and the new owners will lock it up or use the land for other purposes.

Workers are also suspicious because the ‘Invitation of Expression of Interest’ document has just two major eligibility criteria for interested bidders – they should have minimum net worth of Rs 50 crore as of March 2018, and should have been in existence for at least three financial years as on March 31, 2018. The Wire has accessed the ‘Preliminary Information Memorandum’ and EOI released in September 2018 to confirm this claim. “They haven’t asked for any prior experience in research and development or manufacturing in the EOI document. We fear that CEL might go to private parties with no interest in the work we have been doing here and we might eventually be let off,” Thomas told The Wire.

The workers say they have approached all concerned authorities with their grievances but haven’t received any encouraging response. In a video of the CEL employees’ meeting with Harsh Vardhan, minister of science and technology, he is shown to compare CEL disinvestment with that of Air India. “It’s not just CEL that the government is disinvesting from. We also have companies like Air India, you are very small compared to them,” he says. On being confronted with the fact that Air India was in losses while CEL is making profits, he argues that CEL had also been making losses for most of its existence. He then assures them that he would try his best to help them.

The workers say most of the officials are passing the buck to the NITI Aayog, saying it’s the Central government’s policy decision and there’s little they can do about it. They are determined to continue their protest demonstration till the decision is rolled back and say they will be forced to march to parliament if no action is taken soon.

The Wire tried to reach Nalin Singhal, chairman and managing director of CEL, Shekhar C. Mande, director general of CSIR, officials from NITI Aayog, DSIR and DIPAM, but hasn’t received a response yet. The story will be updated if a response is received. All images by Akhil Kumar.

tags: Why Is the Narendra Modi Government Selling off a Profit-Making PSU?
75
previous Experts focus MNCs’ role in tackling climate change
next Water Board to go the green way

Five trends that will dominate Indian power sector in 2021