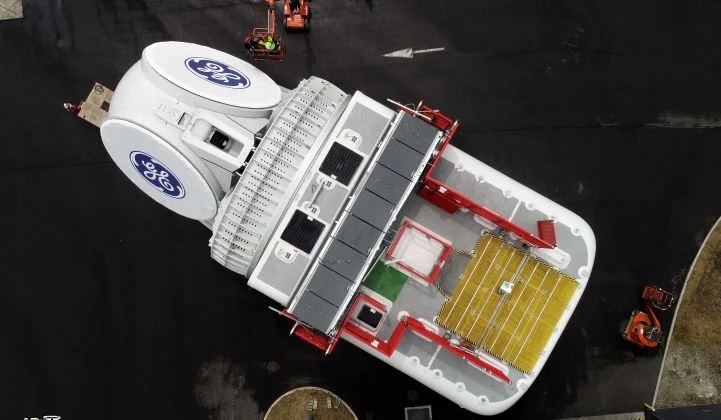 On the day it walks away from coal, GE bags a huge 2.4-gigawatt turbine order for the U.K.‘s Dogger Bank project.

SSE Renewables and Equinor are developing the 3.6-gigawatt Dogger Bank project in U.K. waters, to be built in three 1.2-gigawatt phases. Dogger Bank will provide 5 percent of the U.K.’s electricity once complete in 2026.

The developers confirmed this week that the first two phases will use a 13 MW version of GE Renewable Energy’s Haliade-X platform, with the first power expected in 2023.

News of the huge 2.4 GW offshore wind turbine order came on the very same day that GE confirmed it will no longer supply power equipment to new coal plants.

SSE and Equinor named GE as the preferred technology partner for Dogger Bank last year, shortly after GE unveiled the Haliade-X platform. The order will see GE providing 190 turbines in total, divided into 95 per phase. A single turn of the Haliade-X’s 220-meter rotor provides enough electricity to power a typical British household for more than two days, according to GE.

The final investment decision on Dogger Bank will be made before the end of the year. Preliminary construction work has already begun onshore.

While Siemens Gamesa has a 14 MW turbine in the works, Dogger Bank’s 13 MW machines will be the largest to reach operation in a full-scale commercial project. GE has a 12 MW prototype in Rotterdam that has been generating power since late 2019. That machine will soon be boosted — or “uprated” — to 13 MW, giving it the same blade and rotor dimensions as the proposed turbine for Dogger Bank.

The Haliade-X platform gives GE a route to challenging the dominance of Siemens Gamesa and MHI Vestas in the offshore wind market.

A jobs boost, but the focus is on foundations

Local content is likely to become an increasingly contentious issue in Europe as offshore wind deployment grows and diversifies into new geographic markets. The mature U.K. market is targeting 27,000 direct jobs by 2030; the nascent industry in Poland is targeting 77,000 jobs by 2030 (PDF). In an interview with GTM last year, Danielle Lane, U.K. country manager for the developer Vattenfall, said not every market could reasonably expect to seed a turbine supply chain.

The award of foundations has become a political hot potato in the U.K. and even more so in Scotland.

A decision by SSE to use overseas firms for its Seagreen project’s foundations, rather than selecting Canadian-owned Scottish firm BiFab, was heavily criticized last week. Despite the project being located off the coast of BiFab’s facilities in Fife, SSE said the gap between BiFab’s bid and the winning firms was too large. The steel jackets will be built in China and the UAE.

EDF’s 450 MW Neart na Gaoithe project has also been criticized for not using local fabrication yards. Contractor Saipem has said the bulk of the 54 jackets will be made in Singapore, with BiFab to be awarded “at least” eight. The precise number still has not been confirmed.

For Dogger Bank, a new operations and maintenance base at the Port of Tyne, located in the northeast of England, will create 120 skilled jobs. Able Seaton Port, farther south along the coast, will be used as a “hub for all equipment marshaling, installation and commissioning activities.” That will create another 120 jobs.

GE Renewable Energy has an offshore nacelle facility in Saint-Nazaire, France. Its French blade facility, in Cherbourg, produced the blades for the Haliade-X prototype. GE announced last year that it would add 200 jobs at the factory, from a base of 160. Dogger Bank will use monopile foundations. A supplier will be named later this year.

U.K. politicians have previously talked up the prospects of creating a “Saudi Arabia of marine energy” and the huge job opportunities that would follow. The U.K. has a 40 GW offshore wind installation target for 2030. By the end of 2020, there will be around 10 GW of commissioned turbines in U.K. waters.