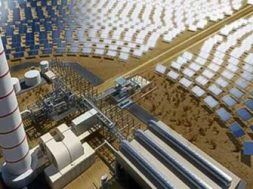 Dubai has unveiled a 950 MW solar power project, the largest worldwide so far, scheduled for completion in 2020.

The project, dubbed Noor Energy 1, consists of a 250 MW PV power facility and a 700 MW concentrated solar power facility and is joint venture between the Dubai government, ACWA Power, and a number of other partners. It is the fourth-stage plan of the 5-GW Mohammed Bin Rashid Al Maktoum solar energy park project. With a total construction cost of US$4.3 billion, it will start supplying power at 7.3 US cents/kWh in 2020.

Many countries are developing concentrated solar power, attracted as they are by its energy storage capability. In cooperation with SolarReserve of the U.S., Australia, for instance, built a 150 MW concentrated solar power station in Augusta in southern Australia in early 2018, capable of generating 500 GW power a year, to meet the needs of 90,000 households and cut CO2 emission by 2 million tons annually.

Morocco broke ground on Noor Ouarzazatew project in 2013, consisting of 510 MW concentrated solar power capacity and 70 MW PV power capacity, the largest such facility until now. The project will be constructed in three stages.