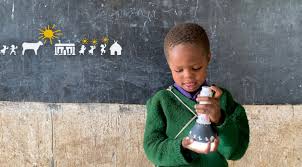 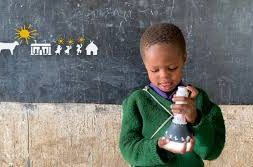 Korea and US-based solar technology start-up YOLK has kickstarted a crowdfunding campaign designed to help hundreds of children from low income families in Tanzania get access to clean energy and education.

The campaign, designed to fund a project called Solar Cow, is aimed at giving incentives to parents in remote villages in Tanzania to send their children to school by setting up dozens of solar charging stations at the schools.

Children could plug in their portable batteries, which are also distributed by YOLK, to the cow-shaped charging stations at their schools and attend classes while waiting for their batteries to be fully charged.

“Many kids in low-income families are often unable to attend school because they must work in order to contribute to their household income. It creates barriers to education, cause energy poverty and curtail economic opportunities,” YOLK wrote in a statement.

“In response, YOLK began fitting Solar Cow charging systems in schools. These encourage parents to send their kids to class rather than work by enabling kids to deliver a valuable and clean energy source to the families,” the start-up firm said.

The portable battery, which was called Solar Milk, is equipped with a flashlight and acts as a power bank to charge small appliances, such as radios and mobile phones. The battery could cater to the basic energy needs of low-income households living off-grid in rural areas.

“Many low-income families rely on kerosene lighting and relatively expensive charging stations to meet their energy needs. The green electricity provided by Solar Milk is therefore a tangible incentive for them to send their kids to school instead of work,” YOLK said.

YOLK launched the first pilot project for the Solar Cow program in 2018 in Kenya. The project received international acclaim, such as being named among Time magazine’s top 100 inventions of 2019 and winning the 2019 Consumer Electronics Show Innovation prize.

According to data from YOLK, the program has managed to increase school attendance by around 8 percent at a rural elementary school in Monduli district, in Arusha, Tanzania.

The Solar Cow also helped raise new enrollment at the school by 10 percent from the previous year.

To further support the program, on Nov. 16 YOLK launched a crowdfunding campaign to fund the installation of Solar Cows in rural areas in Tanzania.

Under the campaign, customers could buy Solar Milk batteries while sending another to a child in Tanzania.

YOLK had created a unique code in each battery given to kids in Africa that records every time it is used. YOLK sends the data to customers who opt to receive the information via email.

YOLK CEO and the creator of Solar Cows, Sen Chang, said Solar Cows could help children in rural areas get access to education.

“There are many challenges to accessing education, especially for kids in rural areas of developing countries. Some 258 million children were out of school around the world in 2018, according to UNICEF. Solar Cows could tackle this problem,” Chang said.