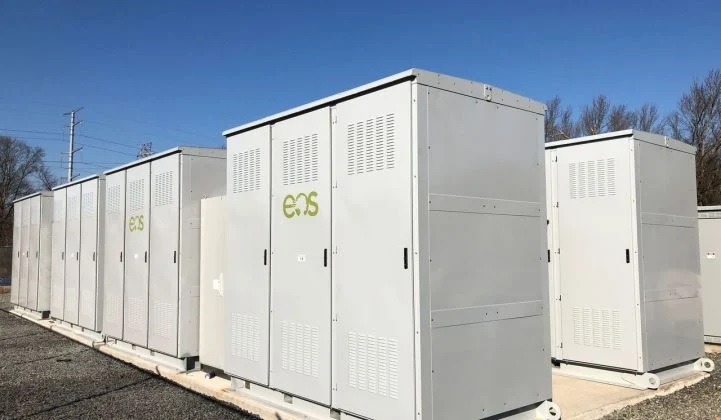 Zinc Battery Startup Eos Kept Afloat in a Lithium-Ion World. Is It Ready for the Public Markets? 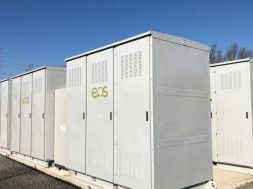 Zinc Battery Startup Eos Kept Afloat in a Lithium-Ion World. Is It Ready for the Public Markets?

Eos Energy Storage spent 12 years building up a technology it says can rival the dominant lithium-ion batteries for storing grid power. Similar startups ran out of cash and fell by the wayside, but Eos has survived, and now plans to leave venture capital behind and enter public markets via a merger with a shell company.

A “special purpose acquisition company” called B. Riley Principal Merger Corp. II will merge with Eos in the fourth quarter of 2020, at which point the startup will become publicly listed on the New York Stock Exchange. The increasingly popular SPAC maneuver allows companies to access public markets without the arduous reporting and roadshow requirements of a traditional IPO.

“This is a company that B. Riley has followed for several years,” said Dan Shribman, CEO of the BPRM II SPAC, in a June call announcing the opportunity. “It is our strong conviction that Eos is at a tipping point that will generate extremely compelling returns for our shareholders.”

Zero-emission truck startup Nikola Motor used a SPAC to go public in June and traders quickly bid it up to a market cap rivaling Ford, despite Nikola’s lack of revenue and having no vehicles in production. Eos and B. Riley hope their SPAC operation will bring in $225 million in new equity to fund a manufacturing surge.

But the energy storage market differs from the vehicles market, and Eos chose a particularly difficult challenge: taking on mass-produced and ubiquitous lithium-ion batteries for the role of storing grid power as more renewables come online.

The startup previously tackled that by claiming aggressively low costs — in 2017, it advertised future pricing at $95 per kilowatt-hour — for a product that took several more years to commercialize than originally promised. Since then, a new team of former GE executives has taken the helm at Eos. The New Jersey-based company has delivered a series of kilowatt-scale pilots and established a domestic manufacturing base in Pittsburgh.

Other novel storage companies, including Highview Power and Hydrostor, put their resources into a handful of megawatt-scale demonstration plants, and then leveraged those to develop even bigger plants. Eos focused instead on building a modest number of diminutive plants, which collectively add up to more than 1 megawatt in the field.

After 12 years and $160 million raised, Eos has reached an inflection point, CEO Joe Mastrangelo said in an interview. It’s no longer proving its technology, but rather is now ramping up for industrial-scale manufacturing, and that requires a different kind of liquidity.

“We looked at it and said, ‘What’s the fastest, most economical way to scale the company and its production and approach to the market?’ — and this was it,” Mastrangelo said of the move to public markets. “It’s going to give us a balance sheet to be able to go after large projects.”

Betting on growth in battery deployments is a solid proposition, but Eos occupies the riskier category of challengers to the dominant lithium-ion technology.

Supply chains for the electric vehicle market and consumer electronics turned lithium-ion cells into a commodified product that sees regular cost declines. But lithium-ion projects are still an expensive way to store grid power, and they can catch fire or even explode if safety systems malfunction. Despite that risk, lithium-ion regularly claims 99 percent market share, according to Wood Mackenzie’s database of U.S. energy storage deployments.

Eos wants to offer an alternative.

It spent the last 12 years developing what it calls a “zinc hybrid cathode” device. Each cell uses a carbon felt cathode that plates zinc onto a ceramic-coated titanium current collector, all of which sits in a proprietary electrolyte solution. This is a static system, in contrast to flow batteries with their pumps and plumbing.

Unlike lithium-ion, it needs no HVAC system to maintain safe operating temperatures, and it can go all the way from zero to 100 percent state of charge.

A few other battery startups targeted zinc as a cheap active material — ViZn Energy, Fluidic and e-Zinc, for instance. But nobody else sells a zinc hybrid cathode, so Eos has to convince customers to try a technology they won’t find elsewhere.

In years past, the company did this by making aggressive claims about cost. In 2017, Eos CEO Michael Oster and VP of Business Development Philippe Bouchard told Greentech Media they were already selling at $160 per kilowatt-hour. If true, that was radically lower than lithium-ion pricing at the time. But the figure had some caveats: It referred to high-volume orders of the DC system and therefore did not include the cost of power conversion or installation.

An earlier rendering of a complete Eos storage system, circa 2017. (Image credit: Eos)

A few months later, Eos pushed the claims further. It issued a press release inviting orders at $95 per kilowatt-hour — for anyone willing to wait five years for 2022 delivery. In 2019, GTM reviewed internal documents in which Eos quoted the DC system cost at $222 per kilowatt-hour, considerably more than the alleged price back in 2017. Oster and Bouchard have since left the company.

In the 2017 interview, the executives also said they would deliver their first multi-megawatt installations, developed and financed by third parties, later that summer.

That still hasn’t happened. Eos did, however, win a deal in 2015 to supply a 10-megawatt/40-megawatt-hour battery that Convergent Energy + Power is building for utility PG&E. Eos investor Fisher Brothers, a privately held real estate firm, was also an early backer of Convergent, which private equity firm Energy Capital Partners fully acquired in 2019.

Instead, the first megawatt-scale installation is slated for the end of 2020, Mastrangelo said. Greek petroleum company Motor Oil Hellas signed a contract for a 1-megawatt/4-megawatt-hour Eos system to shave peak demand at a refinery in Athens. That customer is looking to diversify into sustainable energy, Mastrangelo said, and liked the nonflammable nature of the Eos product. If it goes well, the project could open up business for Eos in the industrial market and oil and gas in particular, he added.

The management team at Eos looks different than it did in the heady days of 2017. In fact, it looks a lot like the upper echelons of General Electric’s power sector leadership a few years back.

Mastrangelo, who became CEO in 2019 after a year as a board adviser, previously led Gas Power Systems at GE Power, one of the biggest gas turbine businesses in the world. CCO Balakrishnan Iyer served as a VP for business development at GE, focused on renewables and smart grid. Former GE CFO Jeff Bornstein is listed as a board adviser, as is Kevin Walsh, who for years led the renewables team at GE Energy Financial Services.

Eos CFO Mack Treece did not come from GE, but successfully developed utility-scale storage as CEO of Viridity, which was acquired by Ormat Technologies.

Since the arrival of the new leadership, Eos has stopped boasting about specific pricing in its press releases, opting instead to emphasize projects in the ground and advances in manufacturing capacity. The company says it now can build 75 megawatt-hours per year and plans to scale to 500 megawatt-hours per year in the next 12 months.

“What I would say is, the windshield in the car is five times as big as the rearview mirror because you’ve got to look forward,” Mastrangelo said. “I think looking forward, it’s bright. I think when you look backward on any company, you’re always going to find…stumbles and things that you could have done better.”

Despite those past stumbles, Eos never ran out of cash — a fate that befell numerous unconventional storage startups including Alevo, Aquion, Imergy, Lightsource Energy and ViZn.

“This company…has survived where others have not and is positioned to grow, and we’re going to grow in a way that’s going to allow the industry to have affordable, safe and scalable energy storage,” Mastrangelo said.

Part of that survival instinct comes from a long history of securing back-to-back venture capital raises through the first half of the decade. The last of those publicly announced raises appears to be a private placement of about $23 million in 2016. Manufacturing partner Holtec International made an unspecified “strategic investment” in 2018.

Leadership boasts that Eos is capital-efficient in its manufacturing process. That, and a few years’ delay in scaling up manufacturing, may have avoided a pitfall that caught Alevo and Aquion: spending too much money on a factory before the market was ready.

How will Eos compete with lithium-ion?

In the time it’s taken for Eos to get to market, lithium-ion prices have continued falling. These days, Mastrangelo says Eos is “highly competitive” on price, which is different from being radically cheaper.

Nor is Eos pitching a vision for long-duration storage, an area where lithium-ion doesn’t scale economically. Eos typically delivers systems with four hours of discharge duration, a format in which lithium-ion competes extremely effectively. But the technology is technically capable of discharge times up to 10 hours with minimal impact on cycle life, CCO Iyer noted.

That leaves Eos to compete on flammability, recyclability and degradation.

Eos says its systems, filled as they are with an aqueous electrolyte, can’t catch fire. That distinguishes them from lithium-ion, which sometimes does catch fire.

The unanswered question is to what extent this distinction matters to customers. A high-profile battery fire and explosion in Arizona last year did not stop a run of record-breaking lithium-ion procurements and corporate investments since then. The results of the investigation into that event, released in July, offers suggestions to eliminate the failures that occurred; leading providers have already adopted several of those principles.

From Eos’ perspective, the consumer preference for lithium-ion batteries reflects a time when cost-effective, nonflammable alternatives were not readily available.

“It’s just a matter of optionality,” Iyer said in an interview. “The more people start using our product, they’ll be starting [to] realize that the option exists.”

Recyclability is a benefit but does not make money for a customer during the asset’s operating years. Lithium-ion cells can technically be recycled, but it is not currently economic to do so.

Field deployments shed light on where Eos may thrive.

Utility Duke Energy installed a 30-kilowatt/120-kilowatt-hour Eos system last year as part of its ongoing exploration of emerging grid technologies. Eos technology adds a new “tool in the toolbox” for grid storage, though it will not replace lithium-ion, said Tom Fenimore, an emerging technologies specialist at Duke Energy.

“Li-ion chemistry will be preferable for projects of 4 hours or less duration and where space (footprint) is a challenge,” Fenimore said in an email.

But Eos was competitive with lithium-ion on upfront cost, Fenimore added, and provided certain advantages when it comes to operations and maintenance, like not requiring air conditioning or fire suppression.

“The Eos chemistry is best suited for daily charge and discharge operations that can take advantage of the full 100 percent depth of discharge capability,” Fenimore said. That could carve out space for daily solar-shifting or backup power applications where the battery cycles every day to reduce peak charges, he noted.

But Eos batteries also have relatively high standby loss, he added, referring to the charge that dissipates while the battery sits around. Daily cycling minimizes those losses.

That’s an early customer with nice things to say about the efficacy and cost structure of Eos batteries. But the 4-hour duration identified as a sweet spot for lithium-ion is exactly the zone Eos has targeted so far.

Winning over shareholders is the next test for Eos. Then comes the battle against lithium-ion.