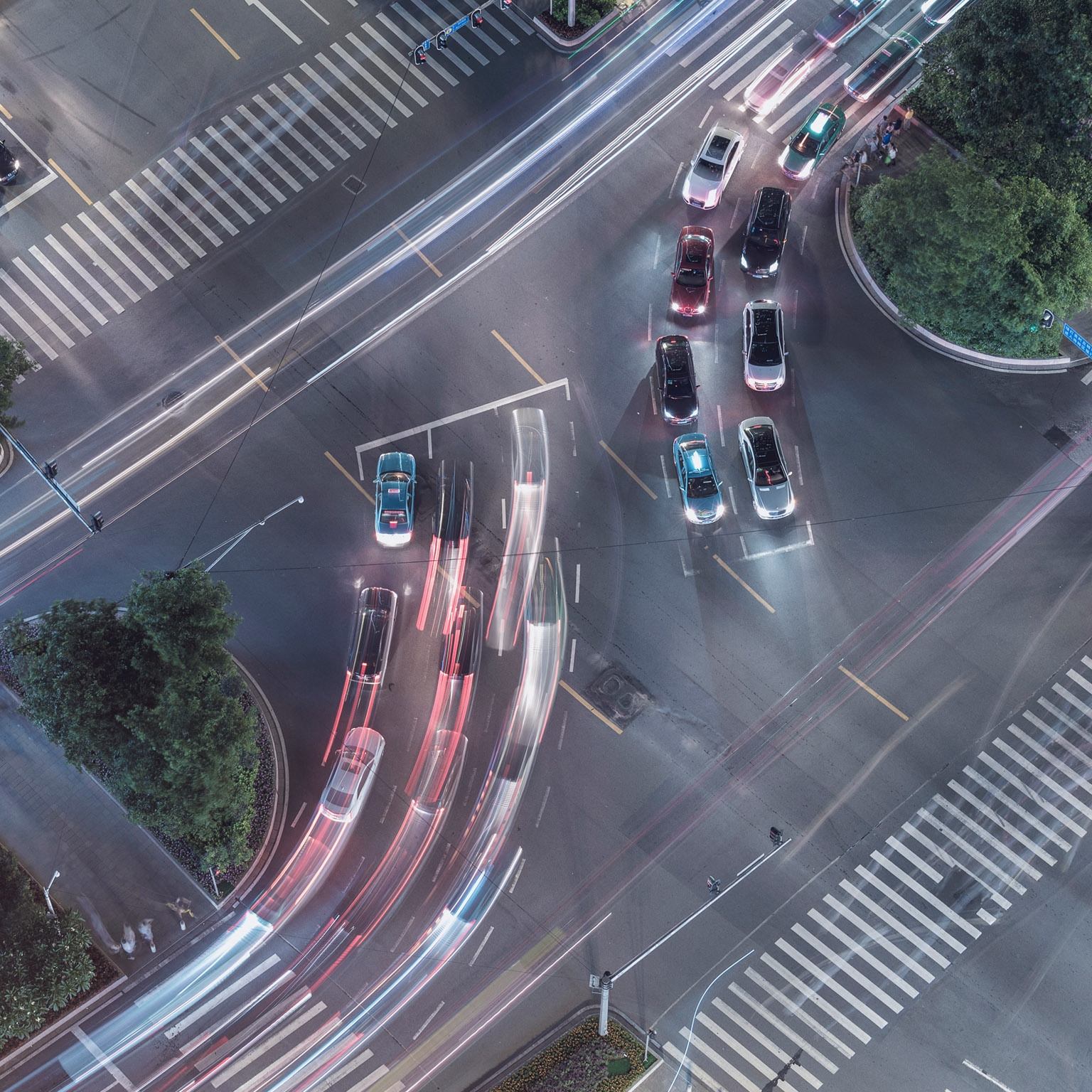 A new look at autonomous-vehicle infrastructure 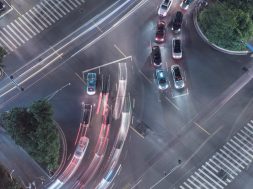 A new look at autonomous-vehicle infrastructure

What infrastructure improvements will promote the growth of autonomous vehicles while simultaneously encouraging shared ridership?

Imagine a future in which fleets of autonomous buses and shuttles effortlessly navigate through city streets to their designated stops. Ridesharing services dispatch shared autonomous vehicles (AVs) to pick up multiple passengers traveling along similar routes. Robo-taxis drop off passengers at subway stops for the next legs of their trips. Some traditional car owners decide that they no longer need personal vehicles because shared-mobility AVs fulfill their needs. Road congestion drops because there are fewer vehicles.

Now imagine an alternative future in which everyone who once owned a traditional car instead has an AV. Many people without licenses also purchase AVs for their personal use, even though they haven’t had a car for years or never owned one. Passenger-miles traveled increase by 25 percent.1 AVs circle while waiting for their owners to finish shopping or running errands if no parking spaces are available, or else they run a variety of errands, ranging from delivering groceries to picking up dry cleaning, themselves. City streets become even more gridlocked.

Which scenario will emerge around the world? The answer will depend, in part, on whether public and private stakeholders invest in the infrastructure required to enable shared autonomous mobility (SAM). But this issue gets relatively little attention now, since companies, investors, inventors, and policy makers are rightfully focusing on issues, such as safety, related to the AVs themselves. Stakeholders will soon begin discussing AV-infrastructure requirements in more detail, however, as they undertake capital planning. Some of the decisions they make now could determine whether SAM gains traction.

To help transportation officials consider the road ahead, we have identified a potential path forward for AV infrastructure that enables SAM. It includes plans for basic structural and roadway alterations that can promote AV growth, as well as improvements specifically geared at encouraging shared mobility. Transportation leaders could think about a phased approach as they consider these improvements—first implementing some infrastructure changes during AV pilots, then making additional accommodations to suit mixed traffic (AVs and traditional cars), and finally creating infrastructure that supports a complete transition to AVs.

Autonomous-vehicle infrastructure at a crossroads

With the right infrastructure to enable shared mobility, multipassenger robo-taxis could account for 500 billion miles traveled on US roads—about 9 percent of the total—by 2030. By 2040, they could account for 50 percent of all miles traveled. In addition to less traffic congestion, vehicle emissions could plunge. With more AVs in use that make fewer errors than human drivers, transportation fatalities could decline. Real estate previously dedicated to parking could be repurposed into commercial or residential properties. These improvements, in combination, could produce economic benefits totaling $850 billion annually.

To get the enabling infrastructure ready for this future state, public officials could determine whether potential transportation improvements promote SAM—both for current AVs and later models that will be fully autonomous. If they design structures with SAM in mind now, they will not have to make costly modifications later. Other related issues to consider include road pricing, zoning, licensing, and insurance.

As the public sector considers potential infrastructure upgrades, it will be important to monitor changes in AV technology. Recently, there has been increasing debate about how much stakeholders should invest in vehicle-to-infrastructure (V2I) systems, such as sensors in roads or street signs that send signals to AVs, helping them navigate city streets. There has also been much industry debate about which V2I technology is most appropriate, with opinion divided about the competing merits of dedicated short-range communications (DSRC) and cellular vehicle-to-everything (C-V2X) systems. Although evaluating specific V2I technologies is beyond the scope of this article, it is important to note the rapid growth of the V2I ecosystem (and that’s true even though automotive OEMs are piloting AVs equipped with in-car sensors and dynamic maps that allow them to operate independently). If public-sector leaders keep these potential technology changes in mind, they will make informed decisions about infrastructure.

Only 41 percent of US roads meet the requirements for a “good ride,” as scored according to the International Roughness Index. Potholes, poor striping, and other maintenance issues not only create safety problems but also present challenges to AVs. If governments consider adopting faster, more efficient approaches to improving basic infrastructure, they could reduce these problems. In addition to improving safety and reducing costs related to vehicle wear and tear, their infrastructure investments would enable AV pilot testing. For example, maintenance teams could restripe poorly marked streets with six-inch-wide, highly retroreflective lines to help prevent cars from wandering off the road. These lines bounce light back to the original source, resulting in greater visibility than reflective lines.

Even after initial repairs are made, road maintenance will be a major and ongoing concern. Deteriorating roads aren’t only a nuisance for human drivers: they are major impediments for AVs. To promote higher levels of autonomy, mapping software must be highly accurate—for difficult intersections, for instance, it will need to record dimensions down to the inch. If roads are deteriorating and road markers are fading, the physical structure of the intersection will constantly change. Even minute alterations could thus impede the growth of AVs.

To avoid problems as AVs become more common, transportation officials could consider making more systematic repairs than they have traditionally done. Officials might also think about forming partnerships with mapping companies to ensure that high-definition AV maps are quickly updated, in a cost-effective manner, when essential repairs are made.

In some cases, public officials could use AV growth as an opportunity to improve capital planning for streets. They might eliminate some costly repairs by devoting more funds to predictive maintenance. Such efforts might include sending out drones or AVs to spot potential problems before they escalate. Officials could also consider forming partnerships with various stakeholders, such as utility companies, transportation departments, and cable companies, to ensure coordinated and cost-effective street repairs. For instance, they could agree to conduct repairs and install new utility infrastructure on the same stretch of road simultaneously, or do so in quick succession, eliminating the need for multiple road closures.

SAM may not be an immediate concern for public officials who are busy juggling priorities and dealing with tight budgets. But investing in SAM now could produce some immediate improvements in congestion and transportation, even though traditional vehicles far outnumber AVs. Acting now on a forecasted need is also less costly than acting later on an existing or emerging need.

Structures and accommodations that may be needed to support SAM include the following (exhibit): 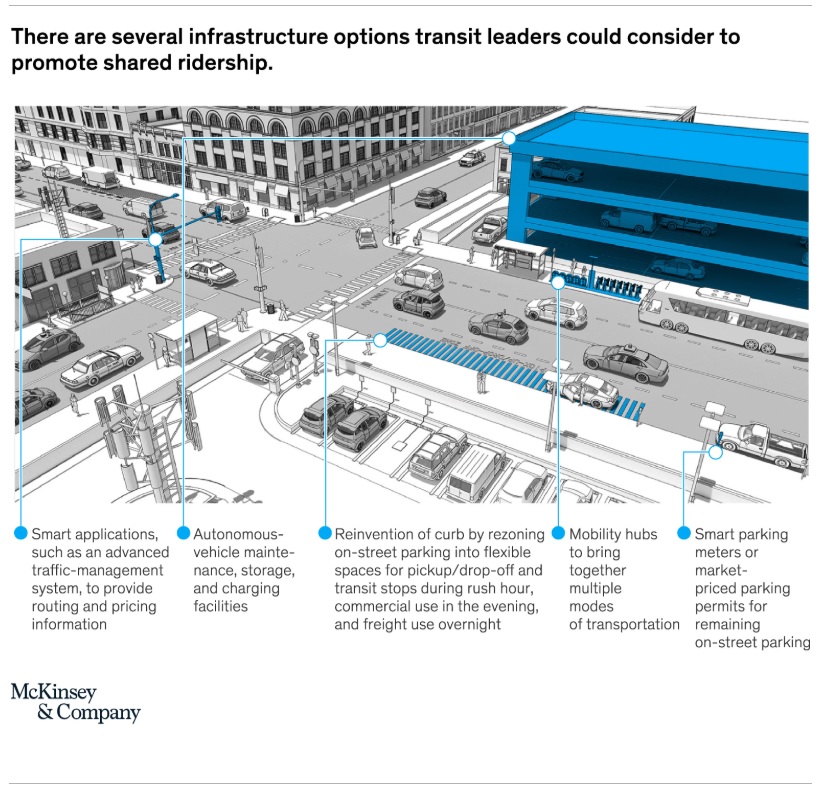 Within cities, at least, a fully autonomous world awaits. Even though this world may be many years down the road, public officials should understand the changes ahead and consider the modifications needed to accommodate such systems. Right now, stoplights and street signs are geared to human drivers. In the future, cities may replace much of this signage with a digital transportation-management system that feeds key information, such as speed limits and turning restrictions, directly to vehicles.

Roadways themselves will also need to evolve as AVs become the dominant form of transportation. For instance, officials might consider the extent to which safety enhancements, such as raised curbs or guardrails, are beneficial. While a distracted human driver might accidentally veer over the curb or into another lane, the probability of such accidents are expected to be lower with AVs. On low-traffic urban streets, it might be possible to expand walkable space without banning all vehicles entirely. Many streets could be narrowed, since AVs will be designed to operate in close proximity to other vehicles with very low risk of collision. AVs will also be smaller if they are fully capable of self-driving—for instance, mirrors would no longer be necessary, and bumpers would be less bulky, in keeping with a different crash-risk profile (fewer collisions overall, and higher proportion of accidents with minor damage).

Federal, state, and local governments are already struggling with budget deficits, and transportation is underresourced. According to the American Society of Civil Engineers, the United States has a $836 billion backlog of highway- and bridge-capital needs.2 Adding to the problem, the growth of AVs and EVs could exacerbate the current funding gap by 22 percent—about $80 billion—by 2040. (Given that most AVs will be electric, fuel-tax revenues may fall by more than half). And without the need to license and register drivers or personal cars, various fees could also fall substantially. These shifts will likely present a daunting financial challenge for the public sector.

Public officials could mitigate the funding gap by finding new revenue streams. When considering their options, it would be helpful if they investigate whether new revenue streams would incentivize or discourage more cost-efficient SAM. In many cases, these streams may come from public–private partnerships (PPPs), which are becoming more common with large transportation projects.

PPPs provide means for encouraging the diverse mix of capital investments that may be needed to support the growth of AVs and SAM. (No single public or private organization has the resources needed to make all required infrastructure upgrades.) With all PPPs, careful consideration must be given to ownership issues, contract terms, and the potential value of the future revenue streams. Prime mobility-related PPPs that encourage SAM might focus on the following activities:

The greater use of shared AVs won’t just change transportation systems—it could also breathe new life into cities. If transportation officials begin looking into SAM issues now, before AVs become widespread, they can create a future in which traffic flows smoothly and predictably, public transportation operates efficiently, and overall emissions drop. Residents could have more parks, restaurants, and businesses to enjoy in their own neighborhoods, giving them a greater connection to the local community. Risks to bicyclists and pedestrians, which have been growing in recent years, could also fall. The benefits that such changes could bring to society and the environment could be beyond price.