June 13, 2019 Anand Gupta
EV start-ups face elimination as Beijing slams brakes on sales with subsidy cuts
They have billions of dollars in funding, backing from China’s biggest tech companies and the world’s largest electric vehicle market at their doorstep. But Chinese EV start-ups face a struggle to survive in the face of intensifying competition and subsidy cuts.

Although analysts are reluctant to name companies that could disappear, the two dozen Chinese EV start-ups such as Nio and Xpeng, which have raised more than $10bn in recent years, are expected to be cut down to a handful.

China’s electric vehicle sales have grown tenfold since 2014 and last year it became the first country to see new energy vehicle sales surpass 1m, about three-quarters of which were pure EVs and the rest hybrids.

But that growth has been dependent on subsidies averaging at Rmb70,000 ($10,100) per vehicle, allowing companies to lower prices. This month, subsidies will be cut to about Rmb25,000 for most vehicles.

That will force companies to raise prices, wiping away one of the key reasons for their sales at a stroke, or accept lower margins on businesses that are already lossmaking.

The cut is expected to reduce year-on-year growth of EV sales to about 20 per cent in the second half of 2019 compared with 60 per cent in April, as consumers rush to beat the end of subsidies, according to Yale Zhang of consultancy Auto Foresight.

Three big groups: BYD, Beijing Auto and Shanghai Auto, accounted for half of China’s electric vehicle sales last year. They tend to sell cheap vehicles: The current top seller, BYD’s Yuan, is priced under Rmb99,000 with a range of 360km. That compares with the price of an imported Tesla Model 3 at Rmb377,000 with a range more than 400km. 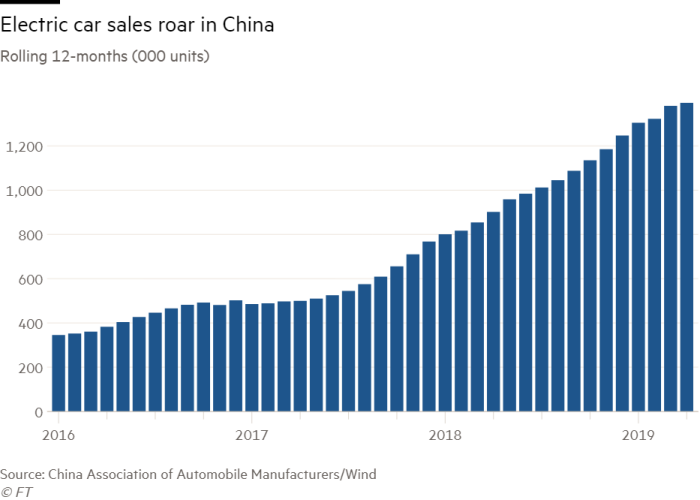 More than 15 venture-capital-backed EV start-ups displayed prototypes at the Auto Shanghai show in April, which they hope can win market share by offering higher-quality at a premium price compared with currently popular Chinese models.

For Nio, which raised $1bn in a US initial public offering last year and sold more than 11,000 electric SUVs priced about Rmb450,000, the cut in subsidies will mean an increase in its prices by about 10 per cent.

This would put the finances of the lossmaking company under more strain, admitted Nio founder William Li. The company reported a $390m total loss in the first quarter of this year, leading it to announce an equity sale to raise $1.5bn from a state-owned fund.

Mr Li warned it was difficult to market more expensive cars as Chinese consumers were wary of paying high prices.

“There are two major problems: charging infrastructure and mindset,” he said, referring to the difficulty of making people switch to electric cars. “Consumers need time to change their way of thinking.”

Companies are facing a tougher fundraising environment. Start-up Byton, founded in 2016 by former BMW executives, accepted funding from state-owned carmaker FAW last month. “Investors are losing their belief in the future of these start-up companies. I don’t see any of them surviving as entities on their own; they will survive as part of state-owned companies,” said Jochen Siebert, of consultancy JSC Automotive.

Competition from international groups is looming: Tesla is planning production from a Shanghai factory this year, allowing it to lower prices for its Model 3. Multinationals such as Germany’s Volkswagen and General Motors of the US also plan to sell China-made electric cars from the end of next year.

Patrick Yuan, an analyst at investment bank Jefferies, said: “The foreign brands will come in and become mainstream in China. The start-ups will remain as second-tier EV makers.”

Growth of ride-hailing apps is also aiding the sector: China’s Uber-equivalent Didi Chuxing said it had 400,000 electric cars in its fleet last year and was aiming for 1m in 2020, though such platforms tend to favour large companies as they buy in bulk. This means that sales of electric cars are expected to reach 1.6m this year.

The heads of China’s best known EV start-ups admit many of their peers will face elimination, but argue that they will survive due to the large amount of funds they have raised, while their links with tech companies give them an edge in an era where cars are becoming more connected.

“When China opened up the passenger vehicle market, there were 500 local start ups,” said WM Motor founder Freeman Shen. “It turns out only a few of them became giants . . . Most of them went bankrupt. I think EV start-ups will follow that pattern.”