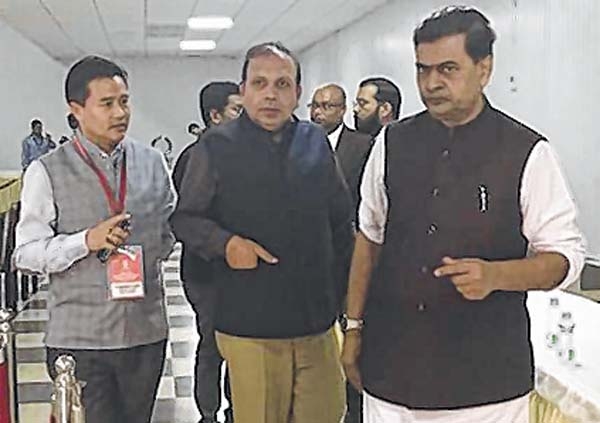 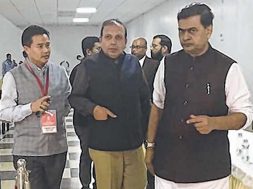 IMPHAL: Apart from conveying that the State Govern-ment has been able to bring down the Aggre-gate Technical and Commercial (ATC) loss to 21 percent from an all time high, Power Minister Th Biswajit has sought assis-tance from the Union Government towards setting up of solar power projects in Manipur during a conference pf Power Ministers from various States and Union Territories which was held at Tent City Narmada, Gujarat.

The conference, which was chaired by the Union Minister of State for Power and New and Renewable (Independent Charge) RK Singh, began from yesterday and concluded today. During the meeting, difficulties and hurdles in ensuring uninterrupted power supply to the common people were discussed in detail.

Speaking at the conference, Power Minister Th Biswajit  said that ever since the coming of the new State Government, Manipur has seen rapid positive changes in almost every aspect.

He explained that in the past the ATC loss was above 30 percent but now it has been reduced to 21 percent and added that steps are being taken up to reduce it to around 15 percent.

Biswajit further conveyed that Manipur and the North East are still behind when it comes to development and stressed on the importance of giving certain emphasis to the North East region for rapid development.

Pointing out that Manipur has great potential for hydropower projects, Bis-wajit informed that the State Government is planning to set up hydro power projects having a total of 479 MW capacity.

Out of these projects, two are major projects with 66 MW and 105 MW capacities, he added.

Despite huge power potential, geographic and eco-technical limitations or constraints pose many hurdles for the State, he said, appealing the Union Government to ensure a funding pattern of 90:10 (Central:State Govts) for the State.

On the other hand, Biswajit informed that against the State’s total 5 lakh households approximately, prepaid electricity meter system has been installed in more than 3 lakh households and added that the Government is trying to procure the remaining units so as to install prepaid meters in the left out households too.

He also appealed the Union Minister to provide every possible aid to the State Government’s attempt to ensure uninterrupted power supply to the people of Manipur.

After listening to the submissions of Minister Biswajit, the Union Power Minister assured to discuss the points in detail with the concerned officials and to do the needful at the earliest.