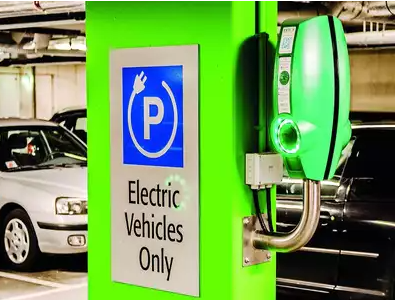 MUMBAI: Bombay high court had recently issued notice to state, registrar of cooperative societies, civic administration and Centre on a public interest litigation (PIL) filed by two south Mumbai residents seeking orders to the state to amend the model bye-laws of the co-operative societies and make it mandatory to provide charging infrastructure in the housing societies for electric vehicles.

Amit Dholakia a resident Bhagwati Bhuwan CHS, Carmichael Road and Sohel Kapadia from Kemps Corner of Bhagwati filed the PIL saying it was necessitated as there is a “legislative vaccum” with no guidelines for installation of electric vehicle charging stations within cooperative housing society premises.

Dholakia said he has always honoured all bye-laws of his society but being environment conscious had purchased a new EV. Its charging time could range between three and 30 hours and hence it becomes imperative to have access to charging station at residential garage given the “scant public charging infrastructure.”

The society, he said, however, denied him permission on May 18, 2022, to install a charging station at the garage citing lack of any policy for such stations. His counsel Nishit Dhruva at the hearing before a bench of Justices S V Gangapurwala and S G Dige said that the State last July introduced a policy to amend Building Code and Town Planning Rules to provide EV charging stations in private and commercial buildings. He said an amendment to the model building bye-laws was proposed.

The HC issued notice to the government and posted the matter next on January 6.

The PIL said, “The Central Government has actively encouraged the adoption of electric vehicles with the idea of shifting the production of new automotive vehicles from internal combustion engine models to electric vehicles by 2030.”

In February 2019, the Central Government made amendments to the Model building bye-laws and Urban Regional Development Plans Formulation and Implementation guidelines, 2014 to make provisions for EV charging points in residential buildings, the PIL said.

In 2021 the State promulgated its EV policy calling for new buildings to have charging facilities, said the PIL adding yet the Development Control and Promotion regulations (DCPR) 2034 contains no provision for EV chargers.

State’s “failure to implement such policies is entirely arbitrary and unreasonable” said the PIL adding that it makes it a violation of citizen’s right to equality, if no rules are framed for existing residential complexes.