WEG, a Brazilian company, has announced the launch of a wind turbine plant in India. The manufacturing facility will come up at Hosur, Tamil Nadu, where WEG has been producing motors and generators since 2011.

Joao Paulo Gulaberto de Silva, Director-Wind Power, WEG Energy, told BusinessLine that the plant will have a capacity to produce 250 MW of machines (120 turbines) a year.

The company expects to sell its first 2.1 MW turbine in 2018. Currently, the company is engaged in market development and setting up the supply chain, de Silva said, on the sidelines of Windergy 2017, an international conference of the wind industry, held in New Delhi last week.

WEG joins the growing list of foreign companies that are setting up or planning to set up manufacturing units in India to make wind turbines.

Knocking on the doors is the 10-year-old Envision Energy, the second largest wind turbine company in China. Envision is understood to be at the last leg of clearances and will soon launch its product in India.

Nordex of Germany has recently set up a manufacturing unit at Gummidipoondi near Chennai. Nordex’s 3 MW machines, whose blades swing a circle of 125 metres in diameter, sit on a 120-metre tall concrete tower — one of the biggest wind machines in India. The company’s CEO, Prasanth Vittal, told BusinessLine that it has already sold 26 MW of machines to Acciona Windpower, an associate company.

A German company called Winergy, which has a plant in Sriperumbudur near Chennai, supplies Nordex the generators.

Senvion, also of Germany, has also dropped anchor in India and has taken over the production facilities of Kenersys of the Baba Kalyani group to make its turbines.

The company last week launched its 2.X MW machines – turbines of rated capacity of 2.3 and 2.4 MW, which come in different rotor diameters.

Danish company, Vestas, after its re-entry into India in 2015, is now licking its paws. In March, it commissioned a blade manufacturing plant in Gujarat; in Windergy 2017, it launched two new variants of its 2 MW machine.

These new entrants join the phalanx of well-entrenched companies, who include multinationals such as the American GE and the Spanish Gamesa, and home-grown players like Suzlon and RegenPowertech.

In the current year, at least 6,000 MW of wind power capacity is to be auctioned – an alluring market for foreign players. 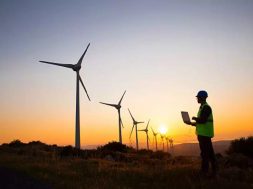