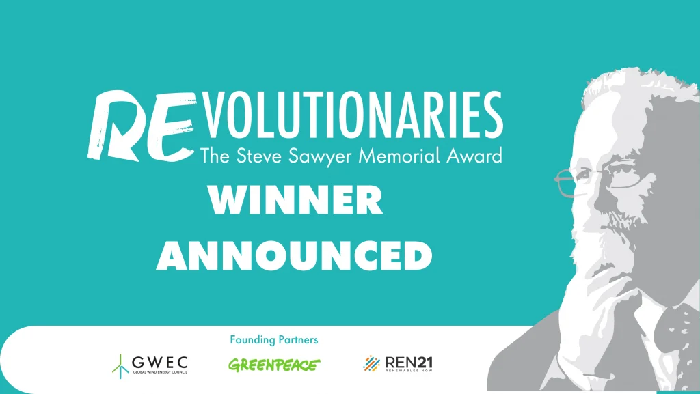 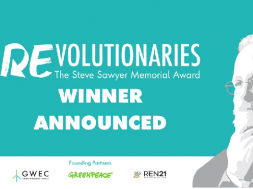 New York : The Global Wind Energy Council (GWEC), joined by Greenpeace and REN21, is delighted to announce Eduarda Zoghbi as the second winner of the REvolutionaries: The Steve Sawyer Memorial Award.

After a delay to the second edition due to the pandemic, the panel were thrilled with the hugely competitive pool of applications the award received. This year’s focus was on the Latin America region, and the panel reviewed entrants from across the public and private sector, a range of renewable energy solutions and civil society. The award was determined by a Jury focusing on five key criteria: leadership, renewable energy, innovation, scalability, and diversity.

“The five pillars of the award reflect Steve’s work: leadership, renewable energy, innovation, scalability and diversity; it is very exciting to find Eduarda shares a passion for these areas.”

“GWEC, Greenpeace and REN21 are very excited to announce Eduarda as the winner of this year’s prize and excited to see how her career continues to blossom.”

Ben Backwell, GWEC CEO, said: “My friend Steve Sawyer was passionate about championing young people who shared GWEC’s commitment to the clean energy revolution. Eduarda Zoghbi shares that commitment and we’re very excited about supporting her work advancing the growth of renewable energy around the world, particularly in Latin America. The five pillars of the award reflect Steve’s work: leadership, renewable energy, innovation, scalability and diversity; it is very exciting to find Eduarda shares a passion for these areas. GWEC, Greenpeace and REN21 are very excited to announce Eduarda as the winner of this year’s prize and excited to see how her career continues to blossom.”

Eduarda will receive her award during New York Climate week, when she will speak to students at Columbia University alongside Ben Backwell about the energy transition and the renewable energy secretary. Eduarda will receive a comprehensive prize package that emphasises investment, study, and thought leadership, including a monetary prize, a platform at major events such as COP27, as well as regional energy such as Brazil Wind Power event in October. There will also be opportunities to promote her thought leadership to a global network of professionals in the global renewables industry.

Eduarda is currently the Women Leaders in Energy Fellow at the Atlantic Council, and has recently completed a Masters in Energy and Environment at Columbia University. Eduarda already has a long history of promoting gender equality in the energy sector, as well as being deeply engaged in youth climate organisations such as the SDG 7 Youth Constituency and the BRICS Youth Energy Agency. Eduarda was also chosen to attend COP26 in Glasgow.

Eduarda Zoghbi, REvolutionaries winner, said: ​​”It is an immense honour to be recognized with the “REvolutionaries: The Steve Sawyer Memorial Award”. I hope to carry on Steve Sawyer’s legacy by democratising access to energy in Latin America and breaking gender barriers in the energy workforce. Having served in youth-led climate and energy coalitions my whole career, I wish to use this platform to bring forth these voices and promote a just transition through a people-centred approach, ensuring young people play a pivotal role in achieving the UN SDG 7 targets.”

Arthouros Zervos, REN21, said: “Eduarda’s passion and commitment to making renewables the norm in Brazil and across the continent is inspirational. REN21 is proud to be part of The Steve Sawyer Memorial Award that targets and elevates such talent.”

Kelly Rigg, Steve Sawyer’s wife and Director of the Varda Group environmental consultancy, said: “Eduarda embodies everything we had in mind when establishing this award in Steve’s memory. I have no doubt that she will become an energy leader as she brings together her expertise and commitment to activism.”

Following a distinguished career in environmental and climate activism at Greenpeace International, Steve became GWEC’s first Secretary General in 2007. During Steve’s tenure at the head of GWEC, global wind installations grew from 74 GW to 539 GW and became one of the world’s most important energy sources. He contributed significantly to the development of the wind industry in places such as India, China, Brazil and South Africa.