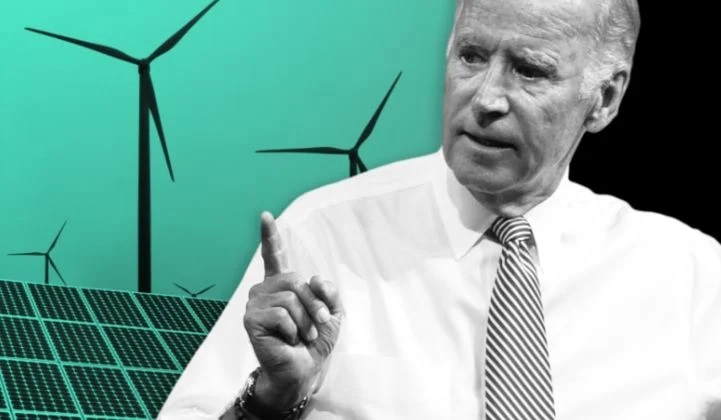 Beating a Senate filibuster is unlikely, but some analysts see budget reconciliation as a way to enact a clean-energy transformation.

Now that President Joe Biden has assumed office, he can get to work on his pledge to move the nation to 100 percent clean energy.

During the campaign, Biden advocated a 100 percent clean energy standard pegged to 2035. This builds on state-level renewable portfolio standards, which spurred tremendous growth in renewables by mandating that utilities buy or produce a certain amount of clean power by certain deadlines. Biden wants to apply the concept nationally while front-loading investment in clean energy and technology to bring down costs.

Biden said he would make this policy technology-neutral, letting power companies choose the portfolio that makes sense to them. Still, coal- and gas-burning plants would have to go, and by 2035. That’s a more ambitious timeline than states that passed their own 100 percent clean energy targets: Hawaii, California and others chose 2045 deadlines. Nearly all major electric utilities have pledged to go carbon-neutral or zero out emissions by 2045 or 2050.

Whether transforming the nation’s electricity system in 15 years is possible remains an open question. Studies indicate that systemic decarbonization is feasible while keeping electricity reliable and affordable. It will surely require an unprecedented ramp-up of renewable construction and grid infrastructure investment, and likely some level of reliance on unproven emerging technologies.

Then there’s the question of political logistics: How, exactly, would Biden enact this plan if he chooses to?

Conventional wisdom holds that a major overhaul of the power system would never attract the 60 votes in the Senate needed to clear a filibuster. If that’s the case, then such legislation may not be doable unless the filibuster is eliminated, something that not all Senate Democrats want to do.

But a contingent of climate policy wonks believes a clean energy standard could materialize through budget reconciliation, a maneuver for passing tax and spending legislation that only requires a simple majority.

Budget reconciliation as a path forward

Budget reconciliation has been used to get around the filibuster before, including to finalize aspects of Obamacare and to pass the tax cuts of 2017. The trick is that reconciliation is limited by the Byrd rule: “Only policies that change spending or revenues can be included,” notes the House Budget Committee’s fact sheet on the topic.

At least five different concepts could achieve the effect of a clean energy standard in language that fits the rules of budget reconciliation, said Leah Stokes, a political science professor at the University of California, Santa Barbara. Stokes is now finishing up a report on the subject, due out in early February, in partnership with progressive data analysis and polling nonprofit Data for Progress and Evergreen, a group formed by staffers from Washington Gov. Jay Inslee’s presidential campaign, which first injected the 2035 goal into the climate policy conversation.

“This is the heart of his bold, ambitious platform,” Stokes said of Biden’s proposed clean energy standard. “The goal of our report is to make it clear that this can be done through reconciliation.”

That’s only possible now that both Georgia Senate seats went to Democrats, giving the party the slimmest of Senate majorities. In another unlikely shift, that majority means that the senator in charge of shepherding a reconciliation bill through the Budget Committee is none other than Bernie Sanders of Vermont, who campaigned on an even more ambitious climate and energy program than Biden’s.

The most straightforward way to craft a clean energy standard via budget reconciliation would be to create a clean energy credit trading system on the government balance sheet, Stokes said.

Under that system, utilities would have to meet a target for zero-emissions electricity. If they don’t, they must buy credits from the government or pay an alternative compliance fee. Revenue from those payments could flow back out in the form of grants to assist the transition to cleaner energy.

“Having some level of competition is going to be important to keep costs down,” Stokes noted.

A national U.S. power market does not exist today. Instead, some states regulate monopoly utilities charged with producing enough electricity, while others participate in statewide or multistate wholesale markets. But the federal auction concept could be designed with different regional markets to account for geographical differences.

If lawmakers choose not to go the energy credit route, Congress could use reconciliation to set emissions targets, Stokes said. If power providers don’t reach them in time, they would have to pay a penalty or alternative compliance fee; if they meet the deadline, they could receive benefits in the form of federal spending.

A similar plan in the report would benchmark carbon-intensity instead of absolute emissions. Some utilities have preferred to set intensity goals, which reflect the carbon emitted to produce a unit of electricity, instead of targeting absolute carbon emissions across a portfolio.

Lastly, Congress could award block grants to states if they pass their own clean energy standard in line with federal guidance. That would keep within the “spending or revenues” guardrails and is reminiscent of policies like Obamacare’s Medicaid expansion or the Department of Education’s Race to the Top program, which rewarded states for enacting policies desired by the White House.

Block grants would keep with the fragmented way the U.S. conducts energy policy; each state has its own rules and regulations governing what power plants can get built and how they fit into the grid system. But going this route could also mean that states that refuse to pass their own policies won’t be compelled to follow. Still, even a subset of states participating could be enough to accelerate the trends making wind, solar and batteries cheaper and more competitive than traditional resources.

Any of these proposals would mark a new level of federal involvement in the electricity sector. But there’s good reason to believe such thinking has a receptive audience in the White House if recent personnel choices are any indication.

Biden’s chief of staff for the Office of Domestic Climate Policy is Maggie Thomas, who advocated for a clean energy standard as political director of Evergreen. Biden also hired climate policy wonk Sonia Aggarwal for the role of senior adviser for climate policy and innovation. Aggarwal, formerly vice president of think tank Energy Innovation, authored a 2020 analysis of policies needed to reach 90 percent clean energy by 2035, which found that a national clean energy standard would be pivotal to success.

In the waning days of 2020, Congress pulled out a surprise bipartisan energy policy win, passing a spending and stimulus bill that extended clean energy tax credits and earmarked billions of dollars for advanced energy technology research. That playbook could repeat itself in the coming weeks, said Jake Levine, a climate and clean energy specialist at law firm Covington & Burling.

“There’s going to be economic stimulus and possibly infrastructure bills in Congress. We just know that that’s coming,” said Levine, who worked on emissions reduction policy in President Obama’s White House Office of Energy and Climate Change. “To the extent that you can either put [climate] policy or actual spending mechanisms into these pieces of legislation, that’s going to be a key strategy. There’s plenty of precedent for doing that from the last recession.”

Indeed, U.S. Senator Bernie Sanders intends to use budget reconciliation for major stimulus legislation, the Vermont independent wrote in an opinion piece last week. His list of desired actions says that “we can create millions more jobs by making massive investments in wind, solar, geothermal, electric vehicles, weatherization and energy storage.” Notably, however, he does not say that he intends to include a 100 percent clean electricity standard in this bill.

Congress typically deals with one reconciliation bill per year. It’s entirely possible that the economic recovery from COVID-19 takes center stage in the coming weeks. and longer-term structural change to the energy system comes later.

“They are serious about it,” Levine said of the Biden administration’s clean energy standard. But, he added, “There’s a question of sequencing.”

There’s also a question of what gets lost in the attempt to fit an energy standard into the confines of the reconciliation rules, as enforced by the Senate Parliamentarian.

“It is possible to levy a fee or tax and do some spending to try to make everyone whole,” said Shane Skelton, a Republican clean-energy advocate who dealt with budget reconciliation as a policy advisor to then-House Speaker Paul Ryan. But, he added, “I’m skeptical that a bill that could get through reconciliation could account for all the things it needs to account for.”

Skelton, who supports passing a clean energy standard, worried that a reconciliation strategy would result in “a fee untethered to more comprehensive policy.” Ideally, he said, Congress would pass legislation that recognizes nuances like the different spending abilities of small municipal utilities or rural cooperatives compared to large, investor-owned ones. And it should ensure the benefits of clean energy reach minority and low-income communities. But delving into such details can lead beyond the scope of fiscal policy.

Passing that sort of comprehensive energy legislation, though, would require Senate Democrats to eliminate the filibuster or win over 10 Republicans. Either of those options would amount to a striking break from precedent.

Stokes maintains that it is possible to design an energy standard for budget reconciliation with equity in mind by targeting federal funds accordingly.

Recent events have provided new leverage for passing a clean energy overhaul. The Georgia Senate wins put reconciliation in play, and a pre-Inauguration decision by the D.C. Circuit Court of Appeals voided the Trump administration’s attempt at power plant regulation. That clears the slate for Biden to propose something new and more aggressive, instead of running through the lengthy procedural steps to eliminate an existing rule.

“What Democrats have now is…a carrot and a stick,” said Skelton, a co-founder and partner at consultancy S2C Pacific.

The carrot would be inviting the business community to collaborate on comprehensive energy transition legislation, and maybe even persuade Senate Republicans to go along with it. Failing that, the stick would be using “every regulatory lever” to pursue a clean energy agenda.

The carrot approach may be bolstered by the profound realignments in the electricity and automotive industries since the Obama-era attempt at major climate legislation. Coal plants are on their way out, and renewables already dominate new power-plant construction. Electric vehicles still make up just a sliver of total automotive sales, but automakers are expanding offerings, while utilities prepare to deliver electricity to fuel them. Major energy consumers are already flocking to corporate clean energy contracts to power their operations.

That’s a marked shift from the days when utilities rallied to protect their coal plants from climate regulations, or when automakers allied with oil companies in matters of fuel economy.

“There will be some surprising levels of willingness from industry to advocate for what would previously have been viewed as pretty progressive policy a decade ago,” Levine said.

Almost all major utilities have already pledged to eliminate their carbon emissions. Federal action could well give them money to do what they have already decided to do.

“What a lot of people will say is, ‘We’re all for this; we just have to make sure it’s done right,'” said Skelton. “If utilities really put their lobbying muscle into a clean energy standard…I believe there is a very real chance for progress.”