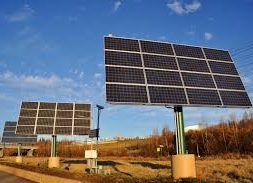 Congressional leaders have reached a deal preserving a $12 billion source of financing for U.S. wind and solar developers.

A provision included in the sweeping overhaul released Friday evening would preserve most of the value of renewable energy tax credits that developers use to raise investments from JPMorgan Chase & Co., Bank of America Corp. and other large financial companies.

The incentives had been threatened by a minimum tax on foreign transactions that was included in the bill initially passed by the Senate, limiting the amount companies could write off. The final version lets companies offset as much as 80 percent of their foreign transaction tax with renewable energy credits.

“People concerned about those credits will be happy,” Republican Senator Rob Portman of Ohio said in an interview Friday. “It’s a high enough percentage to keep the credits, but not too high to have people pay zero taxes.”

This arrangement, known as tax equity financing, is a critical funding source for clean energy. The two biggest U.S. solar companies, First Solar Inc. and SunPower Corp., are trying to close on project financing by the end of the year from large financial companies interested in using tax credits from the proposed solar farms, said Jeffrey Osborne, an analyst at Cowen & Co. Without the 11th-hour compromise, the minimum tax on foreign transactions — called the Base Erosion Anti-Abuse Tax, or BEAT — would make that harder.

Final Version
Any deal allowing wind and solar credits to offset upward of 80 percent of the minimum foreign transactions tax would preserve clean energy credits as a financing tool, Liam Donovan, a tax lobbyist at Bracewell LLP, said in an email before the final text of the bill was released.

“That would have to be considered a win,” Donovan said.

Major financial companies told groups including the American Council on Renewable Energy that they would no longer participate in tax-equity financing if the measure from the Senate bill had been adopted without being amended, Greg Wetstone, the Washington-based group’s president, said in an email.

The jobs created by wind and solar in recent years played a key role in the compromise, said Senator Cory Gardner, a Colorado Republican.

“There are tens of thousands of jobs on the line,” Gardner said Thursday. “If we get it right, it will continue to add to that opportunity to grow jobs in renewable energy and beyond — and if not it will do harm to an industry that’s just now really hitting its stride.”