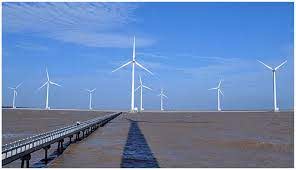 Even as the pandemic continues to drive down consumer spending and depress oil prices, investors are spending big on clean-tech companies. Shares are now at or near record highs, the latest sign that wind and solar are no longer fringe bets.

Electric-carmaker Tesla Inc. has grabbed much of the attention with a 251% jump this year. But the stock surge is hitting across clean tech, from solar installers to fuel-cell providers to wind companies. Vivint Solar Inc. has tripled, and Sunrun Inc. nearly tripled. SolarEdge Technologies Inc. soared as much as 21% Tuesday to a record high. And the WilderHill New Energy Global Innovation Index of 87 companies has soared 31% this year, eclipsing the Nasdaq’s 21% gain–and hitting highs last seen 12 years ago.

It’s a remarkable swing from the last big economic slump, in 2008, when investors fled a renewables industry that was then almost completely reliant on government subsidies—and viewed by many as science experiments. Now, solar and wind are cheap and established and desired by utilities and alike. Trillions of public and private dollars are expected to be poured into clean-energy projects over the next decade. And while some green sectors are still burdened with an up-and-down history, even energy investors burned by the oil rout are looking at clean tech. Gas and oil stocks are down some 40% this year. 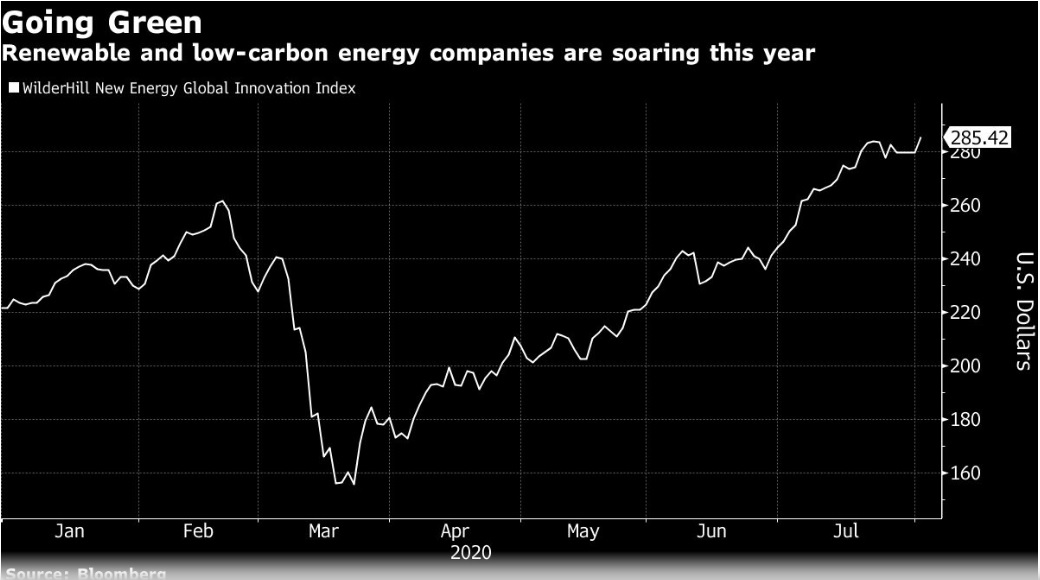 The roots of the green rally go back to late last year. Rooftop solar was looking hot, thanks to an imminent California rule requiring most new homes to be powered by the sun. Shareholders and environmental activists, meanwhile, were increasingly pressuring investors to search for do-good companies, those that score high in measures rating their environmental, social and governance policies, or ESG. In January, BlackRock Inc., the world’s largest asset manager, to focus more on climate change.

Then the coronavirus hit, oil prices collapsed and stocks fell across the board. Yet unlike a decade ago, renewables shares bounced back in an almost V-shaped recovery after it became clear that demand for wind and solar wasn’t fundamentally weakened by the pandemic. The industry’s resilience in the face of the national shutdown was “pretty extraordinary,” said Jeffrey Eckel, chief executive officer of Hannon Armstrong Sustainable Infrastructure Capital Inc., which invests in climate change solutions.

Investors have also been enticed by the potential of massive government spending and tax breaks for green projects to stimulate the economy. After Joe Biden, the presumptive Democratic nominee for president, unveiled a staggering four-year, climate-change proposal last month, interest in clean energy “kind of exploded in the first 48 hours,” said Osborne. “The plan literally had almost everything under the sun,” he added. A week later, leaders in Europe passed a recovery package that included more than $550 billion for green projects.

The U.S. last year consumed more energy from renewable sources than from coal—the first time that’s been the case since the late 1800s. More than 51,000 megawatts of new wind and solar power in the country are likely to be added by April 2023, outpacing natural gas, oil and coal-fired generation, according to an estimate by the U.S. Federal Energy Regulatory Commission. Solar and onshore wind power are now the cheapest new sources of electricity for at least two-thirds of the world’s population. And that comes without government subsidies in while incentives are declining in the U.S.

Goldman Sachs Group Inc. projects that spending on renewable power will overtake that of oil and gas drilling next year for the first time. The investment bank sees as much as of clean-­energy opportunities through 2030. Among the reasons: Borrowing rates have risen to as high as 20% for hydrocarbon projects compared with as little as 3% for clean energy.

Renewables are “a legitimate energy play that’s riding on the back of positive economics,” said Michael Weinstein, an analyst at Credit Suisse Group AG. The industry, of course, hasn’t totally shed its boom-and-bust reputation. Some investors are still licking their wounds from collapses as recent as 2016, some brought about by overly aggressive growth and financial problems. “People are still fearful of profitless prosperity,” Osborne said. And now, after Biden’s ambitious plan has been digested, “a dose of realism” has set in.

Even today, “the word ‘solar’ sets alarm bells off for a lot of people,” said Till Bechtolsheimer, co-founder of New York-based Arosa Capital Management LP. “It’s not until you spend time in the space that you start to understand that it’s not in danger of going away.”

Arosa Capital started in 2013 focused on oil and gas plays, but has been investing in clean energy each year since 2017. Its holdings now include oil giants such as ConocoPhillips as well as climate investor Hannon Armstrong. Another holding is Sunrun, America’s largest residential-solar company. Its stock surge this year was hyper-charged after it rival Vivint.

Sunrun has had dozens of conversations this year with people looking to learn more about renewables, according to Patrick Jobin, senior vice president of finance and investor relations. “The larger the sector becomes,” he said, “the more investors have to look at us.”

tags: Clean-Tech Stocks
0
previous Mukesh Ambani preps up for a multi-billion dollar play in renewables
next Change-in-law Payments Would Be a Rs4,000 Crore Booster for Solar Sector: Report