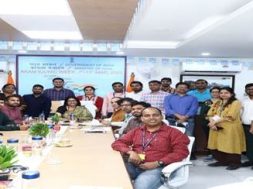 To celebrate and commemorate the 75 years of Independence and as India enters into the Amrit Kaal, Ministry of Coal is organizing special events and programmes throughout the country from 7th to 11th March, 2022, as part of the “Azadi Ka Amrit Mahotsav” Iconic Week celebrations.

The celebrations of the Iconic Week in the Ministry entered its fourth day today with the theme of Achievements@75. A talk on “Evolution of Rural Electrification Process in India: A Historical Perspective” was given by Prof Atul Kumar, JNU in the presence of Senior officers of the Ministry of Coal and CPSUs through virtual mode.

A Poem recitation contest on the theme Achievements@75 was organized in the Ministry. Officials of the Ministry participated in large numbers in the event.

A second phase of Blood Donation Camp was organised by the Ministry and large number of employees have donated blood like on the day of the inaugural function of AKAM Iconic Week celebrations.

AKAM Iconic week will continue till 11th March 2022 with a series of events and activities planned for the week.

Government of India is celebrating 75 years of Indian Independence “Azadi Ka Amrit Mahotsav” to mark 75 years of progressive India and its elegant history. The official journey of AKAM commenced on 12th March, 2021 which kick-started a 75-week countdown to our 75th anniversary of independence and will end on 15th August 2023.