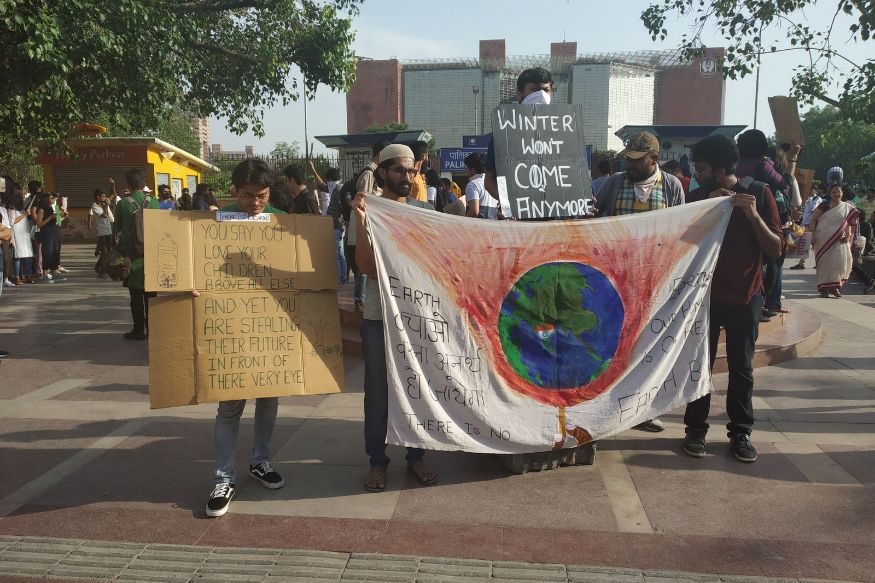 Delhi Students, Inspired by Greta Thunberg, are Stepping up to Protest Against Climate Change 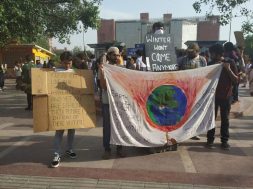 Delhi Students, Inspired by Greta Thunberg, are Stepping up to Protest Against Climate Change

The Delhi Climate Strike was a peculiar one; it was a silent protest, with most of the students wearing masks around their mouths or circling trees while holding posters.

On May 24, organisations gathered at Connaught Place, near metro Gate 6, to raise their voices and shed light on the urgent need to address climate change. Protesters emphasized on the need to enact laws, specifically to declare a climate emergency in the country which would compel authorities to take swift action. The protest started around four thirty as people arrived at the meeting point. The organisers also came armed with posters to help spread the word.

This was part of a combined effort by students to garner maximum coverage and to ensure that the message had its intended effect. These students were voicing their concerns in solidarity with Greta Thunberg, the Swedish teenager who grabbed eyeballs when she spoke up about this issue and has now been nominated for the Nobel peace prize.

The climate strike, held right after the Lok Sabha election results were declared, was organised by “ThereIsNoEarthB”, a Delhi based organisation which aims at reducing plastic consumption in the capital to a minimum. Another organisation, “FridaysForFuture”, also extended their support for the noble mission.

The Delhi Climate Strike was a peculiar one; it was a silent protest, with most of the students wearing masks around their mouths or circling trees while holding posters.

The protest was in stark contrast to the loud celebrations that followed PM Modi’s win in the 2019 elections.

Nevertheless, the newly elected government has taken this into account and has talked about climate change with the promise of a ‘Green Bonus’ to be given to different states for forest conservation. It has also promised that measures will be taken to reduce dependence on fossil fuels and promote usage of renewable energy instead.

But it must be noted that ahead of the elections, the government cleared around 10 proposals regarding a highway project, namely “Bharatmala Pariyojana”, which aims to clear around 1.18 lakh trees, 461 water bodies (including 32 rivers), and seven protected wildlife habitats. Thus, it can safely be said that manifestos aren’t enough for these youngsters who want tangible, comprehensive plans.

“It is the responsibility of everyone to be caring about the environment, I am 63 years old, and I carry my garbage picking stick everywhere with me to pick up trash if I ever see one, and also help around with cleaning ponds and planting seeds in various gardens to help out, this climate strike is very important, and it is great that so many young people have joined in,” said Rakesh Bhalla, one of the protesters gathered there. Bhalla has taken numerous proactive measures by registering complaints and highlighting shortcomings to the municipal authorities.

There was also a children advocacy group at the protest; their campaign was called “NINEISMINE” and had been started by PRATYeK organisation. This particular group is of the opinion that children should play a crucial role in impacting change and formulating laws, just like adults. In other words, the concerns raised by them matter as much. Children, belonging to various age groups, took part in the protest and asserted that it was their future that was at stake.

This group follows the ideology of Thunberg, who fuelled the original movement.

“We believe that children’s advocacy is important, as children are the leaders of today so we want to help them get a voice in this conversation,” said one of the volunteers who accompanied the group for the strike. The same group is again taking part in another climate strike on 4th of June at Jantar Mantar.

The climate strike ended around six thirty with the organisers coming together and shouting slogans like “There is no Earth B” and “We want climate action now”.

The organisers are planning to hold a similar strike every Friday so as to throw light on the urgency of the situation. They are hopeful that their mission and efforts won’t go unnoticed and that immediate action will be taken.