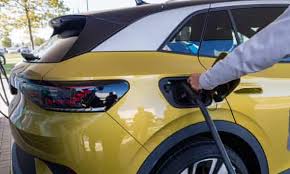 ‘Disastrous’ or a smart move? How Victoria’s case for an electric car usage tax stacks up

‘Disastrous’ or a smart move? How Victoria’s case for an electric car usage tax stacks up

As Australia lags in the global take-up of electric vehicles, there are concerns the proposed tax would raise prices and put off potential buyers

The Victorian government has proposed a new road usage tax for electric vehicles, mirroring moves in South Australia that some critics are saying could dissuade prospective buyers.

The tax would look to charge motorists 2.5c a kilometre for electric vehicles, while a 2c/km charge would be applied to plug-in hybrid vehicles.

Victoria’s treasurer, Tim Pallas, announced the new charges as part of the lead-up to the release of the state budget, saying he hoped the tax would create a “fairer system” for taxing road users.

But some critics have said the new tax flies in the face of the global movement towards zero emissions, and would potentially discourage people from taking up the new technology.

The Electric Vehicle Council’s chief executive, Behyad Jafari, told the Guardian the decision was “disastrous” and the government needed to rethink its approach.

“Australia is going to become the first country in the world to discourage people from buying electric vehicles by adding a new tax on to them.”

So, what are the arguments against this tax, and how do they stack up? We break it down for you.

Why do people think it’s a bad idea?
Simon Holmes à Court, a senior adviser to the Climate and Energy College at Melbourne University, said that although transport reforms were inevitable, this particular reform and its timing was a “terrible idea”.

“Australia is lagging behind the rest of the world with the electric vehicle transition.”

Electric vehicles have only 0.6% market share in Australia, according to the Global EV Outlook, compared with 2.6% globally and 4.9% in China.

Potential customers currently need to pay a luxury tax, a stamp duty and GST. Unlike in some countries, such as the US, there are no subsidies for electric vehicles in Australia.

“We already have a significant tax take on electric vehicles that we don’t see in other countries, which goes a long way to explaining why Australian uptake is so far behind the rest of the world.

With the addition of a usage tax, Holmes à Court said electric vehicles would become more expensive in Victoria.

“A lot of people are holding out until they can afford it, and by putting this extra tax on top Victoria has just kicked it further into the future.”

Do fuel excises really pay for our roads?
Pallas said in presenting the tax that the money made would be invested in improving roads. But some experts doubted that the tax would, whether directly or implicitly, go towards fixing roads.

“If fuel excise funded roads, we’d be driving on gold plated roads by now,” said Holmes à Court, explaining that fuel excise had not directly gone into roads since 1959.

He said it was a tax like any other tax, such as wine excise or income tax, and that there was no specific connection between fuel excise taxes and investment in roads.

“It’s a myth,” Jafari said, pointing out that it was not the state government that collects fuel excise taxes.

“Fuel excise is recovered by the federal government, and you have the state government saying it wants to tax this, so they’re not making up for lost tax revenue today. It’s more of a tax grab by them.”

Is this a tax for the future?

Uptake is fairly low right now, but many believe that electric vehicles will eventually make up a majority of cars on the road. With a road usage tax already in place, the state government will then be well placed to take advantage.

“This is about introducing a tax now, when there is almost no constituency,” Holmes à Court said.

From a budgetary perspective, he conceded the tax made some sense, but said there were more challenges from an environmental perspective.

“If you’re a treasurer, this is a smart move. If you’re an environment minister, this is dumb. You are slowing down the transition to electric vehicles by putting them out of reach of more Australians.”

The government anticipates that the tax will bring in $30ma year. However, Holmes à Court believes the tax could bring in “a couple of billion a year” by the 2030s.

Introducing the tax then could prove more difficult than doing so now, according to Jafari, who said that to some degree, the government was motivated to introduce it because they do not anticipate much pushback.

Isn’t this about fairness? Shouldn’t everyone pay their fair share?

A report by Ernst and Young released earlier this year found the opposite. The report said electric vehicles each provided a net benefit of $8,763 to the economy over a 10-year life span, and that they directly contributed more to government revenue that petrol or diesel-based vehicles.

So, in a sense, advocates argue that owners of electric vehicles are already pulling their tax weight, without the introduction of a usage charge.

Marion Terrill, the transport and cities program director at the Grattan Institute, said the call for fairness had more weight than other arguments, but people still needed to consider the environmental impact of the vehicles.

“This argument needs to have injected into it is a consideration that you’re contributing to lower emissions than would have otherwise been the case.”

Terrill also said the issue with the tax was less about focusing on the wealthy and more about how the tax would affect those on the margins and in two minds about purchasing an electric vehicle.

“I think price increases will affect people at the margin, people thinking ‘Oh, will I or won’t I?’ A price increase is likely to affect their decision.”

The impact on uptake was a point Jafari returned to often, saying that adding more charges onto electric vehicles would put people off from making the switch.

“This actually has a harmful impact on equity. If you want to make something accessible to people, you make it cheaper not more expensive.”

What about an alternative?
Terrill and the Grattan Institute suggested an alternative tax should instead look at congestion, arguing that if the goal was to address costs and emissions, a tax on electric cars would miss the mark.

“What I find disappointing about this proposal is that it doesn’t address congestion … which we know to be a very significant cost on the community – there’s a significant productivity opportunity there.

“It would allow you to delay building new infrastructure because it helps to spread out usage across the day, and it would encourage people who can be flexible about when they travel or how they travel to do so.”

Other ideas, such as taxing vehicles based on weight (and potential damage done to roads) or a tax based on distance travelled, have been tossed up.

But Jafari argues that because such taxes are far more wide reaching, they’d be far more difficult to sell to the public.

“The government has just decided it’s too difficult for them, because it’s always difficult to explain new taxes,” he said. “The only reason they’re pursuing electric vehicle taxes is because so few people are driving electric cars.”