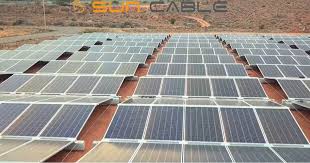 Country Liberal Senator for the Northern Territory Dr. Sam McMahon appears to have channelled Senator Matt Canavan in a reaction to the potential location of a massive solar and storage project- the Australia-ASEAN Power Link (AAPL).

Sun Cable is proposing to build a $20 billion 10GW solar plant across thousands of hectares in the Northern Territory along with 20-30 gigawatt hours of energy storage. Consisting of millions of solar panels deployed using Australian company 5B’s Maverick system, the facility will export a large proportion of the clean electricity it generates to Singapore via a submarine cable.

Last week it was revealed preferred sites for the project are located within Newcastle Waters group of Northern Territory cattle stations.

Senator McMahon may want to look at some satellite imagery. For example, Newcastle Waters station is huge (1 million hectares+) and Sun Cable’s AAPL would occupy around 1.2% of it. Imagery of the potential sites published on RenewEconomy indicate they are not what you’d call prime agricultural land and even “productive” could be a bit of a stretch.

On non-recyclable panels – most of a solar panel can be recycled. SQ’s Ronald has previously commented though that at this point in time, it’s just not financially worth it to recycle some of a module’s components. But these panels will be operating for decades and a lot can change in that time. For all we know, there may be a condition or commitment that regardless of whether there is a profit to be made from it, the solar panels will be partly or fully recycled.

On being a “totally hostile” area – solar farms have been successfully and profitably operating for years in various less than ideal conditions in many parts of the world – from Chile to Africa, to China, to … Australia.

As for the extension cord bit, that’s a cute way to put it. A High Voltage Direct Current (HVDC) submarine cable is some serious hardware.

According to Sun Cable, the AAPL will not only export approximately $2 billion of solar energy per year to Singapore, it will be able to supply a significant amount of renewable energy to the Territory. There’s a lot to like about the project – and it’s certainly making people sit up and take notice of the potential of solar power.

Footnotes
In case you’re curious about the “Dr.” title, Sam McMahon completed a Bachelor of Veterinary Science at the University of Queensland and spent 30 years owning and running veterinary practices across the Territory