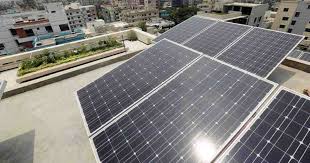 Emphasising the need for an integrated initiative for promotion of renewable energy, experts have said that some 2,000 MW of solar power could be easily generated across the country on the rooftops of some 5,000 government buildings.

“If there is a policy declaration that the rooftops of all the government buildings should be used for solar power generation and Bangladesh Power Development Board (BPDB) will buy the same, private sponsors will be immensely interested in investing in such projects,” Munawar Misbah Moin, President of Solar Module Manufacturers Association of Bangladesh (SMMAB), said at a webinar on Saturday.

The state-owned Infrastructure Development Company Limited (IDCOL), he said, should come up as a lead investment partner to form a consortium with other commercial banks for financing such projects.

Welcoming the interest of the private sector in rooftop solar power projects, Prime Minister’s Energy Advisor Dr Tawfiq-e-Elahi Chowdhury said there are good prospects of solar and other renewable energy sources as storage systems have been coming up in a big way with the invention of new technologies.

“May be in the coming future, there will be no need for a grid system and solar power will be the mainstream energy,” he said at the webinar, organised by the Energy and Power magazine.

IDCOL’s Head of Renewable Energy Enamul Karim Pavel made a presentation on “Rooftop Solar Future in Bangladesh”, saying that there are over 5,000 government buildings having huge potentials of generating rooftop solar power.

Dr Tawfiq-Elahi said that solar energy could be a major source for recharging e-bikes, which now play a major role in rural transportation. “The private investors can set up recharge stations for battery-run easy bikes.”

Another speaker, Mohammad Alauddin, the Additional Secretary of Power Division and Chairman of Sustainable and Renewable Energy Development Authority (Sreda), said that the authority has plans to set up a National Solar Help Desk to provide information and other services to investors and consumers.

SM Monirul Islam, Deputy CEO of IDCOL, said that IDCOL has been extending its financial support to the private sector. “Climate green funds could be a low cost financing instrument to promote the solar energy projects,” he said, suggesting the need for a state-guaranteed mechanism for consortium loans between IDCOL and other private banks.

Prime Bank Chairman and East Coast Group managing director Tanjil Chowdhury, who also attended the webinar, said private investors in rooftop solar power plants should be given the same benefits “now being given to the independent power producers (IPP)”.

Private player Solar International Ltd’s MD Didar Islam, another speaker, said that Bangladesh is going to have the single largest rooftop solar power plant of 40 MW, “which is being set up at the Korean Economic Zone”.

Enamul Karim Pavel, on his part, said that with reducing cost of solar panels and other equipment, “now per unit of rooftop solar power could be generated within Tk 5.27 while residential consumers have to buy each unit of electricity over Tk 6.30”.

Others who spoke at the webinar included Director of Institute of Energy of Dhaka University Prof Saiful Haque, and Coordinator of Renewable Energy and Energy Efficiency Programme of GIZ Al Modabbir Bin Anam. The webinar was moderated by Energy and Power magazine editor Mollah Amzad Hossain.