Draft report for UN: India set to meet 2 of its 3 Paris Agreement goals

Draft report for UN: India set to meet 2 of its 3 Paris Agreement goals

The country has had a slow start to one component, the Green India Mission

India is well on the trajectory to achieve two of its three commitments under the Paris Agreement ahead of the 2030 deadline, the government is set to inform the global community by December. This assessment forms part of a report that India will submit to the UN Framework Convention on Climate Change this year.

The report, called the Second Biennial Update Report, enumerates India’s latest emission data and also what kind of threats the country is already facing from climate change. Business Standard reviewed a draft of the report prepared by the Union environment, forests and climate change ministry. The draft will go through a round of inter-ministerial consultations before it is finalised.

Under the Paris Agreement, India has made three commitments. India’s greenhouse gas emission intensity of its GDP will be reduced by 33-35 per cent below 2005 levels by 2030. Alongside, 40 per cent of India’s power capacity would be based on non-fossil fuel sources. At the same time, India will create an additional ‘carbon sink’ of 2.5 to 3 billion tonnes of Co2 equivalent through additional forest and tree cover by 2030.

The report indicates that India is well on way to achieve the target for emission intensity of the economy and share of non-fossil fuel-based power capacity. In fact, at current rates of improvement on both fronts, India could achieve these targets ahead of the 2030 deadline. But the country has so far not been able to make a smooth start towards the target for increasing India’s forest cover in order to create an additional carbon sink. 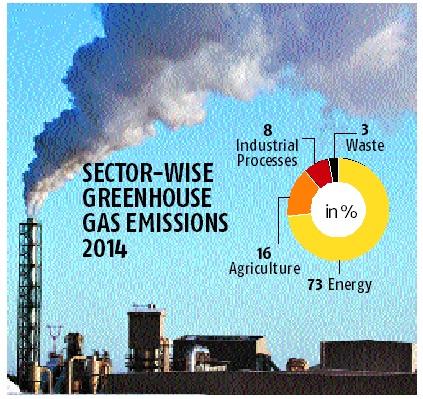 The report, besides other information, includes how much greenhouse gas emissions India emitted in 2014 and what the growth was relative to 2005 and 2010 levels. Even at this recorded rate, India could reach its Paris Agreement commitment ahead of the 2030 deadline.

The report also looks at the second target — turning 40 per cent of the power capacity in the country to non-fossil fuel sources by 2030. By March 2018, the report notes, citing Central Electricity Authority India had ensured 35 per cent of its capacity is based on non-fossil fuel base such as renewables, hydroelectricity and nuclear. Another 17-23 GW of non-fossil fuel capacity addition could take India to the target well before 2030.

“After that, the sheer economics will ensure the greening of India’s power sources. We must remember, India did not commit internationally to the renewable energy capacity target. India said, 40 per cent of its capacity would be from non-fossil fuel sources, which includes large hydropower as well as nuclear power,” explained an official.

“Solar prices have come far too low perhaps and will stabilise at a slightly higher benchmark for the investments in the sector to be remunerative, but we are well on our way to the transition now as far as the international targets are concerned,” he added.

The Indian story sours when the report turns to India’s Green India mission. Under the mission, the government is to ensure an additional ‘carbon sink’ of 2.5 to 3 billion tonnes of Co2 equivalent by greening India’s forests and enhancing the tree cover beyond the forest areas by 2030. On this front, India is receding further from its target rather than improving.

Data from India’s draft Biennial Update Report shows that the carbon sequestration from forests has actually got worse between 2010-2014. Carbon removed from the atmosphere by forests is included in the emissions inventory as part of a broader category called, “Land use, land-use change, and forestry.” or LULUCF. The draft report pegs the 2014 levels of emission removal by forestry at only 68,215 gigatonnes of Carbon dioxide equivalent as compared to the 200,036 gigatonnes of carbon dioxide equivalent in 2010.

But the removal of greenhouse gas emissions from the sub-category ‘croplands’ more than doubled over the same period. This sub-category includes emission removal from agro-forestry and tree cover outside forests. Emissions from croplands were pegged at 248,610 gigatonnes as compared to 110,757 gigatonnes in 2010.

“At the moment India’s Green India Mission is lagging behind, yes,” said another official, wishing to remain anonymous, said. “We would have to think hard on how to get this off ground. We have time but forestry, community rights, growing plantations – all these have deep contested histories in India. We also have a great opportunity going ahead to increase agro-forestry in India,” he added.