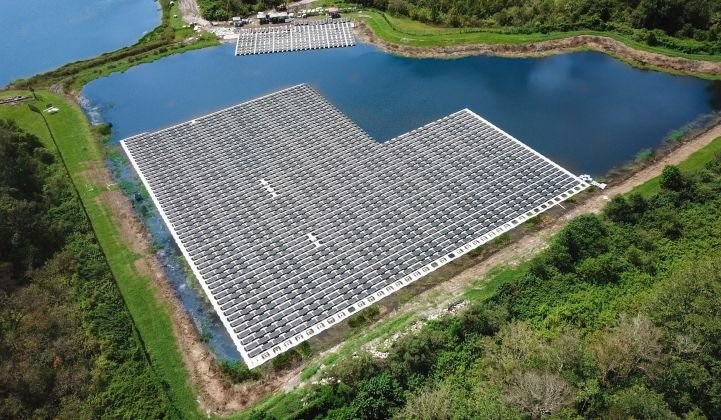 Duke Energy will build its first floating solar array at Fort Bragg, a U.S. Army base in North Carolina.

Duke Energy will build its first floating solar array at Fort Bragg, a U.S. Army base in North Carolina, the company said on Wednesday. It’s the largest such project ever announced in the Southeast, according to Wood Mackenzie.

The $36 million contract between Duke and Fort Bragg is designed to boost resilience and includes lighting and water upgrades, plus a 2 megawatt storage system tacked onto the solar project. Ameresco, a Massachusetts-based renewables developer and energy efficiency company, will build the project on a lake at the base. Fort Bragg will take over ownership when the project is finished.

At 1.1 MW, the Duke project is no record by average solar standards. The biggest U.S. solar plants rank above 600 MW. But the project is a notable addition to the nation’s tiny but burgeoning floating solar market.

The average size of floating PV (FPV) installations in the U.S. is 1.5 MW, per WoodMac’s tracking. The country’s largest project, a 4.4 MW installation in New Jersey, went in just last year. The country has thus far installed only about 9 MW of FPV, making the Fort Bragg installation “quite substantial,” said WoodMac solar analyst Molly Cox.

Globally, floating PV is just a small fraction of the overall solar market: less than 2 gigawatts of the near 600 GW now installed worldwide. The technology is most widely used in Asia, where land constraints make it an enticing option. Eighty-seven percent of 2019 installations were located in that region.

“The U.S. doesn’t necessarily face the same demand drivers as other FPV markets in Asia, [but] there is growing interest for FPV within the country,” said Cox in an email.

Assessing FPV’s potential
In theory, floating solar has a variety of “co-benefits” aside from pure, renewable power production.

The cooling effect water has on panels can increase solar performance, while solar panels can shade parts of water bodies like reservoirs and reduce evaporation. The construction of a project requires lower land acquisition costs and means less shading on modules.

A 2018 study published by researchers at the National Renewable Energy Laboratory found that FPV could generate about 10 percent of total U.S. electricity if installations were plopped on just over a quarter of the country’s existing human-made water bodies where FPV is feasible.

Under existing estimates of FPV potential, the entire world could install up to 1,000 GW. That potential is even greater when FPV systems are paired with hydropower, reaching 4,400 to 5,700 GW.

NREL’s most recent study is “really optimistic,” because it doesn’t account for economics or market feasibility, said Nathan Lee, a researcher at the lab and the lead author on the study. But the new analysis shows an “upper-bound estimate” of FPV’s worldwide potential based on available bodies of water and expected performance of FPV assets.