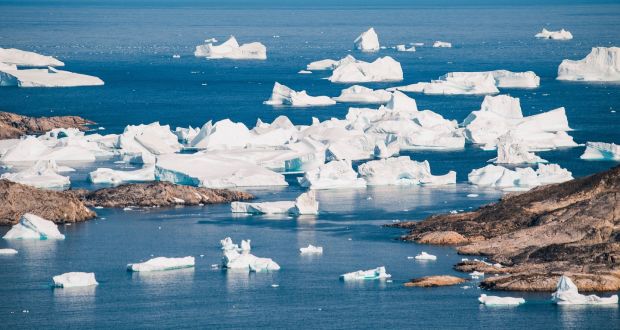 Impacts of global warming are alarming and often irreversible. More than anything else, the unprecedented melting of ice sheets and glaciers is a defining outcome of this global crisis. Left unchecked, the resultant rise in sea levels can submerge the coastal parts of the planet due to the accelerated melting, which, so far, is in line with the worst-case climate warming scenarios projected by the climate scientists.

Now, a fresh study has sent the alarm bell ringing by revealing that the world lost a whopping 28 trillion tonnes of ice between 1994 and 2017. This amount is said to be equivalent to a 100 metres thick ice sheet covering the whole of the United Kingdom. The study, a first-of-its-kind, carried out an overall survey of global ice loss with the help of satellite data.

In the study, researchers warn that the rate of ice loss is speeding up across the planet, especially over the past three decades. The ice loss was recorded at 0.8 trillion tonnes per year in the 1990s, while it increased to a whopping 1.3 trillion tonnes by 2017. To put things into perspective, one trillion tonnes of ice is equivalent to a cube of ice measuring 10x10x10 km (width, height and depth)—larger than Mount Everest.

The data comparison of the past 23 years estimates that there has been a 65% increase in the rate of ice loss with notable changes seen from regions like Antarctica and Greenland.

Thomas Slater, the lead author of the study said: “Although every region we studied lost ice, losses from the Antarctic and Greenland ice sheets have accelerated the most. The ice sheets are now following the worst-case climate warming scenarios set out by the Intergovernmental Panel on Climate Change. Sea-level rise on this scale will have very serious impacts on coastal communities this century.”

Warming world
The official statement from ESA says that this drastic increase in the ice loss is mainly due to the heating up of the atmosphere and oceans. Since 1980, both atmosphere and ocean have marked rise in temperatures by 0.26°C and 0.12°C per decade, respectively.

Altogether, the loss is estimated to have raised the global sea levels by 35 millimetres. Even a centimetre of sea-level rise can impact the millions of people living in the low-lying regions of the world. Moreover, it can also have severe consequences for the economy and the environment.

Apart from the sea-level rise, the melting of ice has direct implications on Earth as well as it enhances the solar radiation absorption. Explaining the impact of sea-ice loss, another researcher, Isobel Lawrence, Centre for Polar Observation and Modelling said, “One of the key roles of Arctic sea ice is to reflect solar radiation into space, which helps keep the Arctic cool. As the sea ice shrinks, more solar energy is being absorbed by the oceans and atmosphere, causing the Arctic to warm faster than anywhere else on the planet.”

The study was led by the team of scientists from the University of Leeds, U.K.The researchers examined about 215,000 mountain glaciers of the planet, along with the polar ice sheets of Greenland and Antarctica, the ice shelves of Antarctica, and drifting sea ice of Arctic and Southern Oceans. The data was collected using European Space Agency satellites, which includes ERS, Envisat, CryoSat satellites and the Copernicus Sentinel-1 and Sentinel-2 missions.