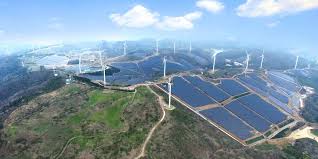 In July, as Electrek reported, South Korea announced a plan to spend $95 billion to help its economy recover from the pandemic and create jobs. The plan set a goal of net zero by 2050, an end to funding of overseas coal plants, and the introduction of a carbon tax.

Today, South Korea’s president Moon Jae-in announced that Asia’s fourth-largest economy is formally committing to reach net zero by 2050. The green energy transition plan momentum in East Asia in the last two months has been rapid: South Korea follows Japan, who made its own net zero by 2050 pledge earlier this month, and China, who committed to net zero by 2060 at the end of September.

In a speech to the National Assembly, Moon said:

The government has pushed for strong policy to shift energy [sources] so far, but we still need to improve many things. We will go toward carbon neutral by 2050, taking action on climate change.

We will replace coal power with renewable energy, creating new markets and industries as well as jobs.

Australia has responded to the momentum of its neighbors with a refusal to set emissions targets. China, Japan, the UK, and South Korea account for more than AUD $310 billion (US $218 billion) in Australian annual trade — and they all now have net zero targets. Yet coal and natural gas alone are worth more than 25% (AUD $110 billion, or US $77 billion) of Australia’s exports.

One would think that would be a serious concern for the Australian government — but nope. The Sydney Morning Herald reports:

Prime Minister Scott Morrison says he will not be dictated to by other governments’ climate change goals, declaring he is not worried about the future of Australia’s exports despite four of the country’s top trading partners adopting net-zero emissions targets.

The Morrison government has argued it will comply with the terms of the Paris climate agreement by reaching net zero by sometime in the second half of the century but has not set a firm target.

Morrison’s response on Wednesday to Korea’s announcement and a personal plea from UK prime minister Boris Johnson to take “bold action” and set targets was:

One thing the British Prime Minister and I agree on is that achieving emissions reductions shouldn’t come at the cost of jobs in Australia or the UK.

Gas mining and exploration make up 0.2% of the Australian workforce.

Governor Ralph Northam (D-VA) signed the Virginia Clean Economy Act in April, so expect to see a lot of green energy activity in the mid-Atlantic state. The latest solar farm to be completed is in Danville, a town that sits on the North Carolina border.

Danville Utilities, in partnership with EPC energy firm CS Energy, solar independent power producer Navisun, and clean energy investment company TurningPoint Energy, has completed a 14 MW DC utility-scale solar farm. The 100-acre project is made up of two adjoining sites. It will generate an estimated 23,551 MWh annually for the community. It equates to about 3% of Danville Utilities’ yearly energy output, or enough to power 1,500 homes each year.

Jason Grey, director of utilities for the City of Danville, which has a population of around 41,000, said:

These solar farms will… contribute to the city’s current renewable power supply portfolio and help us meet our long-term goal of being completely independent of fossil-fueled generation.

Danville is a great example of green energy initiatives at the local level across the US, which are rapidly increasing.