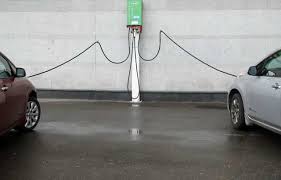 LISBON : The Columbiana County port authority held an event to launch a new electric vehicle charging station on Friday, which makes it one of two fully operational stations in the county.

In late July, the county port authority board approved entering into a contract with ChargePoint Inc., the largest network of electric vehicle charging stations in North America and Europe, based out of California.

The port authority’s contract with ChargePoint is for five years and will pay $2,160. The payment covers maintenance, credit card billing and the cloud services for the charging station. port executive director Penny Traina emphasized that the new venture has been constructed, installed and will be maintained using no taxpayer dollars.

“The port authority has made the investment in the lease, the machine, the installation and the future maintenance,” Traina said. “We have taken this on because we understand the importance of the future in the electric charging industry.”

Traina believes that showcasing the new technology is essential to the county’s economical and sustainable growth.

The company came in to install a Level 2 CT 4000 dual electric vehicle charging station, capable of charging two electric vehicles simultaneously. It is located in front of the port authority building for anyone to use, and for the first year of the station, customers will be able to charge their vehicles at no cost.

“You take something like this charging station and put the focus on the port authority and let everyone know that we are the leaders of progression,” state Sen. Michael Rulli said. “We’re going to bring capitalism and environmentalism together. But more importantly we’re going to create more jobs.”

With the city of Columbiana’s electric vehicle charging station becoming fully operational on Oct. 9, the county is starting to take advantage of the growing popularity of electric vehicles, as the Lordstown plant continues to work toward electric trucks.

Traina said that with the recent announcements from GM and LG Chem in regard to the Lordstown Ultium Cells LLC Battery Plant, the county port authority hopes to capitalize on the growth of the future of electric transportation.

“The construction of this new plant, which commenced in May 2020, will create over $2.3 billion in investments and 1,100 new local jobs,” Traina said.

There is a mobile app for electric vehicle owners where they can locate the charging stations when driving through the area.