SpaceX founder and CEO Elon Musk is on the path of launching an ambitious project of connecting the world via his satellite-based broadband internet service. The service is called Starlink.

The objective of this project is to provide low-cost internet connectivity via satellite signal in those areas which previously were low-priority locations.

To establish a service like this Musk plans to launch 40,000 satellites into orbit which will be the largest satellite internet service in the world.

Elon Musk recently tweeted out that the private testing for the service will begin in another three months while the public testing phase will start at the end of 2020. 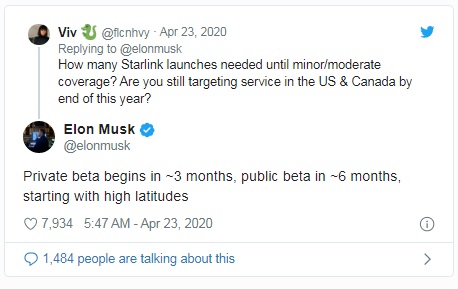 Each solar-powered Starlink satellite has been retrofitted with sensors and thrusters so it can detect its location and stay in line.

On 23 April, a SpaceX Falcon 9 rocket successfully deployed a fresh batch of 60 Starlink satellites into orbit, taking the total number of satellites launched to over 420.

“Successful deployment of 60 Starlink satellites confirmed,” SpaceX said in a tweet on Wednesday.

Called the ‘Starlink 6’ mission, this became the fifth Starlink mission this year and the company’s seventh batch of operational satellites since 2019.

The launch of the ‘Starlink 6’ mission marked the 84th flight for Falcon 9, making it the most flown US rocket in use today, according to a report in Space.com

The advantage of a technology like this is that customers won’t have to wait for a broadband line to come to their house for the internet to work. Satellite-based broadband internet eliminates the need for physical wires and reaches households directly though signals (like DTH).