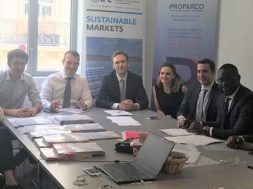 The solar photovoltaic (PV) plants are part of the Scaling Solar initiative in Senegal, conducted jointly by the Senegalese authorities and International Finance Corporation (IFC)

PARIS, France: ENGIE (www.ENGIE.com) and partners Meridiam and FONSIS have signed the EPC, Operation & Maintenance and Finance contracts for two solar PV projects of 60 MW. The total investment cost for the projects amounts to 47.5 MEUR and debt is provided by the following Development Finance Institutions; the European Investment Bank (EIB), the International Finance Corporation (IFC) and Proparco.

The solar PV plants are part of the Scaling Solar initiative in Senegal, conducted jointly by the Senegalese authorities and IFC. ENGIE was selected as preferred bidder by Senegal’s Electricity Sector Regulation Commission (CRSE) in a tender launched in October 2017.

ENGIE and Meridiam hold a 40% shareholding in the project company. FONSIS, the Senegalese sovereign fund, is a shareholder with a 20% equity stake. The projects are located in Kahone, in the Kaolack region, and in Touba-Kaël, in the Diourbel region; construction and operation of the plants will be managed and executed by ENGIE.

Yoven Moorooven, CEO of ENGIE Africa: “In an extremely competitive context, ENGIE reaffirms its commitment to be a long term player in Senegal and to bring clean and affordable energy to the country while creating sustainable jobs. These projects are perfectly in line with the strategy of the Group to become a leader in the zero carbon transition “as a service” for our customers in Africa.”

In Senegal, ENGIE is already involved in the Senergy project, a 30 MW solar photovoltaic plant in the town of Santhiou Mekhé and in Ten Merina, a 29.5 MW solar photovoltaic plant in the region of Thiès, near Dakar. Both projects are currently in operation. In 2017, ENGIE signed a partnership with ANER, Senegal’s National Renewable Energy Agency which focuses on accelerating the development of renewable energy in the country. The Group is also implementing solar energy solutions for rural households in Côte d’Ivoire and in Senegal through partnership agreement signed with L’Agence Sénégalaise d’Electrification Rurale (ASER). ENGIE through its West African operating entities, brings innovative solutions to industrial and large tertiary customers in Senegal.

Distributed by APO Group on behalf of ENGIE.

About ENGIE Africa:
ENGIE (www.ENGIE-Africa.com) is the largest independent electricity producer in the world, and one of the major players in natural gas and energy services. The Group has more than 50 years of experience on the African continent and has the unique ability to implement integrated solutions all along the energy value chain, from centralized production to off-grid solutions (Solar Home Systems, mini-grids) and energy services. With nearly 3,000 employees, 3.15 GW of power generation capacity and serving decentralized electricity to more than 2.5 million people, ENGIE offers energy solutions across the continent.

About ENGIE:
Our group is a global reference in low-carbon energy and services. In response to the urgency of climate change, our ambition is to become the world leader in the zero carbon transition “as a service” for our customers, in particular global companies and local authorities. We rely on our key activities (renewable energy, gas, services) to offer competitive turnkey solutions.

With our 160,000 employees, our customers, partners and stakeholders, we are a community of Imaginative Builders, committed every day to more harmonious progress.