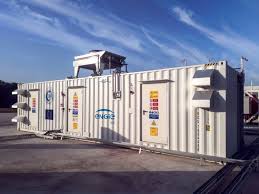 A hydrogen-based energy storage system has been completed at the Agkistro microgrid in Greece in the EU REMOTE project.

The storage based on Engie EPS’ proprietary technology consists of a hydrogen ‘power-to-power’ system made by an electrolyser, converting electricity into hydrogen (power-to-gas), and a fuel cell system, converting stored hydrogen back to electricity (gas-to-power).

The system will benefit from the continuous availability of renewable hydroelectric energy that allows to minimise the power-to-gas sizing, while covering peak load request and guaranteeing back up energy thanks to the 500kWh hydrogen storage equivalent net energy.

Commissioning and site acceptance testing have been completed successfully.

“With the finalisation of the Agkistro’s plant, our hydrogen proprietary technology is now proven in four continents as the only available option to make microgrids 100% green,” states Carlalberto Guglielminotti, CEO and General Manager of Engie EPS.

“For the future, we are also targeting utility-scale opportunities as system integrator and technology provider.”

The Agkistro microgrid is one of four demonstrations in the EU supported REMOTE (Remote area Energy supply with Multiple Options for integrated hydrogen-based Technologies) project. The four-year project started in 2018 aims to demonstrate the feasibility of hydrogen-based technologies for renewable energy storage in isolated and off-grid areas.

The Agkistro microgrid in northern Greece close to the Bulgarian border is an isolated grid application in partnership with the Greek renewable energy supplier Horizon S.A. The microgrid will supply an energy independent agri-food processing unit using part of the energy generated from Horizon’s nearby hydroelectric plant to produce hydrogen, which will then be stored and used for power generation when needed.

The other isolated microgrid demonstration in REMOTE is taking place on Froan Island in Norway and comprises a hybrid system with solar PV and wind and residential and fisheries industrial loads.

The two off-grid configurations are at Ginostra on Stromboli Island in southern Italy where Enel Green Power is demonstrating a PV, hybrid battery-hydrogen storage system and Ambornetti in northern Italy where also a hybrid system is being implemented with biomass as one of the generation resources.

The hybrid approach provides both short and long term storage options such as daily delivery from the batteries and seasonally from the hydrogen.