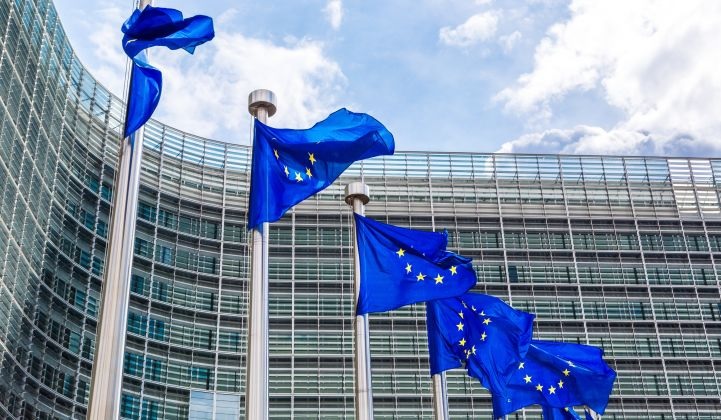 An increase from 40 percent to 55 percent emissions reduction by 2030 puts the renewables sector on notice for a ramp-up in demand.

The EU will increase its 2030 emission reduction target to “at least 55 percent” up from 40 percent, Ursula von der Leyen, president of the European Commission, confirmed Wednesday.

The change will be introduced as an amendment to the EU’s climate law. The EC is likely to have found a target that is achievable and politically palatable to all member states. While some member states were already happy with a 40 percent goal, some environmental groups wanted to move to 65 percent.

“Our impact assessment clearly shows that meeting this target would put the EU firmly on track for climate neutrality by 2050 and for meeting our Paris Agreement obligations,” said von der Leyen.

Further details were also revealed on Thursday of the €672.5 billion ($807 billion) coronavirus recovery package that contains the EU Green Deal, including the condition that 37 percent of the funds will be used to meet clean-energy objectives.

Manon Dufour, the head of the Brussels office at energy and environment think tank E3G, said the new emissions-reduction target is a substantial shift in position.

“I think 55 percent is a very positive step for Europe, and honestly, it would have been unbelievable just a year ago,” she told GTM in an interview. “It’s significant domestically but also internationally in terms of raised pledges for the Paris Agreement.”

What does it mean for renewables?

The increased target seems likely to signal an uptick in renewable energy as electrification ramps up. Dufour said it should be sufficient for investors, developers and national governments to accelerate deployment, even while work continues to distribute funding and develop new support mechanisms.

A leaked document, circulated on Wednesday, showed that the share of renewables in the electricity mix would have to rise from around 32 percent to at least 65 percent by 2030. In terms of total energy demand, renewables will have to reach 38 to 40 percent compared to the 33 percent expected under current policies. Reuters reported that an additional €350 billion of energy investment would be required from 2021 to 2030.

The exact pace of renewables growth required is now being consulted on by the commission ahead of it presenting its plan next June.

Speaking at a press conference on Thursday, energy commissioner Kadri Simson reiterated the overarching trajectory of the efforts. Oil consumption will have to fall by a third in a decade’s time, Simson said, while transportation powered by renewable sources — including electricity, biofuels and green hydrogen — will have to increase to 24 percent of the total.

“Our careful assessment shows that this is doable,” she said adding that the bloc could not “cram for this exam” at the last minute.

To get the ball rolling, a €1 billion innovation fund has opened immediately.

Fossil fuels could lose out once lawmakers thrash out the details

Specific policies to deliver the target will now be the focus for legislators, the EC and lobbyists. The commission expects to present new legislation for consideration in June 2021. That means any new support mechanisms are unlikely to be in place before 2022.

One mechanism already in development is the EU Renewable Energy Financing Mechanism, geared to allow member states to cooperate on renewable energy projects. It would allow, for example, Sweden to invest in a solar project in Greece but count the emissions reductions achieved toward its own targets.

On Thursday, the European Commission also presented member states with guidelines on how to access the €672.5 billion of grants and loans available from its recovery package. Countries must present their own proposed investments that are aligned with the fund’s policy goals. The EU will then distribute that financing. The plans have to be submitted by April next year and executed by 2026.

Simson also noted the EU’s fossil fuel subsidies of €50 billion match the amount of its renewable investments. Those subsidies require a “rethink and reset,” Simson said.

The EU developed a strict definition of what it considers to be “sustainable.” Natural gas didn’t make the cut. Depending on how strictly that taxonomy is applied to the recovery funds, natural-gas infrastructure could be excluded from the €672.5 billion of support.

“We’re not at the point where they are ‘forbidden,’ but they at least have the tools [to limit new support for gas] now after a decade of blanket statements.”