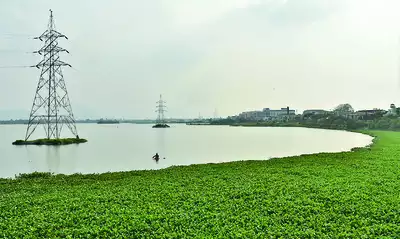 Coimbatore: The city corporation is in the process of roping in a consultant to study the feasibility of installing a floating solar power plant on Periyakulam lake.

A corporation official sai they had released terms of reference for the study and the consultant would be finalized in the second week of June.

Periyakulam, which is presently being developed under the smart city scheme, is spread over 136 hectares. The project may come up on 12 acres at the northeast corner of the lake.

The official said a pilot project would be established at the proposed site initially, with a capacity of around 100 KW. The corporation and the Swiss Agency for Development and Cooperation, which funds a project called CapaCITIES (Capacity building for low-carbon and climate resilient city development), would bankroll the project. The final capacity of the plant will depend on funds made available by the corporation.

Advantages of setting up a floating solar power plant include no requirement of land, reduced loss due to shading and less civil works. It will also help to reduce evaporation in the lake and improve water quality by reducing algal growth.

The city already has two solar power plants at Ukkadam and one at Kavundampalyam with a total capacity of 5.6MW. T

The corporation is also in the process of building another plant at Kavundampalyam with a capacity of 2MW at an estimated cost of 14.5 crore.

The official said the investment in the solar power production would not only help bring down dependency on Tangedco but also reduce carbon emission.