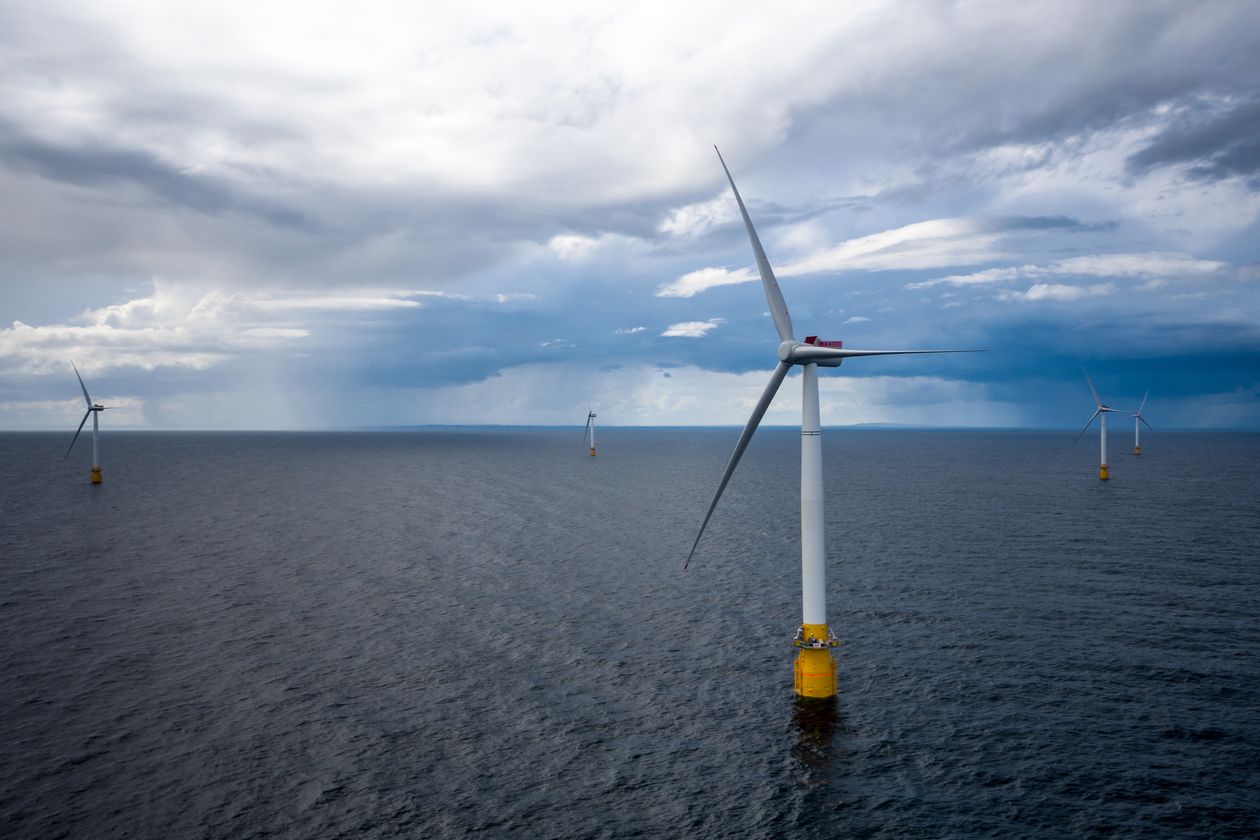 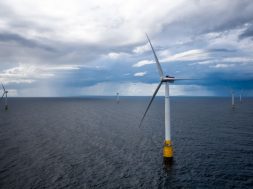 Off the east coast of Scotland, in water more than 300 feet deep, five towering turbines weighing thousands of tons float in the North Sea. Installed in 2017, the turbines power about 36,000 homes a year.

Wind farms have been erected on land and at sea for decades, but Hywind Scotland, operated by Norwegian oil giant Equinor AS A, is the first to float. Instead of being inserted into steel tubes buried in the seabed, the turbines sit in cylindrical buoys that are fixed to the seabed by mooring lines. The approach promises to enable wind farms in much deeper water, where there are often stronger winds, opening up swaths of untapped coastline to renewable energy.

Equinor believes that there are many countries where floating wind could be the best option for generating renewable power. In some places, such as Japan, South Korea and the U.S., a steep drop off the continental shelf means the water is too deep for fixed wind turbines, which are limited to depths of around 60 meters, or just under 200 feet.

The technology is gaining interest as governments scramble to reduce their carbon emissions footprint. The 2015 Paris climate accord, where governments agreed to limit global temperature increases to less than 2 degrees Celsius, with an ambition to cap them at 1.5 degrees Celsius, has focused attention on limiting emissions, which renewable energy helps address.

Still, floating wind is almost double the cost of fixed offshore wind, which needs an average price of $84 per megawatt-hour of electricity for projects to break even, according to industry group the Global Wind Energy Council. There are dozens of concepts for floating platforms in the works, preventing the savings that come with standardization and mass production. Longer cables needed to send power back to land can also increase expenses. The internal rate of return, a measure of profitability of investments, is around 10% for fixed wind and not yet known for floating wind.

Another limitation is the slow pace at which governments are developing policy to enable projects.

“We will start with where you see an appetite from government and where you see an energy need that cannot be met by obvious, much cheaper options like onshore wind, solar and to some degree fixed offshore wind,” says Sebastian Bringsværd, head of floating wind development at Equinor.

Some governments are realizing that floating wind may be their only option for meeting carbon reduction targets, particularly if they have limited space for solar and wind projects onshore, Mr. Bringsværd says. Whether fixed or floating, wind farms in the sea don’t face as much public resistance over their impact on the environment and landscape. They are not visible from shore when they are farther than 30 miles out. Cables can be buried all the way to the power station, but this can be more difficult if the cable lands ashore in a residential area.

Floating offshore wind turbines could soon power communities whose coastline waters are too deep for turbines fixed in the seabed. Equinor operates the world’s first floating wind farm, which started up in 2017 off the coast of Scotland. More expensive than fixed turbines, the floating version can be used in deeper water where winds blow stronger and more consistently. 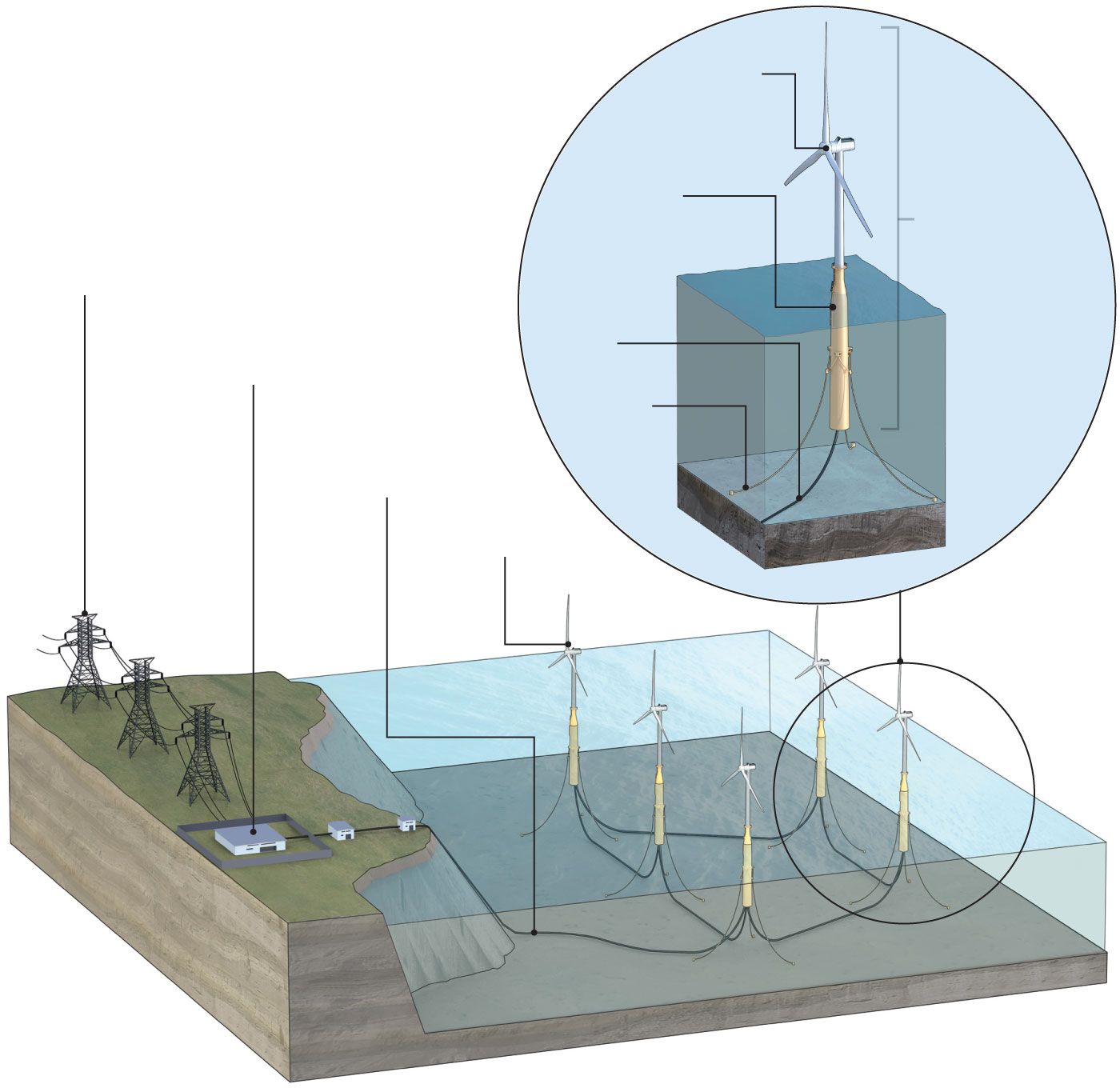 Some oil-and-gas companies seeking to expand in renewable energy see floating wind as a natural extension of their expertise, having spent years building floating oil and gas facilities to extract fossil fuels from deep beneath the seabed.

Energy giants including France’s Total SE and Royal Dutch Shell PLC have invested, consistent with their plans to reduce dependence on oil and ramp up spending on low-carbon energy. Shell bought Paris-based floating wind specialist Eolfi SA in 2019. Utilities already active in wind energy are also testing floating technologies, including Spain’s Iberdrola SA and Germany’s RWE Group. Both companies are involved in single-turbine pilot projects due to start up in Europe in the next two years.

There are plenty of opportunities to pursue. Countries including Japan, South Korea, the U.K., Spain and some states in the U.S. are planning for floating wind projects off their shorelines. Some regions are setting offshore wind targets, including the European Union, which aims for capacity to grow fivefold to 60 gigawatts by 2030. Some of this will need to come from floating wind, according to Equinor.

“The low hanging fruit of fixed-bottom wind has been picked,” says Bruno Geschier, chief sales and marketing officer at France’s Ideol SA, which designs and builds floating foundations for turbines. The company’s technology has been used in France and Japan since 2018 in single-turbine pilot projects.

President Biden’s move to return the U.S. to the Paris agreement and plans to boost green energy investment have also spurred optimism in floating wind.

“The willingness of governments to make sites available is key, that has been one of the restrictions of the development of the U.S. market,” says Joao Metelo, chief executive of California-based Principle Power Inc., which designs and makes floating platforms.

The company has developed a three-column semi-submersible platform which helps distribute the weight of the turbine and stabilize it. The company is considering future projects including at water depths of over 3,000 feet. In 2018, California’s Redwood Coast Energy Authority selected a consortium including Principle Power, Norwegian oil-services company Aker Solutions AS, and the renewables unit of Portugal’s largest utility Energias de Portugal SA, to enter into a public-private partnership for a proposed floating wind project.

The wind blows harder and more consistently farther from shore, which means that floating offshore wind projects have the potential to generate more power than fixed-wind projects. In 2019 Equinor’s Hywind Scotland project achieved 55% of its potential power capacity. This compares with fixed offshore wind projects which average 29% to 52%, while solar photovoltaic is less than half of that, according to the International Energy Agency.