France announced on Monday it was raising its renewable energy goals and would become the first country to issue “green bonds” to fund projects which benefit the environment.French President Francois Hollande also confirmed that the country’s oldest nuclear power plant, Fessenheim – which sits near the German and Swiss borders – would be closed.Hollande was speaking at a national environment conference in Paris, where he sought to further carve out his country’s role as a leader in energy transition after the signing of a global climate pact in Paris in December.Also at the conference, Environment Minister Segolene Royal said a road-map for France’s energy transition up to 2023 would be published on Wednesday, with higher objectives than initially planned.

She said that the number of wind farms would double in France, while electricity obtained from solar energy would triple.The amount of renewable energy sources used for heat production would increase by over 50%.In 2015, wind farms provided 4.5% of French electricity, and solar energy 1.6%, of a total of 18.7% provided by all forms of renewable energy.Hollande said that to achieve the goal of decreasing the share of nuclear energy in electricity production from 75% to 50% by 2025 “renewables must be increased even faster”.That goal was written into France’s energy transition law, signed in August 2015.The French conference comes four days after more than 170 nations signed a historic Paris climate deal to limit climate change in New York.

Hollande was the first to put his pen to paper and sign the deal and urged his counterparts to turn their promises into concrete action.To show the way, he announced on Monday that France would be the first country to issue “green bonds”, which up until now have only been issued by companies or finance institutions such as the World Bank.The proceeds of such bonds are used to finance projects to address climate change.”Paris could become the leader in green finance,” said Pascal Canfin of the World Wildlife Fund in France.Hollande also announced that energy giant EDF would close several nuclear power stations from 2018, while others will see their lives extended.He said that the first to close would be Fessenheim, which Germany complained earlier this year was, at nearly 40-years-old, “too old to still be in operation”. 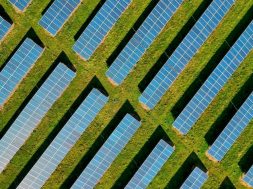