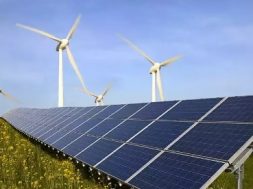 France will continue to support India to help achieve its ambitious target of having 500 GW of renewable energy by 2030, French Ambassador to India Emmanuel Lenain said on Thursday.

Prime Minster Narendra Modi had announced the target of 500 GW of renewable energy in India by 2030 at the COP26 conference in Glasgow earlier this year.

Participating in an international conference on One Sun, One World, One Grid (OSOWOG), organised by industry chamber CII, Lenain fully endorsed India’s pioneering initiative of OSOWOG.

”As the co-president of International Solar Alliance, France fully supports the One Sun One World One Grid (OSOWOG) initiative, and we are happy to join its steering committee. ”We all share the objectives to increase the share of renewables in the energy matrix. France will fully support India to achieve the ambitious target set by PM Modi at COP26 in Glasgow,” he said in a video message.

Roughly 10 per cent of solar capacity in India has been installed by French companies, and more than 20 GW of capacity addition is in pipeline with French support, the ambassador said.

He asserted that France will continue supporting India through its expertise, latest technology and finances. Ajay Mathur, Director General, International Solar Alliance (ISA), said the vision of OSOWOG is based on the basic mantra of ”The Sun Never Sets”.

The idea of cross-border solar connectivity is envisioned to set up a framework for facilitating global cooperation for interconnected renewable energy resources that can be seamlessly shared among nations, he pointed out.

The ISA is taking the lead in enabling collective global action through a multilateral effort towards ‘net zero’ under the joint leadership of India and the UK. A Steering Committee has been formed for Green Grids Initiative — One Sun One World One Grid (GGI-OSOWOG) which comprises five members — India, UK, US, Australia, and France.

The committee will collectively decide on actions to take the OSOWOG initiative forward. The GGI-OSOWOG offers key benefits for participating countries by providing an opportunity to facilitate in global energy transition, multiple techno economic benefits and building global economic cooperation.

Upendra Tripathi, former director general of ISA, reaffirmed the vision of the Alliance for an interconnected grid.

He said the smart grid technology will integrate different world zones — that is, transmission of energy from areas which have surplus to those in deficit.

The OSOWOG initiative is estimated to be more cost efficient than decarbonising the existing grid infrastructure.

Pratik Agarwal, chairman of CII taskforce and managing director, Sterlite Power, while moderating the session said CII has been deeply engaged with OSOWOG since the very beginning.

The idea of OSOWOG is lucrative, feasible and implementable, and has the potential to reduce 70 per cent greenhouse gas emissions, caused by fossil fuels.

It provides a great opportunity for the world to address climate change challenge while ensuring energy security, he noted.

For smooth take-off and scaling up of OSOWOG, there is a need for supportive regulatory environment, multilateral funding and vibrant cross-country power trading market, he added.