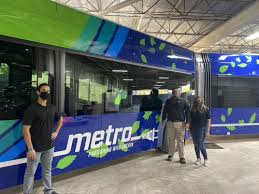 The U.S. electric fleet charging market is small but growing, just like domestic EV adoption. But the competition is heating up.

German startup The Mobility House launched in 2009 to figure out dynamic charging for electric fleets, the kind that use enough power to throw off a facility’s electric bills without careful scheduling. Mobility House’s ChargePilot platform orchestrates fleet charging based on vehicle schedules, utility rates and site constraints, and operates vehicle-to-grid and stationary storage projects in Europe.

Mobility House has flown under the radar in the U.S., where it opened a Silicon Valley outpost in 2014 and staffed up over the last two years. But that profile could be about to change with the opening of an electric bus charging system in St. Louis, Missouri.

The new project could be the largest of its kind in the country in terms of charging capacity under management, the company says. St. Louis Metro Transit now charges its growing electric bus fleet with twenty 150-kilowatt chargers and three 450 kW chargers, totaling 4.35 megawatts.

That’s still just a small part of the transit fleet. But the investment is notable in that the electric bus market is penetrating into communities that don’t dominate the headlines around vehicle electrification. Though electric buses are typically more expensive upfront than the diesel alternative, manufacturers contend that lifetime costs of ownership are already lower due to cheaper fuel and maintenance costs.

“This is a project not in New York or L.A. — this is a project in the Midwest,” Greg Hintler, Mobility House’s U.S. managing director, said in an interview. “I see this very much as a landmark project [and] a sign that these types of electrification projects are possible everywhere and that they make sense everywhere.”

Now that the equipment is installed in a central depot and along a few bus routes, Mobility House’s job is to make sure each bus has enough power to complete its journey on schedule. After achieving that, the startup maximizes bill savings by adjusting charge schedules based on utility Ameren Missouri’s time-of-use rates and demand charges. Mobility House estimates it can reduce charging costs at the site by 30 percent by optimizing around rate design.

Several companies have sprung up to tackle the challenge of smart charging for fleet operators who are used to pumping diesel, not navigating time-based electric rates. Serial entrepreneur Vic Shao launched Amply Power in 2018, pledging to simplify the customer transaction to a dollar-per-mile payment. Schneider Electric spinoff eIQ Mobility focuses on the software, running analytics for fleet operators as they decide whether to transition to electric. Charging software company Greenlots was acquired by Shell in 2019.

Mobility House hopes to stand out from the competition based on its relative age in an industry that’s in its early stages.

“We bring a huge wealth of experience,” Hintler said. “Our solution is already operational at hundreds of sites. It’s been vetted by the major [original equipment manufacturers] who are our partners.”

Interoperability is rapidly becoming a must-have, Hintler added. Transit customers don’t want to sign contracts that lock them into particular bus or equipment vendors for years. Affirmation of open standards and interoperability are more common than not among charge-management companies, so that philosophy is not itself a major differentiator.

But linking up vehicles, chargers and auxiliary equipment to a software ecosystem takes dedicated effort and must be sustained while the industry continues its technological maturation.

“It’s one thing to say you’re a proponent of interoperability, but actually having the interfaces is something else,” he said. “It takes a lot more than a year or two to create such an open system and platform.”

Mobility House is venture-funded, currently raising a C2 round to follow a C1 that transpired earlier this year. Past investors include Daimler AG and Mitsui, as well as the venture capital arm of Renault-Nissan-Mitsubishi. That money could fund a bigger footprint in the U.S. market.

“We want to be the prime provider of charge-management solutions for the fleet space in the U.S.” Hintler said. “We’re here to stay and…to really make an impact and share some of the experience that we’ve gathered in Europe.”

This week’s Greentech Media’s virtual Grid Edge Innovation Summit 2020 will feature in-depth conversations with utilities and companies tapping electric vehicles and EV charging infrastructure to enable grid flexibility. To learn more about the role of EVs and other forms of distributed energy in decarbonizing the world’s power grids.