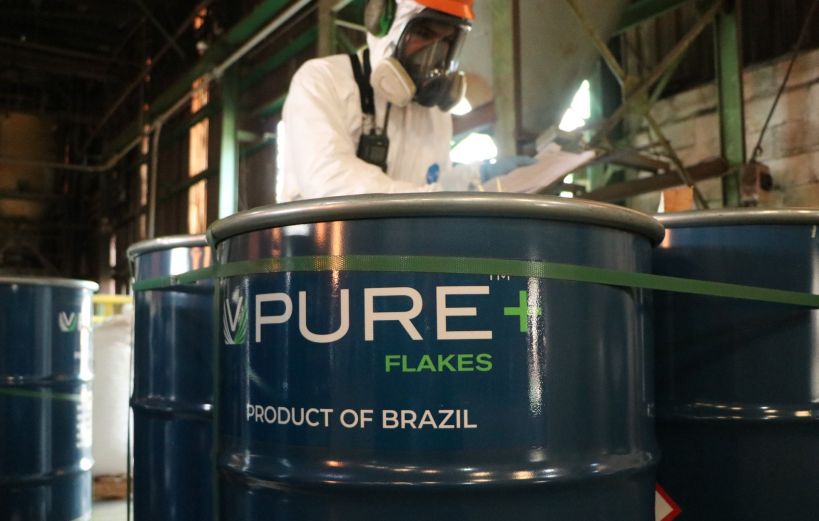 Vertically-integrated vanadium mining, production and supply company Largo Resources wants to launch its own vanadium redox flow battery (VRFB) onto the market within a year-and-a-half, predicting that the technology will play a “critical role” in addressing significant demand for energy storage.

Largo Resources formed a subsidiary, Largo Clean Energy, which was formally launched in December. The company has developed a battery product called VCHARGE±. In reporting its fourth quarter and full-year 2020 financial results yesterday, Largo Resources said it wants to be able to capitalise on “new renewable energy storage opportunities around the world”.

A company representative emailed Energy-Storage.news to highlight that Largo anticipates having a battery “powered by its own vanadium” on the market in 12 to 18 months. The representative said that the latest results on the company’s performance “position the company well for its transition to a clean tech play as a producer of VRFB powered by its own high quality, low cost supply”.

The company’s vanadium mine in Brazil performed well enough to register record output in both Q4 and the full year, while sales guidance for 2020 was exceeded by 260 tonnes. While the amount of total ore mined through the year was lower than in 2019 largely due to limitations on workforce numbers and availability due to COVID-19, Largo Resources reported strong performance in its various recovery processes for the different grades of vanadium it supplies for use in a number of industries.

CEO and president Paulo Misk said that not only have vanadium prices in the first weeks of 2021 “increased in all main markets,” the company believed that “growing interest from the battery sector will continue to drive future vanadium demand growth in 2021 and beyond”.

“With the addition of Largo Clean Energy in December 2020, we are working to develop our clean energy storage business in 2021 to provide safe and sustainable vanadium redox flow battery systems to the fast-growing renewable energy market,” Misk said.

In launching its VRFB subsidiary, Largo Resources acquired technology owned by VIONX Energy, a company that was making efforts to commercialise its vanadium battery storage systems in the mid-2010s, raising some US$150 million in investment and deploying several megawatt-scale systems before exiting the industry. Largo also took on some of VIONX’s technical team along with 12 technology patents.

In yesterday’s financial results presentation, the company highlighted the potential merits of VRFB technology including longevity, the lack of degradation in performance, the reusability of electrolytes, its non-flammable nature and deep discharge capability. Largo believes the technology can be suited for applications including commercial and industrial (C&I) microgrids, integrating renewables, electric vehicle (EV) charging and grid storage.

“We remain very excited for the year ahead as the Company continues the necessary work to become a key player in the renewable energy storage industry,” CEO Paulo Misk said.

Leadership of Toronto-headquartered Largo Resources is hoping to list the company on an unnamed “major US Stock exchange” and is holding a Special Meeting of shareholders to seek their authorisation to take share consolidation measures on 25 January. The company is already listed on the Toronto Stock Exchange but said listing in the US would increase access to US capital markets and enhance shareholder value.

Wevo-Chemie, a maker of industrial resins based on polyurethane, epoxy and silicone headquartered near Stuttgart, Germany, said that its sealant products have been independently verified as resistant to corrosion which could be caused by electrolyte in flow batteries.

The company emailed Energy-Storage.news today to say that it tested some of its resins and adhesives in cooperation with Fraunhofer Institute for Chemical Technology (Fraunhofer ICT) in a sulphuric acid electrolyte which contained vanadium for their resistance.

Wevo said that the design of battery stacks for flow batteries, including those based on vanadium electrolytes, has been “a real challenge” due to stress caused on materials by “aggressive” electrolytes. Testing Wevo polyurethane, silicone and epoxy resin samples at different oxidation levels for 135 days showed no significant changes to either test materials nor electrolytes, the company said.

Using Wevo’s materials for sealing and bonding instead of rubber and silicone seals typically used in flow battery manufacture therefore could be an option that allows for “more freedom in the design of the battery stacks,” the company claimed while also claiming that the resins can seal bipolar membranes inside the battery in a way that protects them from corrosion. In a residential storage system, this would also protect the battery system user from corrosive electrolyte, Wevo said.