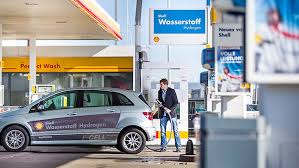 PetrolPlaza spoke to Jens Müller-Belau, Energy Transition Manager at Shell Germany, to learn about the different hydrogen projects they are involved in, green hydrogen production, and the potential for heavy-duty vehicles.

Global oil giant Shell has invested heavily in renewable energy and alternative fuels over the last ten years. In retail, Shell has transformed its business to be centered around convenience, and is now involved in all forms of energy to power vehicles. When it comes to hydrogen fueling, it had already joined the race 20 years ago.

In 2005, former President of the United States George W. Bush could be seen fueling up a fuel cell vehicle (FCV) at a Shell station in Washington D.C. At the time, the hydrogen-powered economy did not take off but their work laid the ground for the projects we are seeing today. With the increasing demand for renewable energy, the time might be now.

With around 50 stations currently dispensing hydrogen across five countries, Shell has become a driver for the FCV mobility sector. In Germany, where Shell Hydrogen is part of the H2 Mobility joint venture, the network continues to expand and now has 37 sites. California has eight Shell hydrogen refueling stations and the next one is expected to open in early 2021. The number will soon grow, with the California Energy Commission having awarded a $40.8 million grant to install hydrogen refueling equipment at 48 existing Shell sites. They also have stations in Canada, United Kingdom and the Netherlands.

Most of the projects Shell is involved in are alliances and joint ventures with private and public players. Jens Müller-Belau, Energy Transition Manager at Shell Germany, believes this is essential.

“Hydrogen is a team sport for us. You need to bring together industry players, customers and governments. One of the challenges that hydrogen has today, specifically green hydrogen produced from renewable power, is that it is factually more expensive than its current alternative, which is produced from natural gas. Aside from that you need to work on the demand. In California regulators have supported both supply and demand. That is the synergy you need today to make green hydrogen a viable option,” explains Müller-Belau.

Tapping into the whole value chain

Shell Hydrogen’s projects range from collaboration with car manufacturers to improve the sale of FCVs to the production and distribution of green hydrogen. The world’s biggest electrolyser is currently being built at Shell’s Rheinland Refinery, which will produce around 1,300 tons of green hydrogen per year. In Rotterdam, Shell is planning a hydrogen hub with a capacity of around 200 MW powered by offshore wind power. The goal is to start operations by 2023 to produce about 50,000 – 60,000 kg of hydrogen per day.

A massive player for the hydrogen market is China due to the vast number of projects it has in place. There, Shell has signed a joint venture with Zhangjiakou City Transport to build a 20 MW renewable power-to-hydrogen electrolyser project and refueling stations in China.

“The investment from China can be a booster in similar fashion to the impact they had on battery-powered vehicles. The market is huge. Our intent is to play there as well. It will be more of an accelerator than anything else,” says Müller-Belau.

When discussing if hydrogen can become a major form of fuel for transport and industry, a key factor is storage and distribution. Shell Hydrogen is working with partners on the delivery of the world’s first liquefied hydrogen carrier. The ship, Suiso Frontier, was launched in Q4 2019 and will enter sea trials in early 2021. It will be a pilot for potential large scale distribution of hydrogen between Australia and Japan.

What is the potential of hydrogen in the heavy-duty vehicle sector?

Hydrogen’s high density makes it a suitable fuel for heavy vehicles; and car manufacturers such as Nikola, Toyota and Hyundai have developed fuel cell trucks. The latter rolled out its first batch of XCIENT Fuel Cell trucks in Switzerland and expects to reach 2,000 units per year by 2021 to supply Europe, the U.S. and China.

“Regulators are now demanding very low levels of CO2 emissions. For vehicle manufacturers, hydrogen is a substantial opportunity for long-haul trucks. The benefits of hydrogen versus battery are even more relevant – longer range and shorter refueling time. Manufacturers see the benefit of hydrogen in the context of all other emissions because you are not burning anything. Fuel cell with green hydrogen really gets you to a zero emission world so we see a lot of potential and OEMs really focusing on it,” points out Shell Germany’s Energy Transition Manager.

“It’s all about learning. We are preparing to build heavy-duty sites in Europe too. The question is not if, but when. We are waiting for customer fleets that need the product – our job is to be ready.”

The percentage of FCVs on the road continues to be extremely low compared to other types of fuel. It remains to be seen if mobility will sway towards hydrogen, with many hurdles along the way and a clear need to increase vehicle demand. Müller-Belau sees positive elements among politicians and industry players, and how hydrogen could play a big role in the decarbonization of Europe. “It’s an exciting time.”