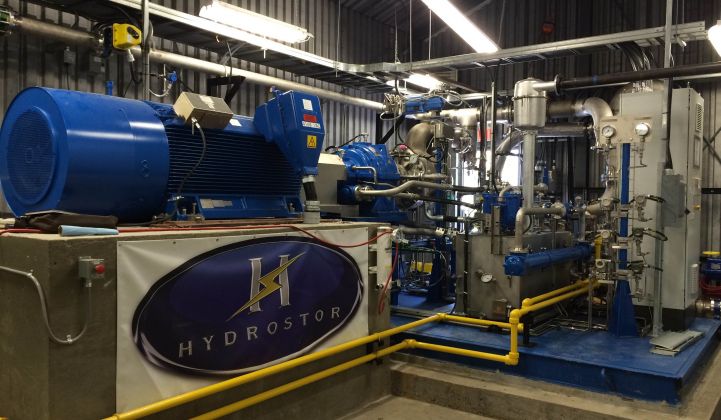 Hydrostor Will Build Compressed Air Storage for the Australian Grid 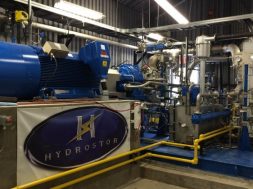 Hydrostor Will Build Compressed Air Storage for the Australian Grid

The project could lay the groundwork for unconventional storage on a massive scale.

Canadian startup Hydrostor will build a novel compressed-air storage device in renewables-rich South Australia, the company announced last week. It plans to use the 5-megawatt project as a “showpiece” to educate customers and the public on this unusual technology.

Lithium-ion batteries rule the storage market, but they don’t excel at very long-duration storage. That long-duration resource is becoming more valuable in regions where a large share of wind and solar power supplies the grid, making for booms and busts of production.

Hydrostor uses surplus electricity to pump air into an underground cavern partially filled with water, which helps maintain constant pressure. It can store more energy by digging a bigger hole, or extracting water from an existing cavern to make room for more air. The company’s IP revolves around how to sync up equipment developed by other industries, like mining and oil and gas extraction, into a large-scale storage plant.

Compressed-air energy storage has been around for years, but failed to proliferate because it relied on specific geological features which limited potential sites. A handful of startups tried to modernize the concept, but they flopped. By excavating its own caverns, Hydrostor hopes to avoid the limitations of its forebears.

If Hydrostor can prove its technology in Australia’s wide-open power market, it could lay the groundwork for megaprojects, on the order of hundreds of megawatts each, that the company says are already in its pipeline.

Showcase project
The Australia project, located at the discontinued Angas Zinc Mine, looks like a demo project but will operate commercially.

Hydrostor made the economics work by winning $6 million from the Australian Renewable Energy Agency and $3 million from South Australia’s Renewable Technology Fund. The company will pay for the rest of the bill itself.

Government support has been common in Australia’s early grid batteries. Storage supplier Fluence broke the mold by securing unsubsidized financing for a battery, announced in November, slated for a wind farm in South Australia.

That said, Hydrostor’s system will operate as a full-fledged merchant asset connected to Australia’s National Energy Market. It will be free to bid into a suite of grid services, or play the arbitrage game, charging up when energy prices are low and discharging when price shoot up to the market cap, as happened in January’s heat wave.

“It shows every bit of IP we’ve got,” said Curtis VanWalleghem, Hydrostor’s CEO. “It’s a marketing showpiece in Australia, which is such a high-profile market for storage.”

The company is gearing up for construction, waiting on the last permits, VanWalleghem said. He plans to complete it by early- to mid-2020. The finished site will include a visitor center, and the team will document the construction process, to further promote the technology.

The first was a pilot that used underwater balloons to test the “hydrostatically compensated” design. Next came a fully automated 2 megawatt system for Ontario’s Independent Electricity System Operator, which is undergoing commissioning.

That system will start with 8 megawatt-hours, VanWalleghem said, but he plans to expand that to 15 megawatt-hours by suctioning more water out of the salt cavern site. The plant won a 10-year capacity contract from the IESO, and Hydrostor can also use it for ancillary services.

The Australia project will utilize an existing mine shaft with the depth and specifications that Hydrostor has identified as optimal for its technology. That saves the trouble of excavating for such a small project; it won’t be particularly long-duration, starting with 10 megawatt-hours.

The company’s ambitions go far beyond the scope of these projects. The industrial equipment comes sized for much larger scales, so that’s where the economics will really shine.

Globally, Hydrostor has more than 15 sites in its development pipeline. It already bid storage plants as massive as 200-megawatt systems with 6 hours of duration, and a 300-megawatt, 12-hour system, VanWalleghem said. That would dwarf any new storage on the market today.

At the scale of 500 megawatts with 10 hours of energy, Hydrostor can hit the $100 per kilowatt-hour threshold, VanWalleghem said. That’s the near-mythical threshold that many a startup has targeted in the effort to unseat lithium-ion’s supremacy.

The company has a massive distance to cover from what it’s achieved to what it aspires to. That gap will be easier to close if the Angas project convinces financiers and engineering, procurement and construction partners that the technology merits bonding and performance guarantees.

At that point, Hydrostor can get to work in earnest on building those mega-projects.

“We get one or two scale projects, and our business makes economic sense,” VanWalleghem said, before adding, “We obviously expect to do a lot better than that.”