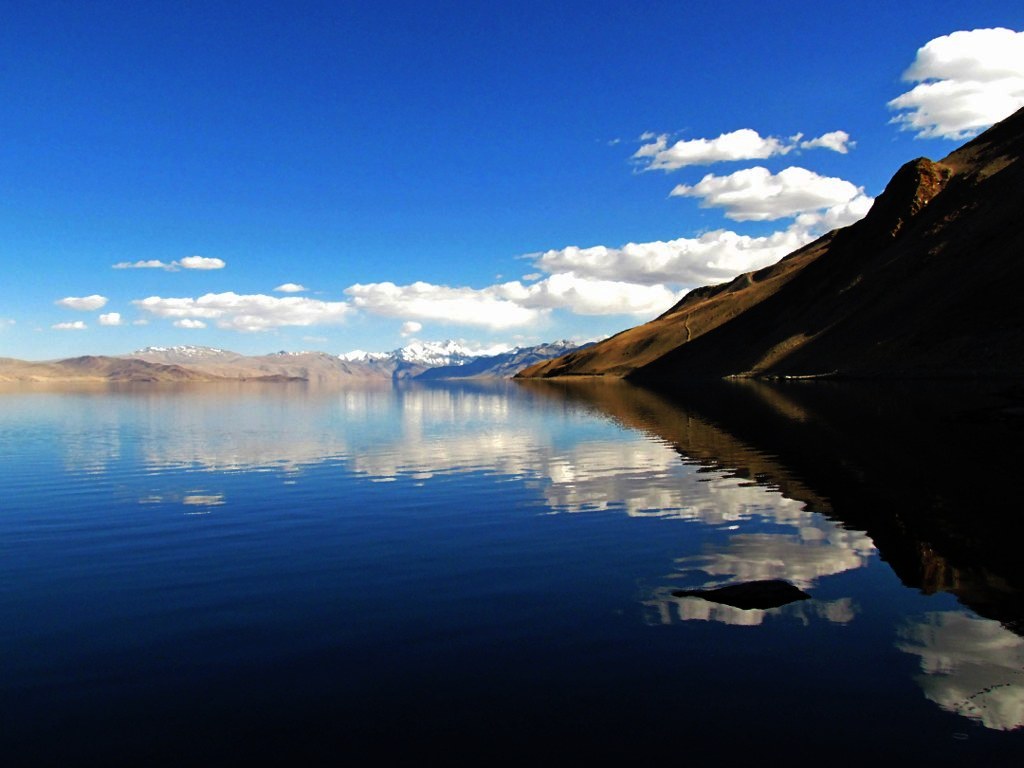 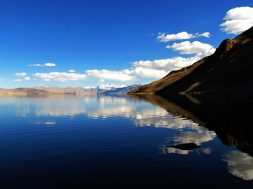 India is on a hunt for viable alternatives to replace its aging coal fleet and reduce its dependence on oil and gas.

As the search extends beyond conventional renewables of solar, wind and power, the massive energy potential of the Himalayas has once again come into sharp focus.

Following the rapid development of hydropower potential across the Himalayas, efforts are now increasingly directed at tapping the region’s solar, wind and geothermal energy potential.

The high-altitude lake of Tso Moriri in Ladakh.

Ladakh, India’s newest Union Territory, has emerged as perhaps the most important cauldron for India’s new energy aspirations in the Himalayas. With an aim to make the Union Territory carbon neutral, Ladakh’s administration and the central government of India are assessing the potential for geothermal power.

Additionally, efforts are also underway to tap into Ladakh’s capacity to produce green hydrogen – which is produced from renewable sources of power like solar and wind.

Ladakh’s renewables push appears to be in line with Prime Minister Narendra Modi’s carbon-neutral vision for the Union Territory, which he has repeatedly stated.

The first signs of actual movement in this direction came at a conference last year in November, when Ladakh’s Lieutenant Governor, RK Mathur, told global investors and energy stakeholders about the region’s capability to become “a hydrogen-driven” Union Territory and alluded to the development of decentralised hydrogen power capacity in Ladakh.

Later, Mathur told both the ministries of renewable energy and power that green hydrogen is “the best alternative to make Ladakh carbon neutral” and forwarded the possibility of “replacing diesel with green hydrogen energy for electricity, heating and transportation purposes”.

“There is a clear inclination towards decarbonising Ladakh,” said Tirtha Biswas, the programme lead at the Council on Energy, Environment and Water. “Ladakh has a good renewable potential of almost 40GW and hydrogen has a role to play,” he added.

Hydrogen is now well and truly on the radar in India’s energy pursuit. Finance minister Nirmala Sitharaman made this much clear as she announced the National Hydrogen Energy Mission during her budget speech in February this year.

For the Centre, hydrogen-fuel is crucial for a low-carbon transition in industrial sectors. Specifically, the plan focuses on producing hydrogen from renewable sources like solar and wind power.

For Ladakh, the hydrogen fuel’s growing momentum offers a clear opportunity. At present, Ladakh has a 200 KW green hydrogen pilot project at the Sonam Norboo Memorial Hospital in Leh.

According to Mathur, the pilot’s success would count as a “big achievement” in meeting the electricity demand, with potential for the model to be “scaled up for use by the Army and tourists”.

“High altitude valleys have strong solar irradiance and these valleys also have a good wind profile… this combination [of both solar and wind potential] is also very interesting because they complement each other,” Biswas said.

In a day, solar power generation potential is about 4-5 hours and it peaks in the afternoon. So, in the off-peak hours, reliance can be placed on wind power. Effectively, this combination provides for a stable source of renewable power.

Although officials are keen, green hydrogen can be invariably land intensive given India’s propensity for large solar and wind farms.

Ulka Kelkar, the climate programme director at the World Resources Institute in India, pointed out that while creating large-scale energy infrastructure, we also need to respect the ecological uniqueness of landscapes like Ladakh.

“It would be ideal to come up with hybrid approaches that generate modern electricity services while also protecting local biodiversity and livelihoods that depend on natural resources,” she said.

Water is another constraint because “you need water to produce hydrogen,” Biswas said. “So we need to understand the hydrological impact of hydrogen production in a high altitude area in the winters,” he added.

What the national mission must do to give green hydrogen the push it needs – both in Ladakh and India as a whole – is financial assistance via means like viability gap funding, Biswas points out.

Viability gap funding is usually provided by the government for privately run infrastructure projects to make them economically feasible.

Aside from green hydrogen, officials in Ladakh are also looking to develop geothermal power – which is electricity generated from heat sources, including steam, hot water, magma and hot dry rock, within the earth’s crust.

“Ladakh is probably the best place in India for generating geothermal power because subsurface temperatures are very high,” said Anirbid Sircar, professor and dean of research and development at the Pandit Deendayal Petroleum University in Gujarat.

In February this year, an MoU was signed by the administration of the Union Territory of Ladakh to establish the first ever geothermal field development project in India at Puga in Ladakh – a step hailed by Mathur as “a promising initiative towards innovative and sustainable development” of Ladakh.

In Phase 1 of the project, the power generation aim is 1MW, which will be supplied to the public free of charge, according to the press release announcing the project.

In Phase 2, a “deeper and lateral exploration of [the] geothermal reservoir” has been planned via the drilling of wells and the setting up of a higher capacity demo plant in Ladakh. And commercial operations have been planned for phase 3.

“The project [at Puga] is still at a very nascent stage and no systematic exploration and exploitation has been done yet,” said Sircar. Comparatively, Gujarat has “already exploited geothermal power by digging shallow wells that generate about 20KW of electricity [which is used for captive consumption],” he added.

But, Sircar pointed out, Ladakh is a much better place for geothermal power than Gujarat and places like Puga are “very promising” because of natural geological conditions.

“The Puga hot spring area, located at the junction of the Indian and Tibetan plates along the Indus Suture Zone, has the greatest potential for the near-term development of geothermal energy in the Indian subcontinent,” a November 2013 paper noted.

It added that the area “exhibits vigorous geothermal activity in the form of hot springs, mud pools, sulphur and borax deposits… It is estimated that more than 5,000 MWh of geothermal energy is available at Puga, which could be used for heating, for greenhouse cultivation and, eventually, to generate electricity.”

Puga is “unique even when we consider the whole country, not just Ladakh”, said Ghulam Bhat, a professor at the Department of Geology, University of Jammu, and one of the authors of the 2013 paper. He noted that the surface temperature of water in the area is more than 90°C.

The area was also surveyed by the Geological Survey of India (GSI) in the 1970s. “They [GSI] drilled boreholes and the maximum depth they reached was 284 m and the temperature here was 260°C.

From what has been studied until now, this is the hottest spot in the whole of India. And this makes it very favourable for the generation of electricity,” Bhat added.

In fact, a 1991 Geothermal Atlas of India prepared by the then Indian government had identified Puga as having high geothermal potential.

But before going ahead with such geothermal energy exploration and exploitation projects, environmental impact assessment studies are the need of the hour.

“There is no environmental impact assessment policy in India as far as geothermal energy is concerned,” Sircar said. Environmental studies similar to the ones currently in place for oil and gas exploration need to be in place for geothermal power because “the stress and strain on the land has to be understood,” he added. 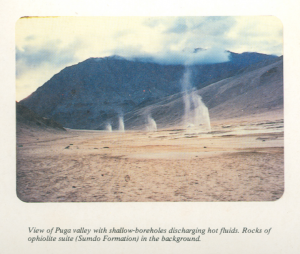 “I am not in favour of directly drilling holes and going ahead with [Geothermal] projects, ” Professor Bhat said. “This is an exotic area with a lot of rare and endangered wildlife. Drilling and exploration [without thorough assessments] can cause habitat destruction and a lot of disturbance to wildlife. Also, the region is virtually free of devastation.”

The high levels of seismicity of the region adds to the need for detailed studies of the associated risks. The seismic risks of geothermal exploration have been known for some time now and several earthquakes around the world in recent years have been linked to geothermal energy projects.

According to Bhat, there is little evidence of such seismic risks in Ladakh. “Ladakh is not very seismically active. The region does not have a history of major earthquakes in the past 100 years or so.

Earthquakes here are usually between magnitudes of 3-5 (on the Ritcher scale),” Bhat explains. He, however, adds that given how geothermal power in Ladakh is still at a very nascent stage, more research is needed to understand potential risks, including seismic ones.

“Indonesia started working on geothermal power in 1980. Today, we have 2,200 MW of [installed geothermal] capacity,” said Riki Ibrahim, president director, Geo Dipa Energi, an Indonesian geothermal energy company. This makes Indonesia the second largest in the world in terms of geothermal capacity after the United States.

Indonesia is located in the Ring of Fire, a volcanic belt. And it is owing to such volcanic geology that it is routinely said that the country has 40% of world geothermal capacity.

He also added that the power production process is not land intensive. “For 1 MW, you need 0.2 hectares. But if you see solar photovoltaic, it needs 1 hectare for 1 MW,” he pointed out.

As for what specific measures Indonesia has taken to ensure there are no adverse impacts from drilling and explorations activities, Ibrahim pointed out that the geothermal sector has regulations similar to the oil and gas sector when it comes to drilling activities.

“But geothermal is less risky because there are no flammable elements… it’s only hot water and steam,” he added.

CarbonCopy sent emails to the MNRE and the Ladakh administration officials requesting for an interview about India’s plans for geothermal power, how they’re taking shape in Ladakh and ensuing ecological impacts. This copy will be updated if and when responses are received.

While Ladakh’s prospects to become carbon neutral are bright, it’s imperative the government errs on the side of caution. There are many lessons to be learnt from the mistakes made with hydropower – inadequate risk assessments being at the top of that list. A rushed, target-based top-down approach would only magnify these risks.

The energy generation potential of the Himalayas will be critical in ramping up energy access, especially in underserved mountainous regions of the country. For this however, India’s government must keep an ear to the ground.