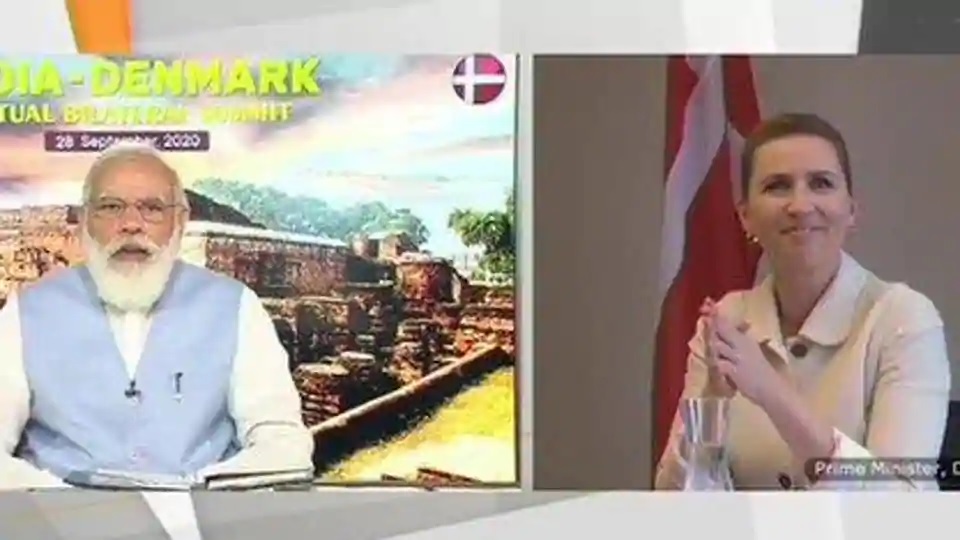 The decision was made during Prime Minister Narendra Modi’s first virtual summit with a counterpart from a European Union nation, Danish Prime Minister Mette Frederiksen. The two leaders also agreed to expand their cooperation on ways to combat Covid-19 and future pandemics, including the development of vaccines.

India and Denmark on Monday elevated their relations to a “green strategic partnership” that will focus on expanding economic ties, green growth and cooperation on global challenges such as climate change.

The decision was made during Prime Minister Narendra Modi’s first virtual summit with a counterpart from a European Union nation, Danish Prime Minister Mette Frederiksen. The two leaders also agreed to expand their cooperation on ways to combat Covid-19 and future pandemics, including the development of vaccines.

However, the issue of Danish national Kim Davy, the main accused in the 1995 Purulia arms drop case – which had taken India-Denmark ties to an all-time low in 2012 – also figured in the meeting and both sides agreed that concerned officials will work for an early resolution of the matter.

In his opening remarks at the meeting, Modi said the events of the past few months have highlighted the necessity of like-minded countries such as India and Denmark, which share a rules-based and democratic value system, to work together. The Covid-19 pandemic has also shown it is risky for global supply chains to rely heavily on any single source, he said.

“We are working together with Japan and Australia for diversification and resilience of supply chains. Other like-minded countries can join this effort,” Modi said, speaking in Hindi.

A time-bound action plan would be drawn up with specific targets for the next few years, she said. Danish companies with niche technologies and expertise have offered to help India in meeting its air pollution control targets, including in the key area of tackling the problem of burning crop stubble, she added.

Asked whether the matter of Kim Davy had figured in the meeting, Bhushan said the extradition of the main accused in the Purulia arms drop case was mentioned and the two sides agreed that the concerned officials will be in “touch with each other and both sides will work for the early resolution of the issue”.

In 2012, India had scaled down diplomatic ties with Denmark to signal its displeasure with the refusal of Danish officials to appeal in the Supreme Court against a lower court’s order barring Davy’s extradition. The two countries finally put their ties back on an even keel in 2018, when they decided to separate the Davy issue from the overall relationship.

With more than 140 Danish companies having a presence in India, Modi proposed the creation of “India-Denmark energy parks” in areas with large numbers of Danish firms and a “India-Denmark skill institute” to train Indian manpower.

Frederiksen, who was invited to visit India by Modi, offered to host the second India-Nordic summit in Copenhagen. “With India and Denmark joining hands together today, I am confident that we [will be] able to overcome both the situation when it comes to Covid-19 [and] climate change,” she said.

The joint statement said the two sides also agreed to hold regular consultations on climate change and renewable energy and to cooperate in water efficiency and water loss, with the Jal Shakti ministry and the Danish Environmental Protection Agency and Danish environment ministry being tasked to develop a work plan for 2021-23.