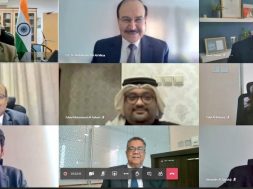 India and Bahrain have embarked on a programme for promoting bilateral co-operation in the field of renewable energy as part of its efforts to meet climate change goals.

Both the sides agree to forge deeper ties in the field of solar, wind and clean hydrogen, reported Wam.

The announcement was made at the virtual meeting of the Joint Working Group in the field of Renewable Energy which was attended by Dr Abdul Hussain bin Ali Mirza, President of Sustainable Energy Authority, who led the Bahraini delegation.

Dr Mirza said this builds on a MoU signed between India and Bahrain in July 2018 for promoting bilateral cooperation in the field of Renewable Energy.

The ministry said it was “a very productive meeting, in which both sides underscored importance of renewable energy to meet climate change goals, and presented the initiatives taken, progress made and future targets set by their respective governments as well as opportunities available in this sector.”

The two sides agreed on sharing experience, expertise and best practices in addition to forging deeper engagement in capacity building and focused cooperation between concerned agencies as well as the private sector of the two countries in this sector, particularly in the field of solar, wind and clean hydrogen, the report added.

In another initiative by India to engage governments in the Gulf, the first meeting of senior officials of the Saudi-India Committee on Political, Security, Social and Cultural Cooperation was held simultaneously.

The meeting took place under the aegis of the Saudi Arabia-India Agreement for Strategic Partnership Council. The Indian side was led by Sanjay Bhattacharyya, Secretary in the Ministry of External Affairs and the Saudi side by Dr Adel Siraj Merdad, Deputy Minister of Foreign Affairs for Political and Economic Affairs.

The Indian ministry said in a readout of the meeting that the Strategic Partnership Council reflects the desire of the leadership of both sides to impart further momentum to their bilateral relationship.

Discussions were also been held under the Committee on Economy and Investment between the two sides, it added.