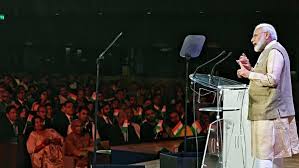 India to achieve most of COP 21 climate change goals in next 18 months: Modi 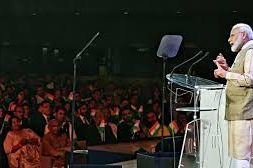 India to achieve most of COP 21 climate change goals in next 18 months: Modi

Paris: Prime Minister Narendra Modi on Friday said India will achieve most of the COP 21 climate change goals set for 2030 in the next one and half years.

In his address to the Indian community at the UNESCO headquarters here, Modi said there was a lot of talk about dangers of climate change but action was not evident.

He said it was India and France that took the decisive step of forming the International Solar Alliance.

“From solar infra to social infra, from technical infra to space infra and from digital infra to defence infra, the India-France alliance is moving forward strongly,” Modi said.

Modi said both India and France worked together positively under different circumstances.

“If today, France and India are closely cooperating in fighting the big dangers facing the world such as terrorism and climate change, the reason is these common ideals,” he said.

The 21st session of the Conference of the Parties (COP21) of the United Nations Framework Convention on Climate Change (UNFCCC) was held in Paris from November 30 to December 12 2015 that saw the participation of 195 nations.

The nations negotiated and adopted the Paris Agreement in which India made four commitments, including reducing greenhouse gas emission intensity of its GDP by 33-35 per cent below 2005 levels by 2030, under its Nationally Determined Contributions (NDC).

It also pledged that 40 per cent of India’s power capacity would be based on non-fossil fuel sources and that the country will create an additional ‘carbon sink’ of 2.5 to 3 billion tonnes of carbon dioxide equivalent through additional forest and tree cover by 2030.

India had ratified the Paris agreement on climate change in 2016 to become the 62nd nation to join the deal.