Karnataka’s Days in the Sun: The Paradox of Expanding Solar Parks

Karnataka’s Days in the Sun: The Paradox of Expanding Solar Parks

Harnessing solar energy is the perfect solution to India’s energy demands, but not for communities giving up their land and water to them. Still, win-win solutions exist.

Pavagada, Karnataka: When the solar panels quietly began to generate power in December last year, 38-year-old Mallika Arjun finally heard wedding bells. A farmer neck-deep in debt, he had been unable to find a family to accept him as a groom for their daughter.

Arjun was amongst the first farmers to lease their land to the government for the 13,000-acre solar park coming up in Pavagada, around 200 km north of Bengaluru. The solar park is part of India’s ambitious plan to generate 227GW of renewable energy by 2022. Solar will contribute about 113GW.

After leasing ten acres, Arjun’s fortune changed almost immediately. “I got more than Rs 6 lakhs for the land I leased. With this money, I could get married and pay off my loans. I have another ten acres which I am ready to give if they want it,” he said, standing beside his brand new motorcycle.

With the failure and unpredictability of rains over the last few years, farming in Pavagada has turned financially unviable – making farmers more than willing to give away their land.

As large solar parks come up all over the country, little attention is being paid to the voices of those living around them, as well as the effects on their immediate environment. Activists say we lack research on the effects on soil fertility and underground aquifers. Large solar parks also break up traditional commons, used by many vulnerable communities for grazing.

In December 2017, the Pavagada facility started generating 600MW of electricity. By March 2019, it is expected to generate 2,000MW (2 GW) and be one of the world’s biggest solar parks.

Every megawatt of solar energy requires between five and seven acres of land under abundant sun. With vast, semi-arid, drought-prone regions and undulating topography, Karnataka now leads the country – 5 GW of solar energy, or 24% of the national total, is already being generated in the state. 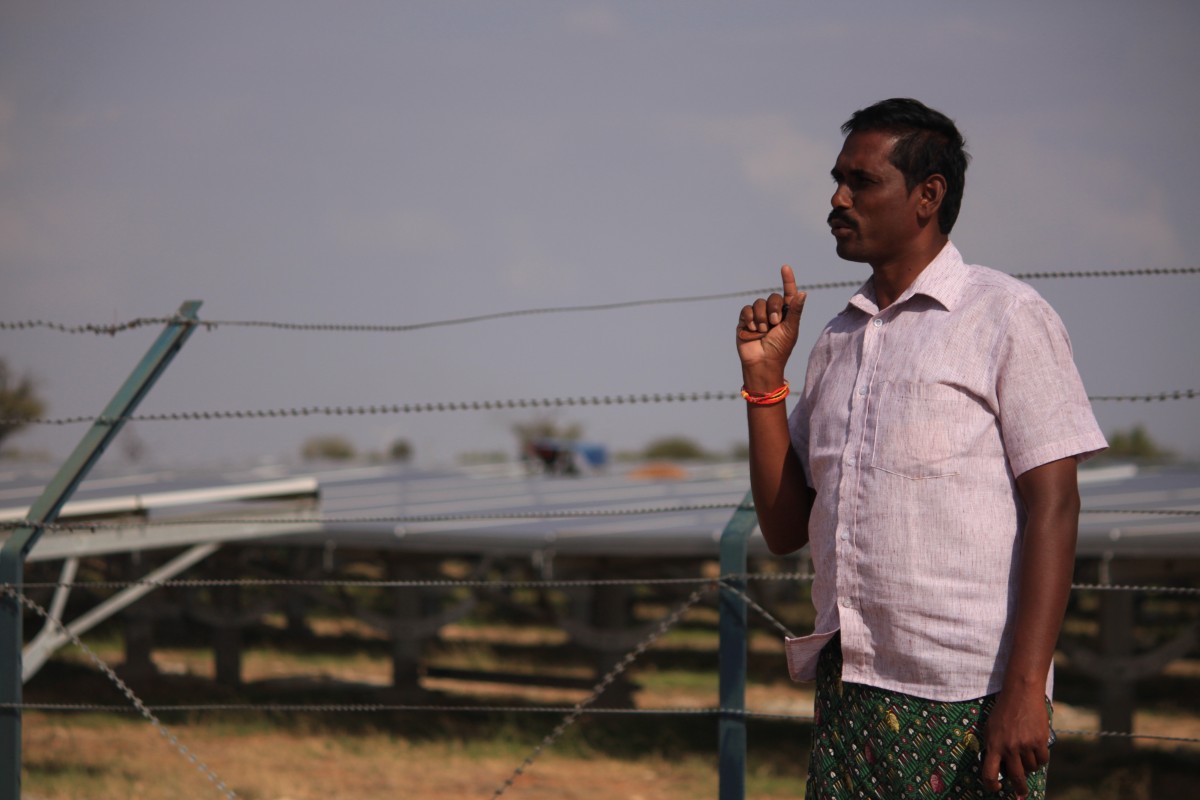 Mallika Arjun standing near the land he once farmed.

“The Union Ministry of New and Renewable Energy has set a 2022 deadline for 6,000 MW to be installed in Karnataka,” said G. Bhimsha, the chief executive officer of Karnataka Solar Power Development Corporation Limited (KSPDCL). “We are well ahead of schedule.”

Of the 13,000 acres that are needed for the project, 12,726 acres have been leased so far from close to three thousand farmers. “For those who do not want to part with their land, we are building approach roads so that they can access it to continue with their farming,” said Bhimsha.

In nearby Challakere, 1,250 acres of land was bought from farmers. In Pavagada, however, the state government has used a different strategy. “We don’t want to take away the lands from poor farmers. Their lands will be returned to them after 28 years. Poor rains over the last 45 years are making the farmers give their lands for the extra income,” said Bhimsha.

After 25 years, KSPDCL will take three years to remove installations and prepare the land for agriculture, he added. “If private companies want to continue their operations, they will have to work out a deal with the landowners,” he said.

To some farmer leaders in the region, however, the government is exploiting their new vulnerability. “All of us are neck-deep in debt, and the money is inviting. But will the land be the same after the soil underneath the panels is deprived of water and sunlight for so long?” asked Nagabushan Reddy, the president of Kisan Sangh in Pavagada. He estimates that the collective debt owed by the 2,855 farmers who have leased the land is about Rs 28 crore.

While Mallika Arjun is happy with his money, other landowners, like Rajalakshmiamma, a mother of three and a single woman farmer, are going against the grain and are refusing to part with their land.

“When my husband died 15 years ago, it was this land that gave me the confidence to bring up three children,” she said. “It is the only thing that will last.” Hiring up to a hundred people for several farm duties, she owns 30 acres of land, parts of which will be surrounded by solar panels. She is worried that she will not have access to her own land once the solar panels are built.

While the government compensates landowners, it does not take into account the traditional livelihoods of shepherds and landless agricultural labourers.

“While some farmers may be content with Rs 21,000 per acre per year as lease rent, the ones who don’t have any land will be the worst affected,” said Kavitha Kuruganti, a farmer activist. “Farming would have brought in some employment, food grains and fodder for the animals. Now, that will not be there. Shouldn’t the government be concerned about their livelihoods too?”

Fears of the land losing fertility can neither be proven nor dismissed, as large solar parks are exempt from the environmental impact assessments. Solar panels are mounted on concrete slabs that do not allow rainwater to reach the soil. Over the years, soil loses its moisture and its ability to retain water.

Alona Armstrong, from Lancaster University, studied the soil properties, vegetations and GHGs released and absorbed by grasslands at a 5MW solar park site, and concluded that large solar parks had a number of impacts on the microclimate.

“From spring to autumn, for example, soil under the panels was up to 5.2 ⁰C cooler, on average, than soil in the gap and control plots. Lower soil temperatures are likely to affect many important plant–soil processes, including productivity and decomposition,” her report read. Different climates will experience different effects. “Less solar radiation (which can stress plants) under panels in sunny regions… could actually boost plant growth, for instance. These sorts of impacts could be exploited for co-benefits for biodiversity or crop production.”

In an email to The Wire, Armstrong wondered why grazing and farming have been excluded. “In the UK, solar parks are commonly grazed with sheep, providing a win-win – sheep keep the vegetation down, negating the need for costly maintenance, and the farmer has somewhere to graze. In other areas, crops are grown under solar arrays as they protect them from excessive solar radiation, rain, and wind. With increasing pressures on land, finding such win-wins is increasingly attractive.” 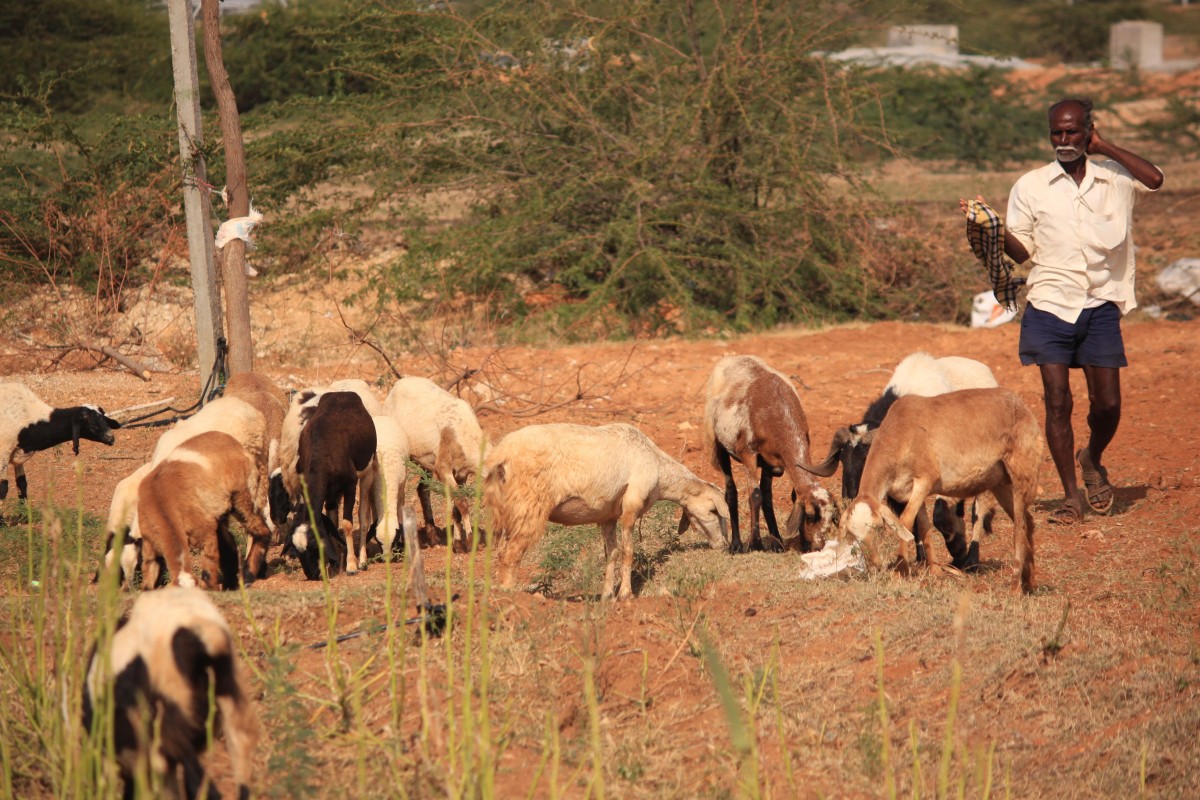 Solar parks also need large amounts of water to work at maximum efficiency. Some estimates say that each megawatt of solar power requires between 7,000 and 20,000 litres of water per wash, per week. Even one gram of dust per m3 of a solar panel can reduce its efficiency by up to 40%, reported another study. Only fresh water can be used, as hard water leaves salt deposits on panels.

The government has no set protocol and has no idea how much water the Pavagada Solar Park will use. “It is up to the private players who have installed their panels to find a source of water and use water according to their needs,” said Bhimsha.

In 2013, Leo Saldanha, an activist based in Bengaluru, petitioned the National Green Tribunal (NGT) against acquiring large tracts of land for developments in Chitradurga district, including solar parks, without environmental impact assessments. Some 10,000 acres were acquired, including 1,250 acres for a solar park that generates 25MW of electricity.

“When the rains fail, people living in semi-arid regions of Karnataka fall back on their livestock for wool. When you take away the land that is used, not only for agriculture but also for grazing and watersheds, you are breaking apart traditional livelihoods and systems of water conservation,” said Saldanha. “Solar parks are not only preventing rainwater from percolating into the ground, but also disrupting intricate systems of canals that help in recharging aquifers.”

Acting on Saldanha’s petition, the NGT in 2013 directed the environment ministry to revisit the exemption given to Sagitaur Ventures India, the company that is setting up a solar park in Challakere. In 2017, the MoEFCC reinstated its stance saying that that solar parks will not need environment impact assessment.

Mallika Arjun might be able to afford a wedding now, but whether his land will ever be the same is a question nobody has the answer to. “I now work as a security guard at the same plot where I once did farming. I am not sure what will happen after the 28 years. I can only think of my immediate needs.”

All images by Karthikeyan Hemalatha.

Karthikeyan Hemalatha is a freelance journalist based in Bangalore. He covers issues relating to the environment, climate change, agriculture and marine ecology.

tags: Karnataka’s Days in the Sun: The Paradox of Expanding Solar Parks
60
previous Suraksha ARC gets wind energy co hit by insolvency
next 10 GW Manufacturing-Linked Solar Tender May Be Scrapped