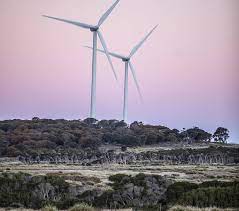 An up to 1.26GW wind farm proposed for Tasmania’s north-east has been declared a Major Project by the state Liberal government, making it part of a streamlined development assessment process overseen by an independent panel.

The massive North East Wind project is being proposed for development by ACEN Australia on agricultural land in Tasmania’s Dorset municipality.

The project would be built across two sites – Waterhouse in the west and Rushy Lagoon in the east. The traditional owners of the lands are the Leenerrerter, Pinterrairer, Pyemmairrenerpairrener and Trawlwoolway people.

The 210 turbine project is one of a number of wind farms currently proposed for Tasmania, as the state works towards its goal of 200% renewables by 2040, and to cement its position as the “battery of the nation,” piping renewables to Australia’s mainland via the proposed Marinus Link.

Epuron is working up plans for the 300MW St Patrick’s Plains wind farm in the central highlands, while in the north-west, ACEN Australia (formerly UPC\AC Renewables) is proposing Jim’s Plain and Robbins Island, which could have a combined capacity of up to 1GW if approved by Circular Head Council.

ACEN’s 1.2GW North East Wind project is just the second development to be assessed under the Tasmanian government’s relatively new Major Projects assessment process, the first being the New Bridgewater Bridge Project, which has since been granted approval.

Tasmania premier Jeremy Rockliff says that, having made the call on the North East Wind project, it will go through a comprehensive and streamlined assessment process allowing public input, “rather than the old planning process,” which he says is “simply unworkable” for projects of this scale.

“The North East Wind Farm Project …is just the type of large-scale, complex project for which our Major Projects assessment process was developed,” the premier said.

Tasmania energy minister, Guy Barnett, says the project, if approved, will have an estimated construction value of $2.7 billion and provide “significant and much needed opportunities for employment,” including up to 400 jobs during construction and up to 65 jobs ongoing.

“Tasmania can be the nation’s cleanest, smartest and most innovative state,” Barnett said in a statement late last week.

“What this means is that through the development of more renewable energy we will deliver jobs for future generations of Tasmanians, and ensure the cheapest form of electricity, renewable energy, supports growing investment and new industries here on island, while also supporting our country’s move to cut emissions and tackle climate change.”

For its part, ACEN Australia says it is keen to work with the local Dorset community and stakeholders on how the wind farm can deliver shared value.

“We’ve already been engaging with the local community and stakeholders for some time and importantly we will continue to do this throughout the development,” said ACEN Australia COO David Pollington in a statement.

“We are seeking inputs from the local community and stakeholders including Aboriginal representative groups, training and education providers as well as social enterprises to help shape the project.”

ACEN’s two other wind projects in Tasmania, inherited via the takeover of UPC\AC Renewables, have stirred some local opposition based on a range of concerns, including location, size, and impact of the supporting infrastructure that would need to be built to around it.

This includes the construction of a bridge connecting Robbins Island to mainland Tasmania, construction of a 500-metre piled wharf on the island’s north-east to take deliveries of turbine parts and equipment, and a new transmission line connecting to Hampshire via Jim’s Plain, where UPC\AC got the nod from the federal government.

Critics of Robbins Island range from local groups like the Circular Head Coastal Awareness Network and BirdLife Tasmania, to the founder and former leader of the Australian Greens, Bob Brown, who in 2019 said the project’s benefits were outweighed by its impacts on scenery and bird life.

In his statement, Premier Rockliff says the state’s new planning process will deliver an “independent, comprehensive and rigorous,” assessment of the North East Wind project, and provide “certainty and transparency to both proponents and the community.”

ACEN Australia’s Pollington says that the company’s significant construction investment is expected to bring with it many opportunities for local Tasmanian businesses.

“Once the project is operational, there will be long-term employment and service provision opportunities for the North East region and we have a commitment to employ and buy regionally where we can so we can keep the benefits local,” he said.

“For example, there will be likely opportunities for businesses to provide goods and services such as accommodation and catering, fencing, earthworks and landscaping, environmental monitoring, engineering, construction materials and equipment just to name a few.”

ACEN, or AC Energy Corp, is the listed energy platform of the Philippines-based Ayala Group, which in March increased its ownership in UPC\AC Renewables to 80%, on track for 100% by early 2023. The acquisition led to the rebranding of UPC\AC Renewables to ACEN Australia.

The company has just under 4GW of energy generation capacity in the Philippines, Vietnam, Indonesia, India, and Australia, 87% of which is from renewable resources.

In Australia, ACEN has this year set to work on the first stage of the 400MWh big battery energy storage system that is being built alongside what will be – for a time at least – the biggest solar PV project in Australia, the 720MW New England solar farm in the NSW Northern Tablelands.