Meet the man who is leading Australia’s EV revolution

Meet the man who is leading Australia’s EV revolution 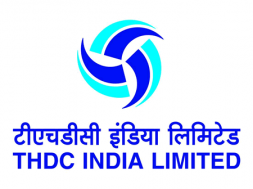 Does anyone recall a time when two blokes with a truck were just removalists, rather than ‘relocation solution providers’? It’s become one of those inescapable business buzz-terms, and everyone’s in on it. Your local coffee guy probably calls himself a ‘caffeine solutions provider’ on his LinkedIn page.

When naysayers throw up commonly held barriers to mainstream EV ownership in Australia, Washington has a steadfast, unshakeable determination to either hurdle over them or navigate around: “If we accept there’s only one way to achieve a zero-emissions transportation future – and that’s how I see EVs – then everything else is merely transitory; a distraction to arriving at that outcome,” he tells me. 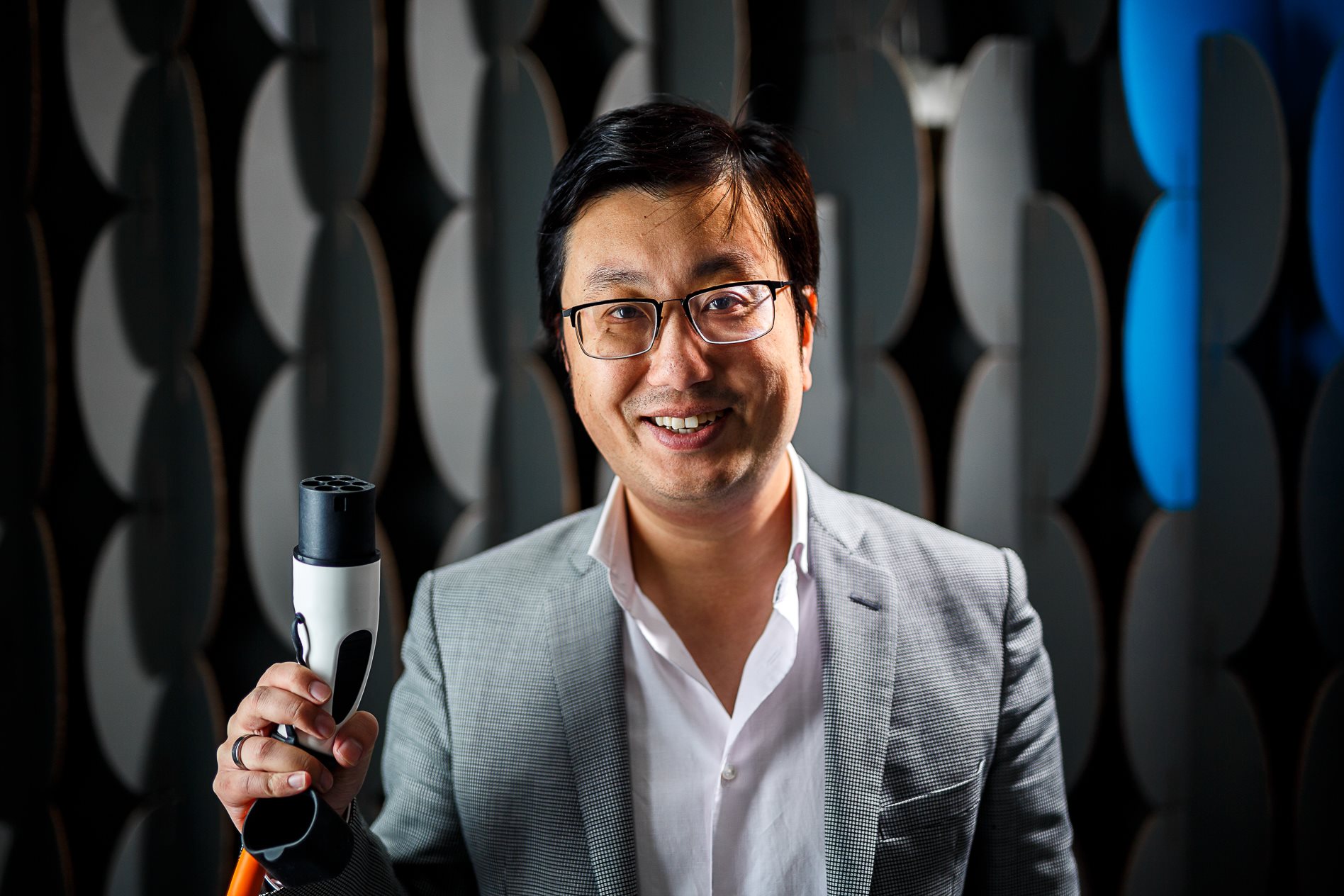 We’ll work through some of those hurdles shortly, but first we need to understand just how JET Charge is succeeding where others before it (such as Israel-based start-up Better Place) have failed.

Washington was born in China, but was brought to Australia at the age of eight by parents seeking greater opportunity. He was a high achiever at Melbourne Grammar, went on to study commerce law, and would later land a job at a large firm practising commercial law.

“I didn’t hate it as much as my colleagues did,” he smiles.

That career was powering ahead when he opted to leave it to join his mother’s business, which had grown from a small clothing manufacturing and importing operation to a large-scale player contracting to sports apparel companies like Adidas and 2XU.

Eventually, the rising cost of Chinese labour put pressure on the family company, so Washington and his mother Julia took the radical step of exiting, and Tim found himself excited by the prospect of a blank tablet on which to chisel the next phase of his career. He figured he’d “give himself a year or so, not worry about making money; just find the ‘next thing’.” 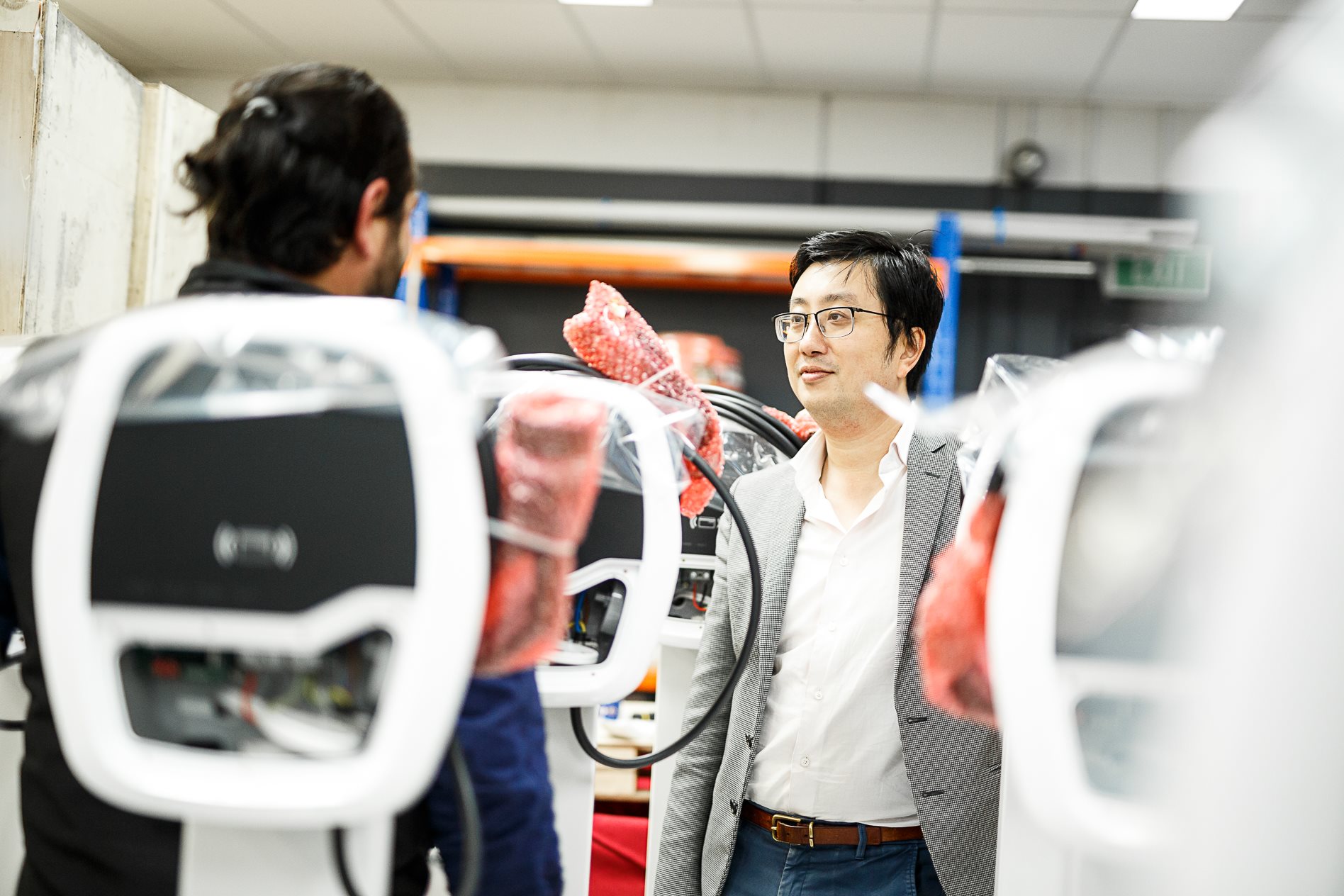 Whatever it was, he tells me, it had to be something that could make a difference. “My wife Ellen [also a lawyer] was adamant – she told me, ‘Tim, I’m not gonna bankroll you for just anything; it has to be something meaningful, something we’ll be proud of. You can’t just go and start another food-delivery app’.”

Washington had a passion for cars, a love of technology, and a sufficiently pragmatic business brain to not care about any perceived ‘sexiness’ factor in what he wanted to create. “I believe in tackling boring businesses because they’re not the shiny ones that everyone else looks for,” he says.

He could see, via the take-up of Nissan’s first Leaf, and the momentum behind Tesla, the inevitability of electrification in the automotive world. On a trip to EV-fluent Norway in 2011, the idea light bulb was fully lit.

“I came back and pitched the business idea to my friend Jay Robinson, who’s an electrician. I said, ‘Jay, I think there’s going to be a need for the specialist installation of EV charging.’

Despite the fact he had no real contacts in the automotive industry, and didn’t come from a trade background, Washington drew upon his considerable networking ability and business acumen to start seeking deals to be part of various OEMs’ ‘recommended installer’ programs.

Securing the Tesla account was a crucial early milestone, but wasn’t easy. “The only real way to get a line of communication [to the right people] was to buy one, so I pre-ordered a Tesla I still have today – a brown one. I was ‘reservation holder 166’.”

He installed a domestic charger, and gave Tesla staff a key fob to his home’s security gate and allowed them to use his charger as they ran their pre-launch test-drive program in the area. The business relationship and deal followed.

“That was fun; exciting, when Tesla first stared,” he reflects. 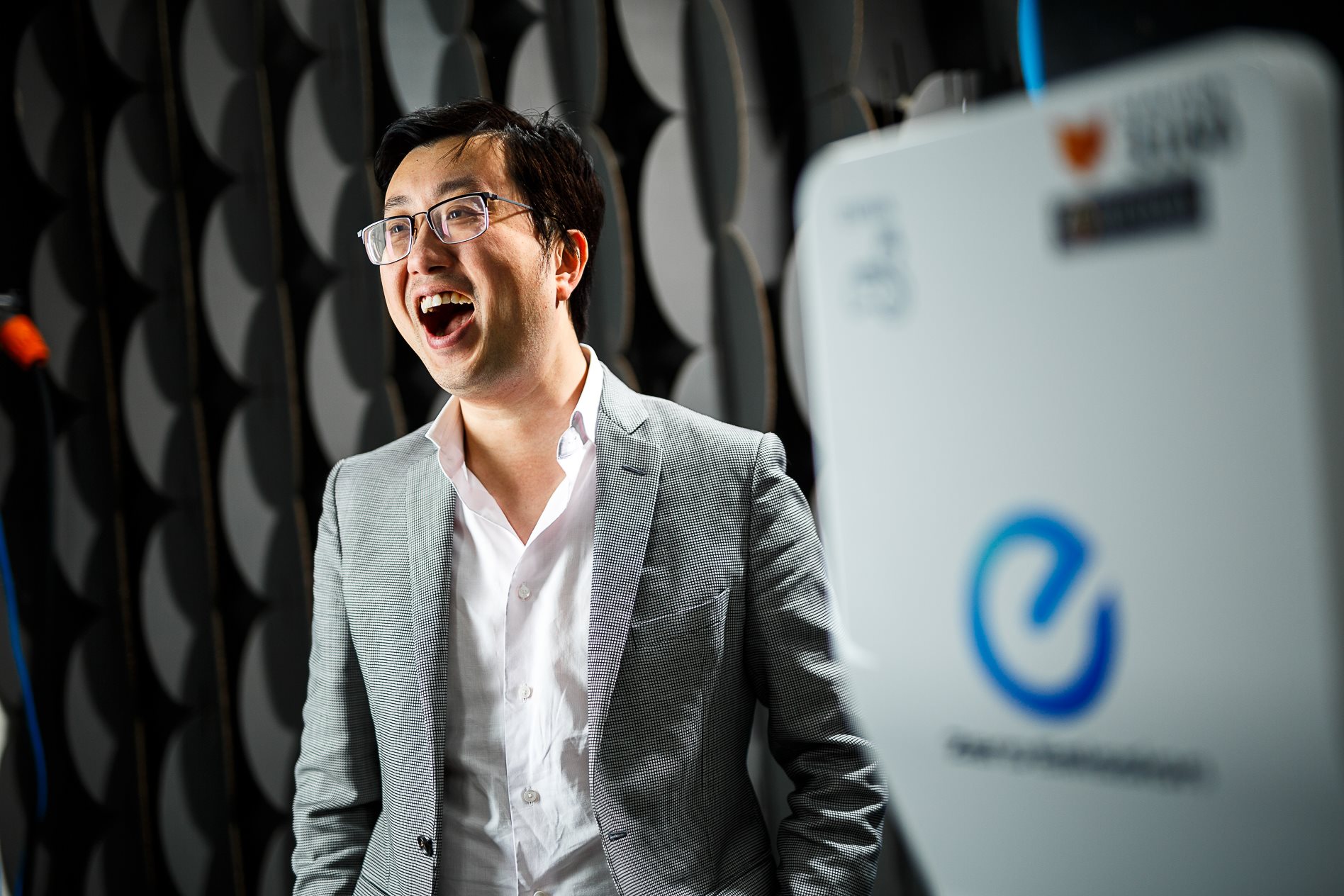 Still, the formative JET Charge was not exactly lighting the business afterburners. “We struggled for a long time because the market is so small,” he says. He recalls Aussie sales minnows like Holden’s Volt, the Panamera and Cayenne plug-in hybrids – “so it was slim pickings,” he smiles.

But then came Volvo, and a contract to handle the national dealer rollout to accommodate the hybrid T8. “That was the next milestone. Then we got Renault, VW Group, and the list grew.”

JET Charge would go on to tender for Nissan, securing charger supply and installation for 89 dealerships, as well as training and support. “We’re now the preferred installer for 13 brands,” he says, as if it was always a fait accompli. “We’re at 22 people now, and I feel like there’s significant room for expansion to meet our project pipeline.”

But then came the need for a separate business entity to handle both the development of IT technology for seamless, cross-provider billing and monitoring of electricity, as well as handling the larger, public-charger network installations that would be pivotal to real business growth. Hence the establishing (in partnership with software developer Cogent) of sister company Chargefox. Washington sits on the board and there’s close collaboration between the two businesses.

Chargefox secured $15m in 2018 to build Australia’s largest ultra-rapid network of 350kW chargers, via funding from the Victorian Government, as well as the various motoring organisations, like NRMA and RACV, among others.

But obviously Washington still spends plenty of time fielding media questions about whether EVs really are the automotive panacea to our transportation challenges. Common example: won’t greater take-up of EVs only shift the CO2 issue from tailpipe to power station?

“Okay,” he says, “but we have to ask ourselves, what’s the alternative? We can’t stick with the status quo. We need to be part of a transition, and the sooner we’re part of that, the better off we’re all going to be.”

But what about demand on the grid? Victoria was already stretched thin through this last summer with brown-outs…

“Yes, if unmanaged it will be a challenge for the grid – there’s no way you can add that much demand and not expect some issues at a localised level. But I want to see a future where EV charging is not seen as a stress to the grid,” he says, pointing to the Leaf’s ‘Vehicle to Grid’ capability. 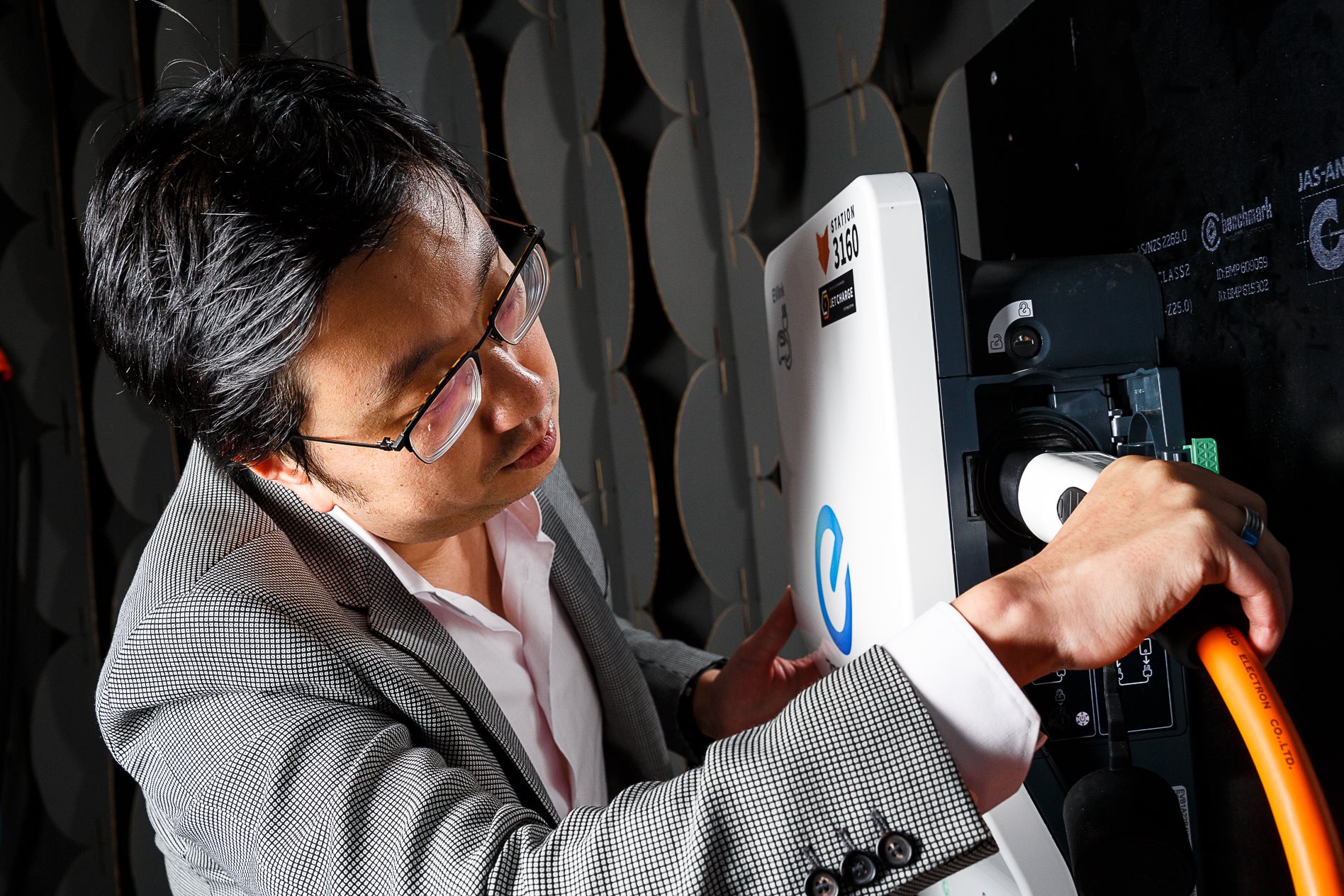 “In the UK, it’s about to become legislation that every home charger has to be Cloud controlled; that means you can be financially incentivised by the provider to use the charger in periods of lower demand. Without Cloud connection, the provider has no way to do that. Australia needs that tech for it to be controllable.”

As for JET Charge’s financial position, Washington won’t be drawn into revenue specifics, only to say that growth has been six-fold the 2018 financial year, and will double again over the 2019-2020 period. “We’re very optimistic about where we’re going,” he says.

So it looks as though his vision was well-judged. But far from seeing himself as a visionary, Washington sees himself a realist, just one bristling with commitment and determination.

“If you want to see where EVs are going, all you have to do is travel,” he tells me. “Look at what other countries are doing.”

As for ambitions to take JET Charge public, or undertake heady expansion plans, that’s not on the table.

“No, I want to work in the business for as long as I’m able,” he says. “I have a son; long-term, I want this to be a legacy business.”

As his wife Ellen said right at the start, “Any business you create has to do net good for society.”

And as everyone knows, wives are always right.

0
0   0
previous How these brothers started from scratch to build an EV manufacturing business in Bhopal, clock Rs 1.3 crore turnover
next Upcoming BMW electric motorcycles to get wireless charging