Japan can meet its Paris Agreement targets in 2030 and 2050—but doing so will require carefully calibrating efforts across four sectors: power, industry, transport, and buildings.

Signed in 2016, the Paris Agreement remains the most significant initiative to fight climate change. Participating governments around the world have committed to capping global temperature rise to below 2.0 degrees Celsius above preindustrial levels, with a stretch goal of limiting the temperature increase to just 1.5 degrees Celsius. These goals are ambitious, given that the current trajectory and rate of carbon emissions would result in a warming of 3.5 degrees Celsius by 2100.1

As part of this effort, Japan has committed to reducing greenhouse gas (GHG) emissions by 26 percent by 2030 and 80 percent by 2050—both compared with 2013 baseline emissions of 1,407 megatons of carbon dioxide equivalent (MtCO₂e).

How can Japan get there? In this report, we offer an overview of our analysis detailing the most cost-effective pathway for Japan to meet its commitments to decarbonization, the investment required to deploy the decarbonization technologies, and key enablers to get started.

We simulated the optimal (most economic) technology mix for the four key economic sectors in Japan—power, industry,2 transport, and buildings—which together contributed 79 percent of Japan’s total GHG emissions in 2016. From these sectors, an additional 300 MtCO₂e of abatement must be identified to meet the 2030 target (exhibit). 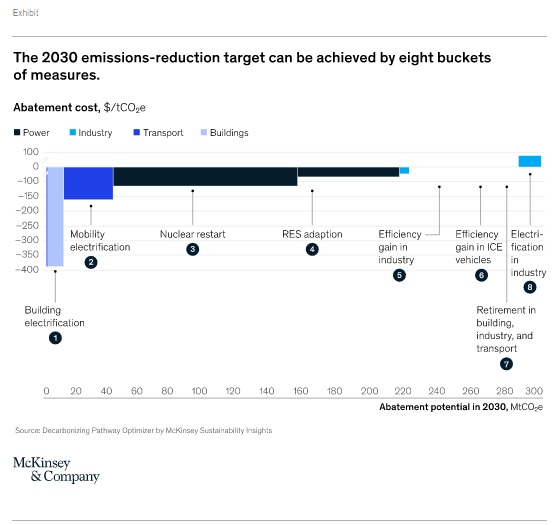 Our findings show that 95 percent of all abatement required to meet the 2030 target can be achieved through measures that are either cost neutral or result in lifetime cost savings. In terms of a dollar amount, $19 billion to $24 billion (approximately 0.5 percent of Japan’s 2016 GDP) of additional capital investment per year will be needed. This finding in particular suggests that Japan has opportunities to not only curb emissions but also maintain competitiveness in key decarbonization technologies and stimulate economic growth.

Download Meeting Japan’s Paris Agreement targets—more opportunity than cost, the full report on which this article is based (PDF–8MB).