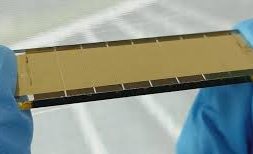 They described the special panel in “Design of Perovskite Thermally Co-Evaporated Highly Efficient Mini-Modules with High Geometrical Fill Factors,” which was recently published in Solar RRL. It has an active area of 6.4 cm2 and is based on co-evaporated methylammonium lead iodide (MAPbI3).

The researchers noted that a strong drop in the module efficiency – from around 19% to 15% – occurs when the cells are scaled up to 7.5 cm2. This is caused by FTO sheet resistance, which determines the drop in the fill factor. In order to address this issue, the scientists adopted a modular design based on the optimization of the size of the subcells and the dead areas.

“This made it possible to scale up 40 times the active areas of our thermal evaporated perovskite solar cell with a suitable perovskite solar module design power conversion efficiency losses are as low as just 0.7%,” Bruno explained.

They scaled up the size of the cells by maintaining a rectangular shape and a constant width.

“Both the careful design of the active areas and the high uniformity of co-evaporated perovskite film can guarantee minimal power efficiency losses during scaling up,” the researchers said.

“At the same time, minimizing the dead areas by reducing the number of connections and by reducing the width between the sub-cells can substantially increase the GFF,” researcher Subodh Mhaisalkar added. “Our laser-etching scribing process could guarantee a dead area width of 0.06 cm which can achieve a GFF of 91%.”

In previous experiments, the scientists achieved a GFF of 72%. The same group said in April that it had developed opaque and semitransparent perovskite solar panels that could be easily integrated into a range of urban contexts, including building facades, gates, and windows. The 21 cm2 mini panels are also made of perovskite solar cells based on methylammonium lead iodine (MAPbI3).