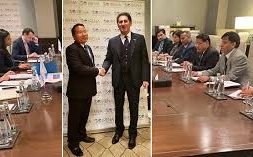 KATHMANDU : Minister for Energy, Water Resources and Irrigation, Barsha Man Pun, who is on a United Arab Emirates visit, today held a meeting with Francesco La Camera, Director-General of the International Renewable Energy Agency (IRENA) in the UAE.

On the occasion, the minister put forward a cooperation proposal in the development of renewal energy of Nepal, while thanking General Director Camera for inviting Nepal to participate in an international renewal energy conference in the UAE, he said.

The Government of Nepal aims to produce 15,000 megawatts electricity in the next 10 years, of which solar energy contributes 10 to 15 percent, he asserted. The government has established the Alternative Energy Promotion Centre (AEPC) for the development of solar energy.

Executive Director for the AEPC, Madhu Sudhan Adhikari was also present on the occasion.