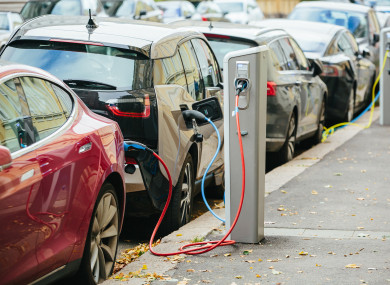 More electric vehicles and no congestion charge for cities: Here’s what you need to know about the new Climate Action Plan 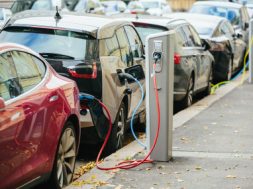 More electric vehicles and no congestion charge for cities: Here’s what you need to know about the new Climate Action Plan

A scrappage scheme to encourage the uptake of EVs is to be considered.

THE GOVERNMENT’S MUCH-ANTICIPATED Climate Action Plan has been published today, setting out a roadmap for Ireland and how it is going to meet its greenhouse gas targets.

Minister for Communications Climate Action and Environment Richard Bruton launched the report this afternoon alongside his ministerial colleagues and the Taoiseach Leo Varadkar.

Cabinet ministers arrived at the launch at the Grangegorman campus in a hybrid bus (only three departed in it after the launch. Minister Bruton got the Luas) before outlining a number of measures contained in the report.

So, what can we expect?

There is a big focus on electric cars, with the government aiming for 100% of cars on the road to be electric in 2030 – that’s about one million cars.

There doesn’t appear to be increased tax breaks for the purchase of cars but the Taoiseach said a scrappage scheme is being considered for the future to encourage drivers to get rid of their petrol or diesel car for an electric vehicle or hybrid.

Charge points for electric cars will be increased around the country, but in order to incentivise businesses such as petrol stations to install such points, the free charging that has been enjoyed by electric car vehicle owners will end. Local authorities will also be rolling out about 200 charge points nationwide.

While there’s no specific plan to encourage take up of EVs in the plan, Varadkar said the government will monitor market trends over next decade and introduce measures to increase EV sales.

Before the report was launched today, there had been speculation about the introduction of congestion charges for towns and cities, but that is not contained in today’s report.

When asked about it today, Transport Minister Shane Ross said:

“This is a rolling document – anything like that will be considered in due course, and certainly won’t be ruled out.”

The plan does outline government plans to expand the network of cycling paths and ‘park and ride’ facilities, which it states will help ease congestion.

As reported by TheJournal.ie in May, homeowners will end up paying for the retrofitting of their houses with a 10 or 20-year loan split across their energy bills.

A proposed pay-back system for the retrofitting of homes is being modelled on a similar scheme in the Netherlands.

A big focus in the plan is improving home insulation so that homes are warmer and need less heating, therefore helping the environment and saving homeowners on their energy bills.

The plan will also see clustered renovations in an area, so as to avoid a scenario of builders delivering retrofitting in a house one day in Fermoy, and the next day in Dundrum. This, it is understood, will be avoided due to the scheme ensuring that work be carried out in the same area or estate for a fixed period of time.

The government wants half a million homes to get to BER 2 energy rating by 2030. Retrofits will largely begin with social and public housing, before being extended to private dwellings.

There has been a good deal of chatter in recent months about a ‘boiler ban’.

As reported earlier this month, consumers will be able to sell excess electricity from their home solar panels back to the grid in the near future.

A microgeneration scheme will be put in place by the end of this year, with a view to commence an enduring support scheme by 2021 so that all people with solar panels can sell their electricity back to the grid.

The minister wants to raise the amount of electricity generated from renewable sources from 30% now to 70% by 2030, so there will be a big focus on foreshore wind energy.

There will be new funding supports for foreshore and offshore wind energy, and new legislation coming down the pipeline this year to streamline development.

Coal and peat energy will be phased out, with today’s report giving a timeline for the closure of such plants around the country.

The burning of coal in ESB’s Moneypoint generation plant will cease by 2025, states the plan, and Bord na Móna will transition away from peat by 2028.

The dates to phase out fossil fuels will “undergo an ongoing review,” the report states.

Carbon tax on the cards

There has been a lot of talk about the carbon tax, and it appears the government will sign up to the Joint Oireachtas Committee on Climate Change’s recommendation that it should be increased by €20 to €80 on a phased basis to 2030. However, there is no detail set out in today’s plan as to when and by how much the tax will be raised in the years ahead.

When asked about the issue, Finance and Public Expenditure Minister Paschal Donohoe said no decisions have been made as regards the “pacing” of the increases from between now and 2030.

There are plans to reduce landfill to 10% by 2030, with a focus on ending non-recyclable plastics. It is understood there will be a higher charge placed on producers, distributors and supermarkets to recycle single-use plastics, which the government sees as an incentive to get businesses to move to recyclables.

Agriculture gets off rather lightly in the report, with no mention of reducing the national herd size. There changes are based around improved breeding, changing fertiliser types and slurry spreading. There is a focus on land use and increased broadleaf forestry which the government believes will offset the carbon footprint of the agri-sector.

While the points mentioned do not appear to be anything new, there will be five-year carbon budgets set out for each department: if they fail to met their target, the department will have to ‘buy out’ the difference from their financial budget.

There will also be oversight committees and regular quarterly reports to government on the progress, with the plan being very much driven by the Department of An Taoiseach.

Speaking at the event today, the Taoiseach faced a number of questions from school children about the new plan and what it includes.

“For young people growing up today, one of their greatest fears is that the world will be destroyed in a climate apocalypse. It doesn’t have to happen. It’s not inevitable. It can be stopped. Action can be taken. And today, we say it will,” said Varadkar.