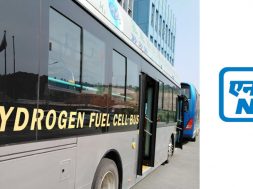 The move to procure Hydrogen Fuel Cell based vehicles is first of its kind project in the country, wherein a complete solution from green energy to the fuel cell vehicle would be developed.

The initiative, which has been undertaken with support of Ministry of New and Renewable Energy, will also harness renewable energy for generation of hydrogen and develop it’s storage and dispensation facilities as part of pilot projects at Leh and Delhi. The move to launch hydrogen powered vehicles aims at decarbonizing mobility segment.

The PSU has been taking various technology initiatives to provide complete e-Mobility solution for public transport including creation of public charging infrastructure and providing electric buses to State/City Transport Undertakings.  In this regard, 90 public charging stations in various cities and battery charging and swapping station at Faridabad for e-3-wheelers have already been commissioned. Similarly, e-Bus solution for Andaman & Nicobar Administration is under implementation.

The EOI can be downloaded from the following link: